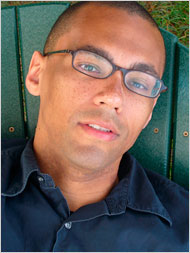 Victor LaValle is the author of two novels, The Ecstatic and Big Machine,  and a collections of short stories, Slapboxing with Jesus.  He is a PEN/Faulkner Award Finalist and the recipient of a Guggenheim Fellowship. His new novel, The Devil in Silver, will be published in August by Spiegel and Grau. We also spoke to Victor last winter.

I think we should try to define what we mean by political when we’re talking about literature. It seems like most people take it to mean literature with a message, like maybe Uncle Tom’s Cabin or Animal Farm, and they run screaming form the idea of writing such a thing. (Though, honestly, any writer would be lucky to come up with a book as widely read or vitally important to so many as either one was once.)

I choose to think of political novels that are also enduring works of art. Philip Roth’s Operation Shylock, Jane Austen’s Emma, or Gloria Naylor’s Women of Brewster Place. These are all political novels because they are, really, about how human beings navigate the systems that govern their lives. But where the bad political novel spends all its time detailing a system, the good political novel spends its time illuminating the human beings caught within that system. The former are doomed to become irrelevant as soon as this or that system is dismantled, the latter will endure as long as human beings grapple with power and powerlessness anywhere. But writers can’t be forced to create this kind of work. They have to want to. (And they have to be really good to make it work.)  So I can’t see that any writer has a responsibility to respond to the political and historical realities of the day, but I’m strongly in favor of the ones who try. (If they succeed!)

When I was younger I said I wrote for myself, but I don’t say that anymore. If I was really only writing for myself, why publish it? Now I think I write for all those people who happen to vibrate at the same frequency as me. That sounds a bit ridiculous, I think, and yet I mean it sincerely.

There’s only two critical responses to my own work that I enjoy: adoration or rapture. When it comes to other writers though, I love nuanced, thoughtful criticism, and I hate that there are so few outlets left to enjoy such things in print now. This is the age of the Volunteer Critic Army. It’s too soon to say whether this corps will produce memorable, insightful criticism but I have hope. There are many smart, well-read folks out there and they can all share their take on some author or some movement online. The only hassle is that each of us has to wade through so many half-baked opinions, or just outright stupidity, that it can be a bit disheartening. This is what the editors of many magazines and supplements once did for us, sifted out the bullshit, now that falls to each of us. But please believe me, the smart stuff is out there, too.

Being able to make a living from one’s writing alone is a fantasy that writers have been indulging for too long to count. A very small number of folks, in any time period in this country, have been able to pull it off and good for them. I’m not one so I, like everyone else, better hustle. That’s just life, my friends.

The individual is a lie. Or, rather, a noble ideal. I don’t believe such a being exists, Enlightenment be damned. It’s a condition one can aspire to, but never actually attain. Like true democracy. Nobody is expressing themselves alone, they’re expressing — at best — a few thousand years of the cultures and peoples they’ve been exposed to as interpreted by one being. I’m sure it’s a kind of heresy to say this, especially as an American, but it’s preposterous to pretend that I don’t reveal my allegiances in everything I write. I’m aware of some allegiances and not even conscious of others but they’re all revealed on the page, for better and worse.

American writing, and writers, have a hard time with politics, don’t you think? I mean that Americans as a whole don’t really have a culture of heated discussion between friends.  We tend to either grin and say nothing, out of a desire to be polite and non-confrontational, or we pick sides, fall into factions and howl at each other. (To say nothing of doing even worse.) But the idea of, say, long dinners where everyone in a family is arguing with each other, disagreeing about this or that political/ideological point, voices raised and epithets hurled but still ending the night with closeness and warmth, seems largely foreign. (Or the way of “foreigners.”) I know I’m speaking broadly here. As a whole we Americans don’t raise our voices, we just shut our doors. So that makes it tough for a culture of meaty political conversation — whether in person or on the page. I’ve been trying to change that tendency in myself, in my writing but even more so in my daily life. Not sure if I’m improving yet, too early to say.

The responsibility of a writer is to communicate with readers, whether it’s entertainment or something more challenging. The job is just to communicate. That may sound simple, but it isn’t. I’ve written whole early drafts of stories, even novels, that communicated nothing. Those things were just lots of words. The responsibility of human beings though — writer or not — is to advocate, in some way, for the world he or she wants to live in. That kind of change rarely comes from writing. It requires real action of some kind and usually writing, even at its most thrilling, is still just someone sitting in a chair.