The Book of Happenstance – Ingrid Winterbach 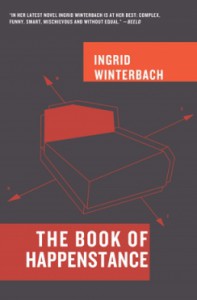 Tr. from Afrikaans by Dirk and Ingrid Winterbach

If there is something both moving and reassuring about looking back to the classics, to those texts, paintings, and sculptures of beauty that both precede and will surpass our lives and at the same time speak to us at a human level, what then do we make of the shell? The shell, temporary home for undersea creatures, ballast for plastic pails, is for Helena Verbloem, narrator of Ingrid Winterbach’s recently translated The Book Of Happenstance, much more. The shell, like a great work of art, is an object of aesthetic importance, a testament to nature’s ordered magnificence, a classic of evolutionary creation. More than that, it is, for Helena Verbloem, a bastion of sense amidst the chaos of the world; it is “rhythmic and balanced. So different from our human lives, which are neither rhythmic nor balanced, but for the most part chaotic.”

A lexicographer by profession, Helena moves across South Africa to the city of Durban to assist in the creation of a dictionary of Afrikaans words that have fallen out of use. She revels in cataloging, in discussing the evolution of humans with a paleontologist who also works at the Museum of Natural History, and her shells sit in neat rows on a table beside her bed. But when this beloved collection of shells is stolen from her apartment, Helena’s life is thrown into disarray. With the help of her friend Sof she vows to retrieve them at whatever cost, but in a novel that begs for action, Helena is rendered immobile, caught like Hamlet in a stasis between her ghosts and demons. The novel pushes up against its own narrative impulse, as though seeking to carve out a space of momentary stillness against the processes of change inherent in stories, lives, and the evolution of species.

It’s not that nothing happens in The Book of Happenstance but that no progress is made. Helena and Sof snoop around, go undercover as members of a Bible society, and, in search of leads, have run-ins with some colorful characters, including a group I Ching-consulting gang members. Throughout the novel Helena struggles to come to terms not only with the missing shells, but with the painful memories dredged up by their loss, of her parents’ pasts, her dead sister and her failed relationships, and with the place of her sorrow, of all human sorrow, in a universe governed by happenstance. “On one hand I feel myself moved by the drama of evolution, and on the other by the drama of my stolen shells.” Personal loss is thus rendered with a sense of vertigo against the backdrop of evolution, next to which a human life, a human loss, is infinitesimal. “Simply because I (and all other things) exist, I think that my existence is inevitable. That everything is the way it is supposed to be. But that is, of course, not so. In evolutionary terms that is the first of many erroneous assumptions.”

Like many of us, Helena seeks answers in origins, in the stories that science and religion have to offer. We tell stories, we do science, and yet these are things which only teach us more about the un-narratable, the un-catalogable. We cut at the joints but the cut is never clean. Winterbach brings the reader face to face with their own apophenic impulses to find patterns of significance in randomly assembled fragments. We look for clues, we hope to connect the dots that Helena, caught up in her obsessions, cannot, to find the lost shells, to restore order.

“Should a novel come to a final conclusion? Should it pitch towards resolution?” Sof asks Helena, “Does life move towards resolution? […] Is anything ever concluded? Has that been your experience?” Apparently not, because when the novel ends nothing has been solved; the shells remain lost, Helena has not overcome her despair, but merely replaced in with an uneasy resignation. But while The Book of Happenstance may be an obsessive book about obsession, about loss and desire and randomness, Winterbach spins out of these fragments a work infused with humanity that is at times funny and at others sublime, but always beautiful and moving. She makes a case for the stories we tell ourselves despite their constructed nature. “I want to cast myself into the specific, the subjective, the small, transient human moment, that I may be deaf to the immense rushing of time passing in my ears,” states Helena in words that could very well describe Winterbach’s project. Although we may, as science suggests, be the result of coincidence piled upon coincidence, with as little control over our fate as the shell, we still retain the power to analyze and imagine, to “contemplate and fantasise about this fate.” If this isn’t enough reason to treasure storytellers like Winterbach, I don’t know what is.