Red Lemonade, a new press I am very, very, very excited about, has officially launched! Founded by the great Richard Nash, Red Lemonade, is “the first Cursor-powered social publishing company”  and “the first of the fifty thousand publishers Cursor will power in the years to come.”

Red Lemonade is not just a press; it’s also an online community. All of its books are published online, as well as in print, so users can comment, annotate, and insert marginalia on the texts. So far, Red Lemonade has published Lynne Tillman’s Someday This Will Be Funny and Vanessa Vaselken’s Zazen. Tillman is one of my favorite writers; I’m halfway through Someday and, thus far, it’s a book I can’t recommend highly enough. We’ll be covering Someday This Will Be Funny and everything else Red Lemonade publishes in the coming months. Here’s (most of) a statement Nash published on Wednesday:

Publishing is saddled with this terrible reputation for being reactionary and Luddite, our denizens known largely for caviling against technology and the new-fangled. It is perverse, truly perverse since publishing is in fact at the center of two major social revolutions that dramatically disrupted the status quo ante.

The first, printing, we all know and understand to a degree, but let me remind all concerned, pace Clay Shirky, that printing upended the established religious and political orders in ways that radio, television entirely failed to do—these latter media being readily co-opted for propagandistic purposes by the existing political and economic powers-that-were-and-are.

The second, retail, is rarely discussed but booksellers were the first retailers to take their product from the back room and place it on shelves on the other side of the counter, for the public to see, touch, peruse. The consumer centric approach to retails starts in the book business too.

So the seeming radicalism of the Cursor project, as expressed here at Red Lemonade, is not contrary to the historical spirit of publishing but consonant with it. Being opposed to technology is profoundly at odds with the book business because what is the book but technology, technology that has been smoothed and sanded by repeated contact with human society into the most comfortable technology we have, as taken for granted as our clothes, product of the looms.

I pick looms for this reason because it was the Industrial Revolution that produced the great rupture that bedevils publishing today, the abandonment of an artisanal mode of production/consumption for an industrial one, which took the highly social acts of writing and reading, almost equally performable by anyone provided they were literate (a significant proviso of course), and rent it asunder. Writer alienated from reader, writer from writer, reader from reader. Atomized. And in so doing created a system that was at its most profitable, because of the relentless logic of economics of scale, when there were the fewest number of writers, at its most profitable when the various phases of production and distribution could be handled by highly specialized entities and individuals, none of whom understood what the other was up to, a Fordist model of production combined with a Sloanist management model.

We have tended to speak of the model of publishing for the last hundred years as if it were a perfect one, but look at all the indie presses that arose in the last 20 years, publishing National Book Award winners, Pulitzer winners, Nobel winners. What happened to those books before? They weren’t published! They. Were. Not. Published. Sure, some were, but most? Nope. We cannot know how much magnificent culture went unpublished by the white men in tweed jackets who ran publishing for the past century but just because they did publish some great books doesn’t mean they didn’t ignore a great many more.

So we’re restoring the, we think, the natural balance of things the ecosystem of writing and reading. The writers read, the readers write. The About page and FAQ describe and elaborate on how we do this—the books speak for themselves, as they always have. You will have questions that these pages do not answer, so contact us. We don’t pretend to have all the answers but we’re going to organize and contend with the important questions: How do we avail of our collective intelligence to make better publishing decisions? How do we provide mentorship and advice while avoiding cronyism? How do we harness the power of the gifted editor? How do we unlock more of the great value books create in our society, so that we can all afford to write and read better?

You have the answers, not me. The site has feedback mechanisms everywhere, you can comment on this post, on a manuscript, you can create a conversation, you can create marginalia, reply to comments, you can see what we look like, hear what we sound like, you can find our names and email addresses, we will listen, we will respond, whether on matters technical or administrative or cultural and together we will restore books to their leading edge positions, once again transform social relations, once again launch revolutions.

For those keeping score at home, I’ve praised Red Lemonade before and, for the two people who wondering: yes, Nash’s decision to create Cursor and Red Lemonade helped inspire this site.

“The Story of Red Lemonade,” by Austin Kleon: 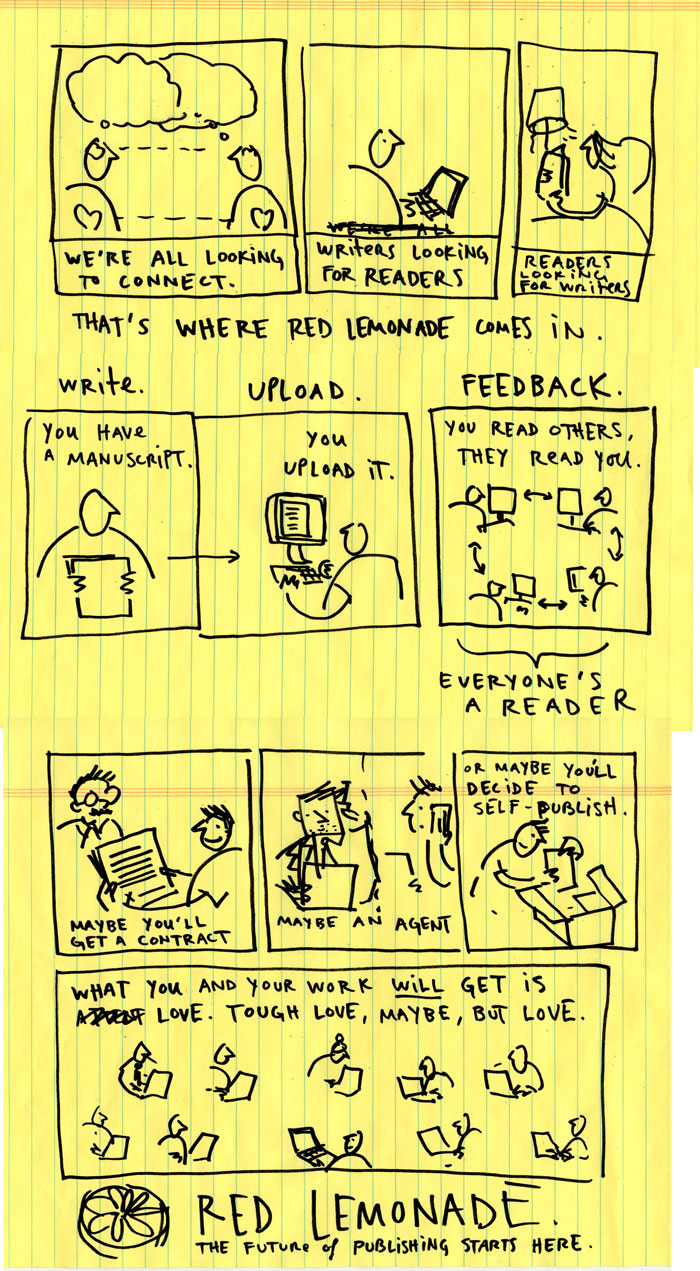