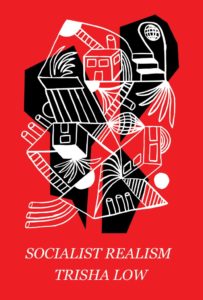 It’s a stimulating pleasure to follow in fits and starts Trisha Low’s ideas and arguments of what it means to be hungry or what it means to be a housewife, and to adumbrate connections that emerge as she dissects the layers of the world as if it were an onion that naturally produces tears. I appreciated Low’s willingness to go far, but not further, laying things out bare without spreading any legs, showing me the guts without paying attention to the empty belly. There is something fascinating in her ability to analyze so clearly, something elegant in her preventing a mess from being one. There is something concrete about having sturdy containers that are able to hold whatever you pour into them. I enjoyed the sense of detachment and the bluntness with which she shared her most intimate feelings. I thought it was candid to write: “Late at night. I am fighting on Gchat with Staiti, and I am sobbing so hard I have to leave the computer. I can’t stop. My body, fragile and sloping. I call the suicide hotline, more out of curiosity than anything else.”

There are many moments in this book that are like this. Confessional, intelligent. Sometimes the moments are funny. But in the end, in their totality, after 158 pages, those moments pushed me to not care. I was really glad to be done with this book. Yet, when I went back for writing this review and opened pages randomly, I enjoyed the paragraphs I read. So why do I like the parts but not the whole?

It might have to do with form. It might have to do with length. It might be me having not grown accustomed yet to the flow and structure of the book-length essay. It might be me comparing the book-length essay to a conversation with an engaging acquaintance in a coffee shop that should have ended an hour or two before we finally parted. It might be me not knowing if this acquaintance was supposed to be a friend or a professional contact, it might be me feeling uninspired about that strange pressure of having to spill and spill until we are utterly exhausted, emptied and saddened by the fact that we haven’t gotten to know each other any better.

It might also have to do with expectation. I initially picked up the book because I responded to the title with strong curiosity: Socialist Realism. The words “revolution” and “utopia,” on the back cover called out to me like sirens in the open sea. It’s hard to resist the lure that comes with words like these. That Trisha Low grew up in Singapore with family in Hong Kong and is now living in the United States sounded like an intriguing position to give perspective on these concepts.

So what happened? Or how did it happen? The book starts out by questioning how to culturally and socially define, practically create, critically view, or personally relate to the idea of “home.” Is home a real thing or is it located beyond reality? Is it something one can have without other people? Who makes up a home? Should one want it, or is it better not to want it? How has the home been written about? How is it depicted it in the movies? What does a housewife do at home? What does dreaming do at home?

Home — it’s always been the dream. But what composes it? Wanting to belong somewhere, to feel comfortable returning to a place? Home is conceptual, immaterial.

From home the text moves on to house, from house to father, and from father to structure and shape, architecture, eventually back to memory, mother, and father.

When I was a very little girl I lived in a house that looked like a ship, sleek and beautiful. In it, my father told me stories about what he built. Restaurants, cars, businesses — he had built them all for me. The lives of fathers; what they do for their daughters.

House as a shape of home. Destiny as a shape of the future. Future as fulfilling forms. For the narrator’s father “going West,” learning how to do things better than at home, and then returning back to Singapore to continue what he had started, is a way to improve his life, that of his daughter’s, and the family business.

How do we experience form and structure? Do we see it? Do we act it out? Do we learn seeing form and structure in art museums? If art is a way of living or if living is a form of art, could a museum count as a home for art? Do artists feel at home in museums? The narrator visits LACMA and looks at Chris Burden’s Metropolis II from 2011. The sculpture depicts an imaginary city traversed by thousands of gravity-powered, custom-cast cars and electric trains.

The piece is mesmerizing, but I roll my eyes. I look away. Burden has managed to build the most intricate shrine to infantile masculinity I’ve ever seen. I hate it.

Trisha Low likes Chris Burden’s early performance work better. “Back then he was a master of calibrating scenarios that expose the arbitrary structures that hold us and force us to arrive at the crux of institutional fallacy.” Her favorite performance piece is called Doomed from 1975, in which Burden lay under a sheet of tilted glass for forty-five hours and ten minutes on the floor of Chicago’s Museum of Contemporary Art. Only when a museum employee, concerned for his life, set a glass of water next to him did he smash a ticking clock and end the performance.

Doomed is my favorite Chris Burden piece because it’s not purely nihilistic, but rather demonstrates the dual absurdity and potential of human action, human ambition.

The book moves on. Jumps back and forth in time and content. More memories from childhood. Learning English. “My elocution means I become a model child for the new government Speak Good English Movement.” More thoughts on Chris Burden, the adolescent part of it. “It’s a calculated flirtation with the limits of cruelty and destruction. His self-inflicted injury has no real-world stakes, it doesn’t take much risk.” She assumes that an art-world payoff is assured to his actions. “It’s easy to be Chris Burden.”

I don’t think it’s easy to be anybody in this world, Chris Burden included. I look up the artist’s performance called Shoot from 1971, staged during the Vietnam war. Chris Burden’s description of the piece goes like this: “At 7:45 p.m. I was shot in the left arm by a friend. The bullet was a copper jacket .22 long rifle. My friend was standing about fifteen feet from me.” November 19, 1971; performance at F Space, Santa Ana, CA.

I am moved by the fact that Chris Burden had a friend who would do that for him. I salute the friend, whose identity has been kept secret for many years. Chris Burden’s friend makes me think about the narrator’s lover Staiti. Staiti is mentioned here and there, but doesn’t develop into a complex character throughout Socialist Realism. The reader learns that their pronoun is they, that they often act as the driver, that the narrator needs to get fucked by them on occasion, that they sometimes fight, that the narrator cooks for them or worries about their late home coming. I feel disappointed for the missed opportunity to learn more about Staiti. I have a moment when I think it’s really not fair to describe Staiti like a domestic helper who makes sideline appearances to furnish a particular ambience or lifestyle. But maybe this is intended? There must be a good reason for holding back on Staiti. Keeping the identity of Chris Burden’s friend a secret was done to protect him from being charged by the law for purposefully aiming and shooting at a person with a rifle. The reason for Trisha Low to reveal so little about her lovers might be a method of forging desire. Desire is a reoccurring theme in Socialist Realism. Does one hold back in order to produce it?

I think good love scenes should be about something other than love. I want to value our nebulous not-knowing. I want to eschew the routine of home. I want to walk the suspicious spaces we stake out between desires. Our inconstancies as they are formulated, processed abandoned. Is this possible?

I cannot pretend that I can clearly articulate what in the second half of the book happened that began to frustrate and bore me. It might have had to do with pattern-recognition, a looming predictability in how subjects like struggle, nostalgia, utopia, revolution, identity, race, realism . . . etc. would continue to flow into Trisha Low’s stream of consciousness to be tumbled and washed, swirled and flushed, and then discarded making room for new subjects to be treated in a similar way. I started to lose interest, not in the subjects themselves, but in the repetitive and increasingly impersonal way in which they are treated.

The narrator of Socialist Realism comes from an extremely wealthy family, and I laughed over the humorous passage when her mother calls her from Singapore to demand that her daughter drives, or is driven, to a designer store in San Francisco to purchase a rare designer hand bag for twenty-five thousand dollars. I was curious to learn what the children who occasionally resent their parents for their wealth think of utopia and revolution and how they get it started. I assume, maybe very naively, that they have different means to do it than the poor. I want to know their methods, their motivations. Since I was politically indoctrinated growing up in a socialist country, I always had a fascination with plotting out imaginary scenarios of how one could forge powerful allies on the other side. I always knew we could never do it alone, we would need some people on the other side, we would need our enemies to become our friends, it had to be a wide variety of influences and a thorough inversion of established values to bring the system down to rejuvenate it into something new and healthy. Somewhere deep down I hoped that Socialist Realism would offer glimpses of where to find these allies now and how to approach them. And Trisha Low gets exactly to that point, when she quotes:

In writing about early Soviet artistic culture and emergent forms of socialist realism, Robert Bird and his co-editors also state that “aesthetic strategies for fostering revolutionary intimacy over distance and across national borders” were the priority in a system that wanted to engage comrades across the world. That if revolution was going to happen, it would come into being “not through its amplifications, but through its repetition in countless intimate gestures, not as a totality, but as a series.”

I’ll take this as the lesson from Socialist Realism and stop here. Maybe it’s not important to like the book as a totality. Being intrigued and inspired by little parts may have been all that was appropriate at this point, all that was possible right now. Maybe this is, more than anything else, about a series of starting points. We have not started fighting yet.

Franziska Lamprecht is an artist who started writing as an extension of the long-term process based works, she produces together with her husband Hajoe Moderegger under the name eteam. Their projects have been featured at PS1 NY, MUMOK Vienna, Centre Pompidou Paris, Transmediale Berlin, Taiwan International Documentary Festival, New York Video Festival, International Film Festival Rotterdam, the 11th Biennale of Moving Images in Geneva, among many others.