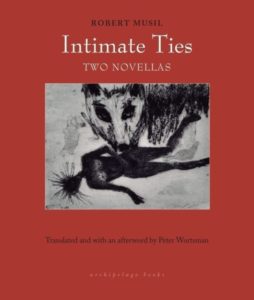 Tr. from the German by Peter Wortsman

What’s the difference between a foreword and an afterword? I mean, one comes first, one comes after — but how do these parts of a book really function? This question has been on my mind since I read Peter Wortsman’s afterword to Robert Musil’s Intimate Ties. In the translator’s commentary on these two novellas, first published in German in 1911, there’s a warning: “Read at your own risk.” Of course, it’s too late: the risk has been run, the novellas read, if not totally understood. Who reads the afterword first? I understand that Archipelago, the book’s publisher, might not have been eager to slot Wortsman’s warning at the start of Intimate Ties. It’s hard enough to sell translated fiction to an American audience. But Wortsman’s comments — and the historical context he provides — should perhaps have come in a foreword. In the case of these two exceptionally strange novellas, the historical context is important, and unfamiliar to most American readers.

Austrian modernist Robert Musil is famous, to the extent that he is famous at all, for his unfinished magnum opus The Man Without Qualities. The novel was published in German in the 1930s and 40s, and, at over one thousand pages, the book is not often read or taught in the US. Musil’s other works are more approachable. His debut novel, The Adventures of Young Törleß, published in 1906, was a critical and popular success. The book’s style is expressionistic, and weighted with ideas, but there is a clear story. A Bildungsroman, The Adventures of Young Törleß charts the protagonist’s experiences at a military boarding school as episodes of bullying devolve into psychological and sexual abuse. As well as being an especially brutal entry into the canon of boarding school literature (which makes A Separate Peace look as tame as Harry Potter), Törleß is notable for the way it seems to prophecy German fascism. For the curious reader, though, the obvious place to start is Posthumous Papers of a Living Author, the last book Musil published before his sudden death in 1942. The book’s short pieces—also translated by Wortsman — highlight Musil’s distinctive style and the quality of his thought. And because the book, unlike Intimate Ties, contains not the slightest red herring of a larger narrative, the reader can let go of the desire for plot and enjoy the flow of Musil’s language.

The pair of novellas that make up Intimate Ties took two and a half years to write, a period full of crises, stops and starts, and self-doubt. As Wortsman writes in his afterword, Musil struggled to follow up The Adventures of Young Törleß.  When Intimate Ties was finally published, the book was a flop. Later in his career, Musil would dismiss the novellas as a failed experiment, while admitting that he still thought fondly of them: “I can’t stand extended passages. But I’ll gladly dip into one to two pages anytime.” Its primary fault, he wrote, was its “binding, back cover, pagination.” He proposed that

A few pages at a time should be spread out and displayed between glass plates, the selection to be changed every now and then. Then you would see what it is.

Flipping through the novellas, it’s easy to see what he means.  Certain moments — certain images — are striking, precise, and lovely, if a bit overwrought. A voice is “light and high as a tin rooftop.” A man stands quietly behind a door, “creaking like a tree beneath its bark.” And, in passages of interiority, Musil gets at the mystery of being alive in the world:

Every day you go walking among particular people or through a landscape, a city, past a certain house, and this landscape or these people always accompany you every step of the way, they’re just there without wanting to be, day in, day out.

What Musil does beautifully here — what he does, consistently, in his best passages — is chart the border between inside and outside worlds, illustrating the tension between what’s in our heads and what’s actually out there.

It’s this tension between the interior and exterior that animates The Culmnation of Love, the first novella in Intimate Ties, and the more conventional of the two. The style is dense, marked by stream-of-consciousness, but as with other modernist works — Mrs. Dalloway, Ulysses — the tight constraint of time and place help the reader follow the story. Claudine, the married woman at the center of The Culmination of Love, takes a train to visit her daughter at a boarding school in a small town in Austria; the whole story takes place over two or three days. The simplicity and clarity of the action — departure, train ride, arrival, time spent at an inn — provides much-needed grounding.  As does the snow, which often serves to snap us out of Claudine’s imagining and into the world:  there’s snow “soft and heavy like a wall upended in mid-air,” and in the village, it sounds like Claudine is “walking on glass.” The plot, like the set-up, is simple. Claudine meets a man, finds herself attracted to him, and struggles against the temptation. For much of the novella, Claudine’s consciousness unspools on the page:

And it felt as though she were standing out in the open, far from everything, surrounded by those sounds swirling in the air and the still clouds overhead, his utterances digging deep into her here and now, and she were nothing more than the sum total of these stimuli, tugging reverberating . . . she felt at that moment that she fathomed the love of animals . . . and of the clouds and the murmurings of nature. And she sensed the eyes of the undersecretary searching for hers . . . and took fright and badly wanted to get a hold of herself, and suddenly felt her clothes covering the last remaining shreds of tenderness . . . “

And on, and on — this particular burst lasts for nearly a page. And what makes these passages work — when they do work — are the jumps back to the external world. Right after the passage quoted above, for example, we read: “Later she sat in the dining room. It was evening. She felt alone.” These plain moments, sitting beside the deeply interior, provide a kind of momentum. And these transitions, for me, are the most invigorating moments in The Culmination of Love.

In the second novella, The Temptation of Silent Veronica, the outside world has almost entirely vanished. There are names, but they seem like floating signifiers — there are no bodies. There is no physical space. No recognizable span of time. There’s just Veronica, and the two young men who compete for her affections, Johannes and Demeter. And something is happening. Or something has happened. The clearest sections of the novella, oddly, are not what occurs in the present, but what has happened in the past: Veronica has had a traumatizing encounter with a sexually aroused Saint Bernard. This experience, we are made to understand, has come to define Veronica’s present, keeping her from reciprocating the affections of her suitors. This is pretty much all we have. The lack of narrative signposts makes Musil’s ornate style even more difficult than usual to sink into.

Read in the broadest terms, in the context of literary modernism, Intimate Ties seems especially concerned with the psyche, sexuality, and repression. Fifty years before, Flaubert’s Madame Bovary had proposed a kind of sociocultural pull luring Emma into infidelity — romance novels, sentimental stories — but here, in The Consummation of Love, Claudine takes a lover for reasons that are muddier, more internal, harder to parse. Musil seems simultaneously fascinated by the specter of psychoanalysis (see: the sexually aroused Saint Bernard) and dismissive of its simplicity. As deep as we are in the consciousness of these characters, we rarely understand why they do what they’re doing, because they don’t understand this themselves.

Peter Wortsman admits, in his afterword, that he “cried out with joy and relief” upon finishing his translation. While I hate to admit it, I felt much the same when I reached the end of Intimate Ties. These novellas are for students of Musil, students of German literature, and students of modernism. These novellas are for the completist. The Neil Young fan who actually listens to (and enjoys) that album sung through a vocoder — although maybe this is a bad analogy: Robert Musil has no Harvest. My point is, difficult works of art tend to require some context. They often benefit from a preface, a foreword. If you’re motivated to listen to Neil Young’s album Trans, it’s helpful to know that the vocoder reflects Young’s attempts to communicate with a son born unable to speak. If you’re driven to immerse yourself in the verbal tumult of Intimate Ties, it’s good to understand the unique place of these novellas in Musil’s oeuvre. And so, I offer a warning: read Wortsman’s afterword first.

Ben Sandman was born and raised in the Catskills in upstate New York. A graduate of Vassar College, he earned an MFA in fiction from Oregon State University and is currently a PhD student in creative writing at the University of Cincinnati. His stories have appeared in Stirring, The Susquehanna Review, The Allegheny Review, and Stone Canoe.