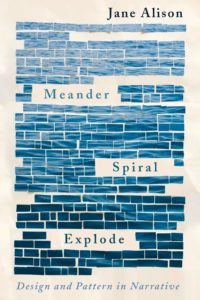 In the epilogue to Meander, Spiral, Explode, a book that ostensibly tries to make a case for unconventional form in fiction, Jane Alison writes:

So often, fictions that experiment formally do so at the expense of feeling. They toy on surfaces or are purely cerebral affairs, don’t explore human complexities. But the mostly unconventional narratives I’ve been discussing have dealt powerfully with core human matters. . . .

This is not an uncommon accusation against experimental fiction, but usually it is made by people without sympathy for formally adventurous fiction, not writers who have just otherwise expressed approval of work that seeks out alternative narrative strategies in a book about such strategies. It almost seems as if Alison is worried that readers might confuse the kind of writing she has discussed for that arid “game-playing” sort of fiction with which “experimental writers” are most often identified.

But exactly how “often” does experimental fiction sacrifice “feeling” for formal invention? Who exactly does Alison have in mind as writers who “toy on surfaces” (which is a rather peculiar complaint in a book that extensively praises the work of Nicholson Baker), or produce “purely cerebral affairs”? Perhaps it is unfair to ask the author to name names in a brief epilogue such as this, but since Alison does include among her book’s exemplary cases a few writers (B.S. Johnson, David Foster Wallace) who could be (and are) accused of being too frivolous or too “cerebral,” her insinuation that a certain (vague) kind of experimental fiction is too bloodless makes the question seem apposite. If Alison’s analysis can be applied to, say, David Markson (also a focus of attention in one of the chapters), then presumably we might find as well that “postmodern” innovators such as John Barth, Gilbert Sorrentino, or Steve Tomasula (the sort of writers I suspect are the targets of Alison’s indictment) can be approached through her interpretive frame. That Alison doesn’t give us the particulars we need to adequately assess the distinction she’s making ultimately means we can’t really fully assess the scope of her whole critical project in Meander, Spiral, Explode.

The closest we can come to making such an assessment of Alison’s assertion is to consider the emphasis she puts on “feeling,” on “human complexities,” and “core human matters.” Presumably these are essential elements missing from game-playing experimental fiction and that she is assuring us we will find in the works she explicates in her book. Indeed, since formal experiment characterizes both these works and the other, flawed kind of experiment, it must be this concern for feeling, the attention to “core human matters” that most distinguishes her chosen writers and their works. The effort to “experiment formally,” then, is, or should be, one that finds the right form — beyond the usual “narrative arc” — to communicate feeling and render human complexities, presumably the true goal of art. While it is tempting to adduce a list of experimental writers (the “wrong” kind) whose work is profoundly concerned with “human complexities” and “human matters,” that would again only belie the fact that Alison gives us no examples with which we can contrast the treatment of “complexities” and “matters” to be found in the works her book endorses.

It seems quite likely that Alison could not actually provide many — if any — compelling examples of experimental fiction that avoids “human complexities” or ignores “core human matters.” But, putting aside how we determine what qualifies as a “core” concern or how we register a human complexity, is it in fact the case that fiction should be devoted first to the delineation of its “human” content, to the cultivation of “feeling”? Why would the exploration of the formal possibilities (in all their complexity) not be just as crucial to the integrity of fiction as evoking emotion in the reader — arguably more so, as it is the shaping of language into dynamic form that confers on fiction the status of art in the first place? If Jane Alison truly intends her book to be a primer on how to “keep making our novels novel,” as she puts it at the end of her epilogue, it would seem advisable not to at the same time imply that such novelty (which is nothing if not itself a significant “human” achievement) should still be secondary to its content, the content that reliably appeals to emotion and restricts itself to established “core” themes.

The kind of formal experiment Alison is eager to encourage is pretty much encapsulated in the book’s title. Meander, spiral, and explosion are forms of spatial movement, although Alison also discusses additional such forms: waves, “wavelets,” fractals. These are all forms that mirror forms of organization in the natural world. One could say that while Alison seeks alternatives to the kind of traditional arc that is described by Freytag in his famous “triangle,” her counter-forms nevertheless reinforce the conventional practice of realism by stressing form as itself a “mirror of nature.” This is not to say that all of the writers she examines in illustration of these could adequately be described as realists (although many of them could), but Alison finds even those works that might otherwise seem the farthest removed from traditional realism to be less daunting in their departures from convention than we might think. “Cloud Atlas got lots of attention for its postmodern, metafictional cleverness,” she writes, “each story being nested within the next makes the ‘reality’ of any dizzying. But I think this contrivance is the least interesting thing about it.” Further: “I insist that Cloud Atlas is not only clever, not only designed, but earnest and moving. Its playful elements add to its depth.”

Again, it seems peculiar in a book ostensibly defending (and trying to advance) adventurous formal arrangements in fiction to decry as “contrivances” devices that contribute to the effort to reconfigure form. Cloud Alas, it seems, would have been one of those books that settle for being clever, merely “designed,” if it didn’t transcend its cleverness to become “earnest and moving.” Being “playful” in its effects is acceptable if those efforts augment the work’s “depth,” which clearly Alison values most of all. Formal experiment is only useful for Alison if, as in Cloud Atlas, it can enhance the “earnest” qualities of a novel, and its use diminishes it if the playfulness is in effect “merely literary.” Whether David Mitchell would be content with the perception his novel is “earnest and moving” above all, or whether he might like his design, his “metafictional” ingenuity, to be appreciated as well (else why apply it in the first place?) seems to me a question whose answer seems obvious enough.

Meander, Spiral, Explode is not without value as a briskly written, compact overview of the various spatial strategies writers have successfully employed, and might continue to be fruitfully employed if writers had a more synoptic view of them, along with a few models of the way they can work. Many of the illustrative readings are enlightening about the works discussed: Roth’s Goodbye, Columbus as a “wave” (as well as the underlying redescription of a narrative arc itself as more usefully perceived as a wave); Raymond Carver’s “Where I’m Calling From” as a “wavelet” (“seemingly small undulations” of story); Mary Robison’s Why Did I Ever as an “explosion” (or “radial”). Others are less evocative, or the text in question might just as accurately have been placed in one of the other categories, or described in other terms entirely. Nicholson Baker’s The Mezzanine, for example, does not readily seem to fit Alison’s characterization of it as a “meander.” While it is certainly true that the novel “gives us elaborate dilatory detail” that constantly interrupts the minuscule “forward motion” it ultimately gains, it is finally hard to regard this as a “meander.” It seems more like a deliberate subversion of the very notion of “forward motion,” a playful (but also urgently serious) displacement of that expectation most readers bring to reading a novel. Alison proposes the intriguing interpretation that the form of The Mezzanine actually mirrors its content, whereby “we experience a slight rise of forward motion, then a flattening digression, another slight rise, then a flattening digression . . . in the shape of an escalator” (riding which, of course, is really the novel’s only “action”). But it seems to me that this novel wants to arrest all sense of “motion” (as much as is possible in a medium made of sequential words); if it has a spatial rather than a chronological form, the movement of The Mezzanine is not “forward” at all but outward, in an attempt to expand the few minutes of its narrative clock time and its protagonist’s place in it to a kind of sustained instant of experience.

Finally, however, it is probably not so important whether Alison precisely identifies each of the spatial forms, or that writers have the “correct” name for them. To the extent that her book convinces writers there are indeed credible alternatives to the reflexive preference for Freytag’s “arc,” alternatives that do not imply a fall into formlessness but challenge inculcated expectations without necessarily alienating readers, Alison will have served a worthy purpose. But the book never really destabilizes the notion of “story” itself as the ultimate object of the fiction writer’s craft. Meanders or spirals do not, at least in Alison’s analysis, abandon narrative in its very loosest sense — a prose description of “what happens” to one or more characters — or deflect attention away from the “content” the narrative embodies in any significant way. In fact, it is in Alison’s account precisely the writer’s “craft” to embody the content by the most efficacious means available. (Form suits content.) Thus, Meander, Spiral, Explode is finally not really a book about formal experimentation in fiction but at best an effort to encourage a freer approach to form that forestalls a complete acquiescence to stale routine.

That the book’s intended audience is primarily writers seems fairly unambiguous. Although the analyses provided could be of interest to some readers not themselves writers (especially readers of some of the more “difficult” writers, such as Sebald or Robbe-Grillet, readers who have found their work foreboding), the book would likely be most useful as a supplementary text in a creative writing workshop. Perhaps this also accounts for Alison’s at times somewhat breathless prose and frequent reliance on figurative phrasing rather than a more analytical critical language. One could wonder, though, whether this gives the book greater accessibility or underestimates most writers’ (and writing students’) tolerance of more critical rigor. A book that considers thoroughly the principles animating the impulse to “experiment” in fiction, and looks at all the formal strategies adventurous writers have attempted, would surely be a service to readers and writers alike. That book has yet to be written.