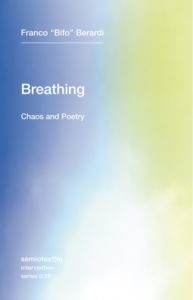 Breathing at once gives the ordinary its rhythm and signals irregularities in that cadence. Sometimes muted, slightly below the benchmark of sensation and perception, breathing structures the existence of bodies in time and space. Breathing makes itself seen and heard as we adjust to the atmospheres we inhabit. We respond to affective and climatological conditions, for instance, when cough, gasp, or sigh, when we’re breathless, short of breath, or out of breath, when we breathe heavily or loudly, when we have our breaths taken away. These acts vary the intensity of breathing. Breathlessness and interrupted breath are part of breathing. We’re always breathing — until we no longer are.

More than a generic term for a set of vital acts that may or may not rise to the status of event, breathing has become a periodizing concept. The proliferation of biological weapons in the twentieth century has made the respiratory system a target of state-sanctioned violence. Moreover, breath and breathlessness have become symbols and manifestations of the invalidation of Black lives in the U.S. “I can’t breathe,” the last words uttered by Eric Garner, an African American resident of Staten Island who in 2014 was put in a deathly chokehold, turned into a rallying cry when a grand jury refrained from indicting his assailant, Daniel Pantaleo. Garner and his daughter Erica, who three years after him would die of complications due to a heart attack, suffered from asthma, a respiratory affliction whose epidemiology reflects geographies of racial segregation. Meanwhile, tech gadgets and high-end services have turned breathing into a luxury commodity. In breathing, the ways individuals and groups differently experience the enmeshment of survival and depletion come into sharp focus.

It is no surprise, then, that the Italian critical theorist Franco “Bifo” Berardi, who for Semiotext(e) had previously written the Occupy-inspired The Uprising: On Poetry and Finance, zoomed in on breathing in his latest attempt to theorize contemporary life. Yet, his new pamphlet, Breathing: Chaos and Poetry, ultimately casts aside the uneven distribution of risk and vulnerability that breathing accentuates. Berardi instead universalizes the experience of breathing in the present. What results is, rather than a diagnosis of breathing in the twenty-first century, a symptom of the increasingly widespread conviction that breathing tells us something about the historical present — but what, exactly?

Berardi begins Breathing’s first chapter, titled “I Can’t Breathe,” on the scene of Garner’s murder. Berardi extrapolates from Garner’s statement — “I can’t breathe” — a general condition, separate from Garner’s identity as a Black man. “In many ways,” the author simplifies, “these words express the general sentiment of our times: physical and psychological breathlessness everywhere, in the megacities choked by pollution, in the precarious condition of the majority of exploited workers, in the pervading fear of violence, war, and aggression.” Berardi’s enumeration insinuates valuable insight: that breathing channels various manifestations of attrition. Still, the author’s leap from the particular to the universal muddles such insight. Berardi, who lives with asthma, goes so far as to claim “a sense of asthmatic solidarity” with Garner. This demonstration of empathy erases the distinct ways asthma affects Berardi, a steadily employed, white man who, unlike Garner, isn’t part of a population that has historically been a primary target of police violence.

Breathing extends an inquiry, started in The Uprising, into what Berardi calls “the relations between language, capital, and possibility.” While The Uprising posited that poetry had anticipated the trend toward abstraction that had led to the current form of finance capitalism, the new tome redefines poetry as “the premonition of a possible harmony inscribed in the present chaos.” Both books entrust poetry with the capacity to reactivate “the erotic body of the general intellect” and by the same means bring about collective liberation from finance capitalism. The Uprising anchored this reactivation in Occupy’s crowding of public spaces. Breathing, for its part, ties this process to a respiratory poetics. A poetics is respiratory, for Berardi, if it tunes into a “cosmic,” “temporal vibration that is coming and coming and coming.” In contrast to the poet Charles Olson’s well-known theory of projective verse, wherein verse is an extension of the poet’s own breath, Berardi categorizes poetry as respiratory if it captures a vibration that isn’t individuated.

But Breathing isn’t a book of literary criticism. It derives no evidence from the description or interpretation of poems. Poetry operates as a placeholder for the forces that, if we are to trust Berardi, could propel a flight from the experience of finance capitalism. The author alludes to the German Romantic Friedrich Hölderlin but doesn’t say a word about his body of poetic work. Berardi obtains from Hölderlin the notion that poetry taps into respiratory rhythm, “the inmost vibration of the cosmos.” Poetry, Berardi later adds, amounts to “the excess of language, the signifier disentangled from the signified.” When it comes to decrypting statements like the latter, any guess is valid. Poetry here seems to designate a system of signs and symbols whose interpretation requires an attunement to a rhythm that itself stems from some homeostasis between the act of breathing and a metaphysical capacity like the cosmos. It’s a grandiose assertion about poetry’s power — if it is in fact Berardi’s assertion — but it remains unsubstantiated

The closest Breathing ever comes to literary criticism is in a meditation on, of all things, Jonathan Franzen’s Purity. Berardi argues that the 2015 novel confirms Franzen’s legacy as a foremost narrator of “the decay of the American soul and the melting of the American brain.” What does all this melting have to do with breathing? “When breathing together grew dangerous,” Berardi offers, “everybody was obliged to breathe alone and the rhythm of individual respiration was obliged to follow the pace of economic competition.” Whereas in Berardi’s reaction to Garner’s death breathing generated a sphere of uniform, cross-racial experience, here it marks isolation under finance capitalism. Berardi’s many historical parables render confusing poetry’s sociopolitical role. It’s unclear whether Purity describes the conditions in which poetry must intervene or is poetry—in which case Berardi should at least explain why an especially sexist work of middlebrow fiction qualifies as a poetic exemplar.

Berardi’s main conceptual intervention as it pertains to chaos is an endorsement of Félix Guattari’s portmanteau “chaosmosis.” The term labels the harmonious interplay between individual subjectivity and universes of value in constant flux. Per Guattari’s nomenclature, the spasms that issue from an established order’s stiffening of vibrant bodies may also provoke remodulation or recalibration — the attunement of mind and body to the universes they inhabit. Berardi puts his faith in the notion that the shock of disorganization induced by capitalist alienation will produce the conditions of collective reorganization. Breathing’s place in this scheme is murky. If stiffening is asphyxiating, how can asphyxia accommodate new genres of breathing? Even more baffling, Berardi’s condemnation of capitalism’s psychosomatic impact regularly resembles a conservative rant against millennials and gen-z-ers:

The expression “snowflake generation” refers to the psychological fragility of those who grew up in the digital anthropo-sphere: in college, students are now more likely to report that they have mental problems, that they are seriously distressed by ideas that run counter to their worldviews and by events and news that question the expectations artificially created by the advertising environment. Their self-reliance is shrinking as they overuse mental health services.

Berardi’s ableist pathologization betrays his pick-and-choose relation to the Enlightenment, one that adopts as its normative ideal the model of the self-reliant, sovereign subject without dealing with its colonial and imperial underpinnings. What’s more, the celebration of self-reliance contradicts the book’s stated aim: the articulation of a project of collective liberation.

Errancies are frequent in Breathing: Chaos and Poetry. Berardi alternately addresses the “digital purity of connectivity,” the AIDS crisis, the “time of apocalypse” that has followed the 9/11 attacks, and the launch of Pokémon Go. There’s a great deal of chaos, very little breathing or poetry.

Jean-Thomas Tremblay is assistant professor of 20th- and 21st-century American fiction and film at New Mexico State University. Their writing has appeared in Criticism, Post45, Women & Performance, New Review of Film and Television Studies, Critical Inquiry, Los Angeles Review of Books, Public Books, Arcade, and Chicago Review. They are writing a book on the aesthetics and politics of breathing in contemporary screen, performance, and literary cultures.