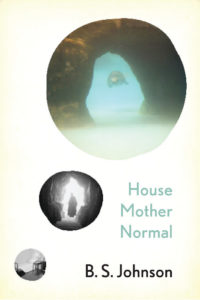 Paul Auster has more than once quoted the poet George Oppen on growing old: “What a strange thing to happen to a little boy.” The characters in B.S. Johnson’s fifth novel, House Mother Normal: A Geriatric Comedy, originally published in 1971 and republished in 2016 by New Directions, might agree with this. One character notes, “I wish I’d been kind to old people then, now I know how it is”; nonetheless, most of the characters are extremely hard on each other, constantly criticising and dismissing one another quite as though they alone have escaped the pitifulness of everyone else’s old age. Right from the first chapter, the voice and the choice of nouns situates us firmly in postwar Britain, with counterpanes on the beds, faggots for dinner and brilliantine in the hair. At the time of writing, this was already somewhat dated, but appropriate for the characters, many of whom live almost entirely in their memories.

Known for his experimental fiction and his unshakeable, stubborn and much-repeated belief that “telling stories is telling lies,” Johnson thought that the Dickensian novel — the “realist” novel — failed to represent reality in any meaningful way. For Johnson, only something that drastically altered the restrictive form of the novel could have any hope of staying faithful to reality. In The Unfortunates, a novel in a box, the constructed nature of novels and narratives is highlighted by the presentation of a stack of loose sheets, of which only the first and last are identified. The rest are to be read in any order. In Albert Angelo holes in the text allow the reader to see through to what comes later, thus from the beginning constantly undercutting the idea of suspense.

Johnson also often feels frustrated with his own attempts to convey reality. The ideas he wants to impress on us, the feelings he wants to evoke on us, will never behave just so: there is always a gap between what is in his head and what will come out on the page. This comes up in Albert Angelo when, after starting with a fairly traditional third-person section, and moving through a more personal, more real-seeming second-person section and then a congenial “we”, the narrator breaks down mid-sentence towards the end and says “oh, fuck all this lying.” You might say that Johnson is like any writer in that he’s constantly tinkering with how to produce exactly the intended effect, but all the work is done as part of the novel instead of the editing process.

Johnson’s rather belligerent ideas about fiction, with their implicit radical snobbery that he was the only one who could see things clearly, might suggest that his fiction is unreadable. But that is far from the case: if you’re not the sort of reader who can also find enjoyment in the traditional novel, you might not find Johnson’s work radical enough as he is, in spite of his protestations, rather good at creating a story and at opening up a character’s mind to a reader.

House Mother Normal, Johnson’s fifth novel, is set in an old people’s home. Each of nine characters has a twenty-one-page chapter, and each records the same events at the same time — to the extent that lines on pages can be matched up, and one character’s reaction can fill in another’s gap. It’s like a real-time recording of one social evening, seen again and again from different perspectives. It’s not so much about the concept of an unreliable narrator as it is about the impossibility of there existing a reliable one. The device allows Johnson to refer obliquely to something, to show each character’s different opinion, assessment or interpretation of a situation without the reader actually knowing what that situation is until much later (although since each incident is at the same point in each chapter, even to the same line on the page, it’s easy to cross-refer if you are so inclined).

In fact, this project is not so different in ambition to The Unfortunates in that both are aiming to disrupt the primacy of what is read first and thus shapes all subsequent understanding – The Unfortunates by refusing to provide the reader with a definitive timeline, and House Mother Normal by showing multiple reactions to an event before showing the event or the motivation behind it.

The House Mother introduces the novel. She tells us that the inhabitants are all NERs; that is, they have no effective relatives. We are, then, already a little suspicious, when she says that during this social evening we will join “our friends dining, first, and later singing, working, playing, travelling, competing, discussing and finally being entertained.”

Each chapter, which has the same page-numbering as all the others, that is pages 1–21, begins with a quick assessment of the resident’s physical and mental faculties as well as their “classic questions” score — their ability to answer such questions as “How old are you?” and “What year is it?” The final chapter is taken over once again by the House Mother, whose chapter follows the real-time conceit but then steps out of the frame at the end. Most of the narrative is internal monologue, with only a few — except in the case of the House Mother — words spoken out loud.

As each chapter replays the evening’s activities, we see that the residents are in many ways hostages of the House Mother. The dinner is revolting slop, the singing is a school-hymn type of song that begins “The joys of life continue strong / Throughout old age, however long;” and ends “The most important thing to do is stay alive and see it through.” Only the most lucid of the residents get the words right; at the end we discover that the House Mother has her own bawdy lyrics. Working involves labouring for one or other of the House Mother’s shady side-projects: tampering with drugs or making Christmas crackers. Playing turns out to be the children’s party game pass the parcel, at the end of which the prize turns out to be a turd from the House Mother’s dog, Ralphie. Travelling means exercising — walking aimlessly around the room, or being pushed around for those in wheelchairs. Masochism comes to the fore again in competing, during which two wheelchair-bound residents armed with mops are pushed by some of the stronger ones in some kind of jousting tournament. The deliberately provocative discussion, which most of the residents tune out, is about what the residents want to be done with their bodies after they die. During the entertainment finale the House Mother tries to goad the residents with her outrageous behaviour, but they remain resolutely (and satisfyingly) bored and unshocked. Throughout the novel, the House Mother makes liberal use of the twitcher (a kind of whip or cane).

The narratives start with the most lucid residents and move through those with mild confusion all the way to Rosetta Stanton, whose twenty-one pages are largely blank, with random Welsh words and near words appearing at irregular intervals, interrupted by the startling and chilling “N o w I   c a n       e v e r y w o r d y o u s a y     I am a prisoner in myself. It is terrible. The movement agonises me. Let me out, or I shall die” shortly before it descends into five pages of silence. Gloria Ridge is in the exact middle of the residents; her monologue is fascinating for the constant confused reworking of her memories — almost-repetitions, sentences derailed by a homophone that sends Gloria off on an unrelated tangent. This section feels like some kind of absurd word-association song.

“A Geriatric Comedy” is an interesting choice for the subtitle. Because of the order the narrative perspectives are presented to us, we don’t find the events funny although they might, from a different viewpoint, easily be comic. The events themselves could be turned into farce or slapstick, but aren’t. Indeed, although Johnson can write a very funny sentence, in this work he returns to an often-considered theme of characters feeling trapped and at the mercy of other people’s masochistic tendencies.

This polyphonic novel is a successful piece of experimental writing (another term Johnson disliked), both because of and despite its explorations in form. Some readers have claimed that only the more traditional aspects of the novel — the poignant, readable memories of the more cogent residents do indeed showcase Johnson’s talents (and for him this was probably always a double-edged sword) as a storyteller, while the framing of the same social evening from multiple perspectives, mostly internal thought, adds up to a much greater result than a single omniscient perspective alone could hope to achieve. Possibly the closest a novel will ever come to ability to cram everything in, to report in real time, what is actually going on rather than what actually makes a satisfying narrative arc. And yet that is there too. I am constantly conflicted with Johnson. Is he a successful experimental author because of or in spite of his formidable ability to spin a yarn, because of or in spite of his bad-tempered insistence on fealty to the truth, because of or in spite of his conviction that he was the only one doing it right? I may never decide. Or perhaps the truth is that the two are equally important to Johnson’s work. As Zadie Smith once said, “We cannot be all the writers all the time. We can only be who we are . . . Writers do not write what they want, they write what they can.” For Johnson, writing what he could was never good enough.