Manifesto for a Left-Wing Meme

Across two years of late capitalist implosion, ironic socialist meme pages have proliferated on Facebook. From the big hitters like Sassy Socialist Memes to up-and-comers like De-Classcucking Memes for Commie Proles and Dank and Rare Memes, Also Communism, there are now dozens of pages peddling broadly similar fare.

Shit-posters and anarcho-capitalists are met with a barrage of the aforementioned ‘go to Gulag’ image macros. Counter-memes, and flustered commenters who took a wrong turn down a Hoxhaist alley on their way to Hillary Clinton’s Pantsuit Nation, react with horror to these light-hearted invocations of the Soviet work camps.

But, the most unreformed Tankie and the lily-livered social democrat would surely concur: the admins of Comrade Lenin’s Dank Meme Stash are unlikely to seize the means of production any time soon. In Walter Benjamin’s phrase, the danger latent in these memes is “more to do with flatulence than with subversion.” They do not hasten violent revolution: they dissipate the energy which would make it possible.

The gulag gags mask what Benjamin called Left Melancholy, “the metamorphosis of the political struggle from a drive to make a political commitment into an object of contemplative pleasure.” In the face of a right-wing hegemony encompassing economic base and cultural superstructure alike, the failed left retreats to paw over “the traces of former spiritual goods”.

Benjamin first formulated the criticism against the “radical left” journalist and poet Erich Kästner. His world-weary criticism of the petit-bourgeoisie was (Benjamin felt) typified by alienation from working class struggle, by a retreat into masturbatory self-pity and “know-all irony” that was itself inherently petit-bourgeois.

Consider this recent upload by Sassy Socialist Memes, the largest and most mainstream of the left-melancholic meme pages. Trump’s election lent credence to radical-left critiques of elective, representative democratic process in the eyes of all but the most radical neolibs. There is political capital to be reaped here. But rather than counterpoint millennial clicktivism with images of contemporary revolutionary struggle in Rojava or Chiapas, the meme opts for a detail from Vladimir Serov’s oil painting of the Storming of the Winter Palace in 1917. 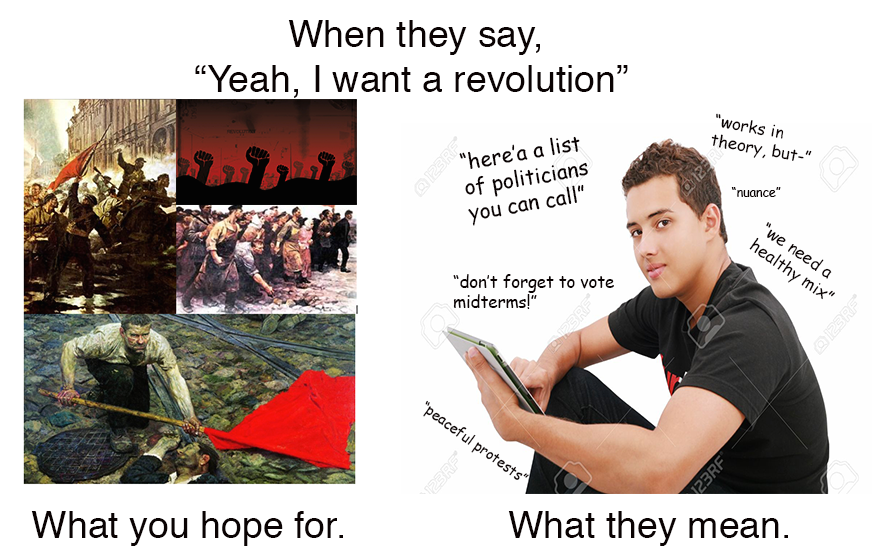 On the left-melancholic pages as in Kästner’s clique, the “real people” are left behind in favour of fellow “random leftists”. In Benjamin’s terms they “turn the yawning emptiness into a celebration”, taking as their “dusty heart-shaped velvet trays” the blank Siberian wastes and the fallen satellite states of the Soviet bloc.

I’ve snickered at these memes before, even enjoying a certain thrill of inclusion in the ranks of the radical left as I read Josef Stalin was a good Christian who did nothing wrong. But any such thrill is necessarily exclusionary, inherently counter-revolutionary, and a dereliction of our materialist duty to engage with the realities of the past. Irony is not a sufficient excuse for ignoring the gulag, or the Great Purge, or Stalin’s slaughter of workers on the altar of the Cult of Personality.

In her influential 1999 essay “Resisting Left Melancholy,” Wendy Brown distilled Benjamin’s gnomic formulations into a rallying cry for a faltering left. She argues many on the radical left take post-modernist thought and identity politics as Freudian “substitutive objects”, vilified in order that leftists can maintain a “narcissistic identification” with political orthodoxies that have “wilted on the vine.”

Displaced, misplaced resentment of feminism and ‘Tumblr-style’ LGBTQ* politics is a particular hallmark of these pages. As in the profile picture of Sexy Stalinist memes for Sexy Stalinist teens, meme creators lexically align themselves with the alt-right through the mocking use of words like “triggered” or “snowflake”. Rather than being incorporated at a fundamental level into a materialist analysis of society, Black Lives Matter and the struggle for trans rights are lumped in with Clinton-style liberalism, in explicit opposition to the left-melancholic pages.

In fact, left-melancholic memes are the product of a culture which has atrophied still further than Brown suggests. Brown describes a “self-loathing” left, “more attached to its impossibility than to its potential fruitfulness”. The left as self-created through the melancholic meme is not only abstracted from the present: even the lost past it clings to is held at a distance.

What goes unspoken in the jokey references to ice-picks and Holodomor denialism is nothing less than the totality of Soviet communism: the vaulting life expectancy, the race to total literacy, the world’s first legal abortions. The left cannot bear this loss, and sublimates its recollection into an ironic fetishisation of the bloodstained bureaucratic apparatus which accompanied it.

If you do believe the USSR has been maltreated by liberal historians — and there is a reasonable case to be made here — such an attitude does nothing to redress this imbalance. Simply refusing to acknowledge the very real millions who suffered and died under Stalin, rather than admitting the USSR’s failures and asking what can be done to ensure any future socialist project avoids the same ills, betrays a rejection of “potential fruitfulness” in favour of substitutive wound-licking. Focusing on those aspects of past communisms which make them most unpalatable to the liberal mindset, the left-melancholic meme pages push the better part of communism away — and with it the possibility of socialist revival. 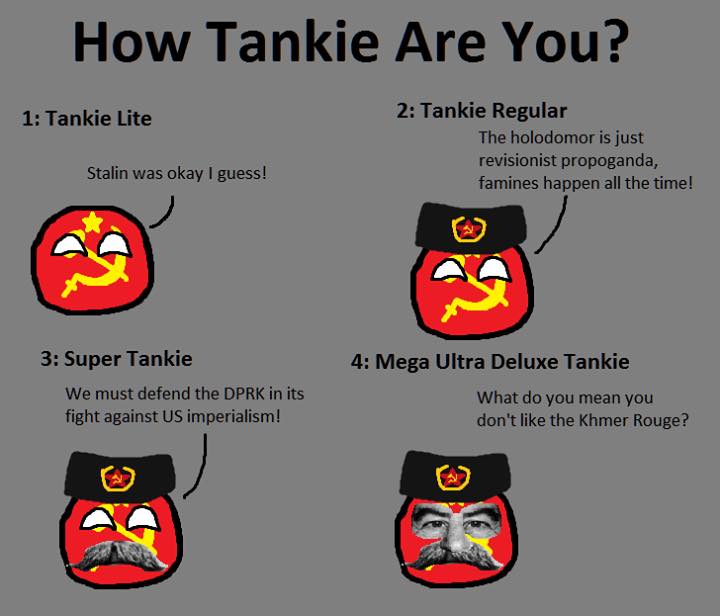 Some memes posted by these pages do correlate communist theory and past victories to the contemporary political moment, itemising the failures of capitalism or recalling the USSR’s defeat of fascism. (These anti-Nazi memes are enjoying a particular zeitgeist in the current political climate, and however militaristic and nationalistic, they represent the stirrings of a crude appeal to left populism, rather than mere narcissism.)

But the overriding melancholic aesthetic subsumes these memes, haunting any attempt to rejuvenate the communist project and confining it to comfortable seclusion among the DPRK flags. Like Benjamin’s bête noire, the brocialist meme-maker is “as incapable of striking the dispossessed with his rebellious accents as he is of touching the industrialists with his irony.”

The meme in the age of mechanical reproduction

Of course, these memes are the avatar of Pepe the Frog and not the ‘fake news’ memes about Hillary Clinton’s health and the like so widely circulated during the presidential US election. They are made for a coterie audience, for the private enjoyment of the left. Some offer genuinely thought-provoking analysis, and meaningful ideological debate can sometimes be found in the comments.

But with the worst full of passionate intensity, this is not enough. Tiresome alt-right guru Paul Joseph Watson recently crowed on Twitter: “conservatism is the new counterculture: we are seizing the memes of production”. The pun is drab: the elision of base and super-structure it contains is not. The left may have its Pepes, but it currently offers no memes capable of influencing the masses. Following Benjamin’s “formulation of revolutionary demands in the politics of art”, the radical left must demand better memes.

Much has been written refiguring Benjamin’s work for the digital age. In his update of The Work of Art in the Age of Mechanical Reproduction, Douglas Davies argues the ‘aura’ of artworks — which Benjamin sees as subsumed by automated reproduction in favour of immediacy to the consumer — has now wholly been transferred to the copy, with original and replica “entwined in ecstasy”. But the melancholic-left memes reject this ecstatic potential.

In its original iteration, the meme was the first art-form specifically and exclusively defined by its own reproduction. As all of us apart from Richard Dawkins understood the word in about 2010, it meant an image macro encapsulating a shared experience or concept which was then shared across the internet. (Thus giving rise to massively-popular memes like Unpopular Opinion Puffin, a superlative embodiment of mankind’s capacity for self-deception). Defined as “an image… copied and spread rapidly by Internet users,” if it only appeared once the original meme could not be termed a meme at all.

The shift away from this style into a one-off format is by no means confined to the left-wing meme pages, but it takes on a particular intensity and significance here. A big running joke is hyper-specifity, overloading images with text and over-writing mainstream memes. The visual effect is often wilfully off-putting, sometimes overwhelming. In one currently-popular format, a grinning clip-art spheroid is accompanied with the text “when ur”, followed by an exhaustive account of internal conflict among left factions or critical theorists. 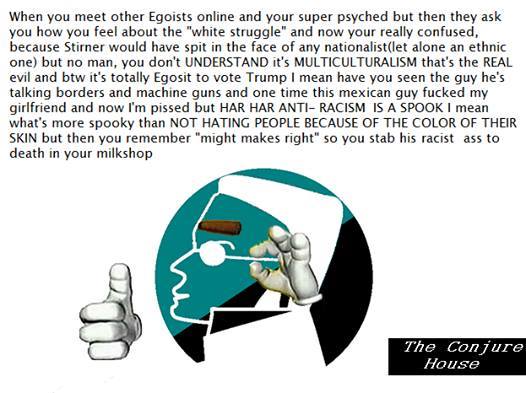 It would be charitable to believe meme-makers are pursuing a Dadaist programme, engaging in the “relentless destruction of the aura of their creations” (Benjamin) to clear the way for a radical cultural evolution we cannot yet conceive of. What is certain is that left-melancholic memes refuse reproduction in all but the most specific circumstances, granted an “aura” not by mechanical irreproducibility but by hyper-specific political factionalism.

Toward a truly left-wing meme

At the close of Reproduction, Benjamin says fascism treats politics as a matter of aesthetics. That is precisely the trap the left-melancholic meme pages fall into, indulging in a purely aesthetic nostalgia for Realist imagery, military hardware and roaring crowds waving the Red Flag. Any political engagement with Soviet realities, ugly or otherwise, seems an afterthought. The admins of these pages would do well to consider Benjamin’s subsequent challenge: socialists, he argues, must respond to fascism’s exuberant aestheticisation of its own project by politicising art. What would a new left meme, following this exhortation, look like?

Importantly, it must be related to contemporary political struggle. At least one administrator of the meme page Red London is currently fighting with the YPG in Rojava, where the “fight against Isis” can be used to introduce a mass audience to concepts of anarchism, socialism and democratic confederalism. The AK-47s and red flags here are anything but backwards-looking.

Fascist-baiting provides another model: it’s been scientifically proven that the viral video of neo-Nazi Richard Spencer being twatted in the head radicalised everyone who saw it by 20% or so. But it was the subsequent, humiliating barrage of memes which really damaged his political project, puncturing and deflating the high seriousness of his brand of white nationalism.

Finally, graffiti artist Banksy is easy to mock as an entry-level ‘woke’ poseur whose pieces appear profound but lack materialist rigour. But his work is the closest left avatar to shitty Britain First memes juxtaposing refugees with homeless servicemen, which pick up shares from your aunt and two million other aunts across the nation. The critical challenge for the makers of the new left memes, as for any left movement which seeks populist appeal, is to harness anti-elitist, anti-globalist sentiment and divert it towards capitalist hegemony.

Though he dismissed it as mere rhetorical device, irony often functions as a Freudian defence mechanism. On the melancholic meme pages, it enables the ego of the weakening left to displace its self-loathing onto its past incarnations in a playful fashion, rather than consider its contemporary failures. But now is the time for attack, not defence. An ironic revolution is no revolution at all.

Matt Broomfield is a journalist writing regularly for VICE, the Independent and others.

The Brief Life of Brutalism