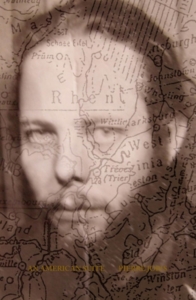 “What’s in a day?” is a question that circles below the surface of Pierre Joris’ An American Suite, which consists of poems written in the 1970s. These pieces — selected from “old sheaths of typescripts” — have never before appeared in book-form, and some have never been published at all. According to the book’s introduction, the poems that made the cut did so for “their newness.” And these poems do feel new. Ignoring lines like “This is the age of the polaroid,” if I read a poem from this book without knowing its context, I would readily believe it was written today.

It was notable, then, when I noticed that almost every poem in An American Suite was dated down to the day. If Joris published these poems today for “their newness,” why historicize them so explicitly? Initially, the collection felt like it might be found in a museum exhibit about some legendary writer, displaying their annotated drafts, replica desks, letters, and other physical marginalia.

As I read more, though, it became clear that days, dates, holidays, and events are consistent grounding tools in this collection. The content of Joris’ poems revolve around the ‘day’: the book opens with a sequence titled “A Place Around Easter,” which resembles a non-chronological journal that hovers around Easter in 1973. Accordingly, the sequence’s first section is from April 17, 1973, the second piece hops back to March 26, and the last section goes deep into the night of April 18 — beginning at 8:15 pm, continuing at 10:20 pm, and concluding nicely with the piece:

There is also a poem framed around a classical performance on January 21, 1974, a poem titled “Sunday, 4 – Epiphany,” and a Frank O’Hara homage, “The Day Paul Blackburn Died.”

This diaristic fixation with the calendar is a formal constraint that allows Joris’ other formal preoccupation — what one might call the “linguistic riff” — to invigorate the page. These riffs are often at the smallest units of language, as in this moment from “3/IV/73 / 10.10 am”:

after the storm. sporadic

Joris presents the remnants of yesterday’s storm, complete with an injured butterfly, spores, and scattered bricks on the street. The passage’s logic, though, is similar to that of a freestyle, where “spores” follows “sporadic” as a natural sonic progression, where “sharks” follows “shards,” and where assonance drives “wind” to “driven” to “bricks.” Moreover, although there is tight sonic continuity within each stanza, Joris abandons each sonic pattern as he picks up a new one (contrast this style to Seamus Heaney’s “The Rainstick,” in which a particular set of sounds occur throughout the poem).

I also love the emphasis and repetition of “on” in the lines:

While I can see a butterfly in the air, I cannot see a butterfly on the air, but Joris insists! And the emphasis on ‘on’ carries over to the butterfly being ‘on’ his mind. This move, to me, is sheer delight: to say something is “on my mind” is so common as to be forgettable, but the enjambment after ‘on’ coupled with the impossible butterfly-on-air image injects strangeness back into the phrase. That is, if Joris looked up through his mind’s eye, would there be a butterfly sitting atop it?

These small riffs feel, as in freestyle, spontaneous. It feels like Joris writes and thinks at the same time, which, while not in itself novel, contrasts with Wordsworth’s canonical definition of poetry as “the spontaneous overflow of powerful feelings . . . recollected in tranquility.” Joris’ un-tranquil spontaneity is effective, because it is grounded in dates and diaristic entries; I follow the linguistic digressions and am happy without cohesiveness, because they read like a sequence of thoughts during a particular hour on a particular date.

An American Suite is at its best when both grounded and alive in its linguistic riffs. These riffs can be polyglottish and dense:

my hide is at stake

They can be contemplative and exact with the image:

up circles sun. Rook or

raven so high up I

on me. Sells me circling

the sun. Heavy on

the right side. Sin–

to the left, rook

And they can be drunkenly mimetic:

At the same time, the moments that lack either the grounded frame or the spontaneity are the least effective moments in An American Suite. The poem “The Day Paul Blackburn Died” and much of Part 2 of the eponymous “An American Suite” provide good examples. While “The Day” is grounded in both the day of Paul Blackburn’s death and in the style of O’Hara’s “The Day Lady Died,” it lacks the spontaneity of Joris’ other poems or even O’Hara’s original. The poem is wordier, its syntax is more conventional, and its line breaks don’t carry the same charge that his or O’Hara’s poems typically do.

Part 2 of “An American Suite,” by contrast, does carry much of the spontaneous charge that energizes the collection — its short lines and quick turns — but the imagery is more incantatory and abstract:

These passages are less effective and feel more dated than the rest of the collection, which generally reads fresh.

When at its best, the collection’s calendar frame is not just a gimmick to let Joris’ other formal moves run wild. It is meaningful, too, and the elephant in the book, “Metasemiologies,” proves revealing. This piece — structured more as a numbered set of philosophical claims — is a working-through of various structuralist and poststructuralist voices. It begins: “1. The object of semiology is the study of the life of signs at the heart of the social life.” And the ‘day’ is an important sign to Joris. A day is central to the “heart of social life”: it signifies and organizes a unit of time that humans have decided is important. A ‘date,’ furthermore, systemizes the ‘day’ into a unit of time that then fits within a conception of history. Today’s date, then, can be mapped on the same calendar as a date 4,000 years ago, or yesterday, or whenever.

Perhaps, then, Joris asks, “What’s on a day?” And, in doing so, he destabilizes our claims for both “dating” time and for poetry’s timelessness. In “Metasemiologies,” he concludes that, “Language… belongs to a description that is neither transcendental nor anthropological.” Time escapes calendar’s straightjacket; poetry escapes too, but cannot escape time. Still, An American Suite is a bold attempt to think of some “way out / of these calendric / interstices.”

The Moon Over Edgar – Ian Felice