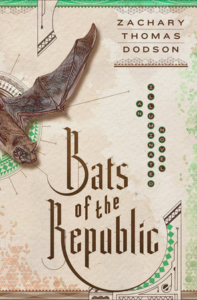 Set in America’s past and future, Zachary Thomas Dodson’s Bats of the Republic pieces together the convoluted, time-insecure stories of two young men and those that matter to them (whether or not they realize it). Bridging historical, western, and dystopian SF settings as it moves between storylines, this steampunk cyborg of a novel flits between genre expectations. As it moves among several modes of writing, from love letters to a 19th century novel to bureaucratic conversation transcriptions, its representation on the page shifts to suit the form. Dodson seems to ask: why have we left the pages of books so dry when we can do so much?

Bloodlines and paper trails pull the novel’s threads out from its core: Zachary Thomas himself, who implicitly places himself between Zadock Thomas of 1843 and Zeke Thomas of 2143 both in his naming and moustache flaunting. As all of these personas come together, they seem to encompass the many realities of an individual who feels lost and at home in many times simultaneously. Perhaps because they are so interwoven, the characters themselves do not stand out as particularly vivid or recognizable. If anything, Dodson emphasizes the fuzziness around their edges. Pointing to the way that any character or history is simply a compilation of the words we could find, Bats of the Republic questions how much we will really be made whole by that one missing piece of information. Moreover, it demonstrates how our obsession with one detail blinds us to innumerable others. As Dodson writes along with the copyright information, “Any resemblance to actual persons, living or dead, events, or locals is entirely coincidental. Any resemblance to other persons or locales within the book should be carefully noted.” Rather than revealing the personal depths of his characters, Dodson elaborates on the proliferating parallels between their lives. I might have loved this book more had I been more attached to its characters as individuals, but I was interested in it because I was not.

The mission to find/deliver a mysterious letter that drives the plot does not encourage the characters to develop in very nuanced ways, giving them a somewhat picaresque feel. Nor does the novel create as many moments of adventure novel style action as one might expect of a historical/sci-fi melding. The constant shifting among characters, narrative styles, and time periods makes it difficult for the characters or the plot to build up nuance and momentum. Instead, like a hipster in a vintage shop, the novel delights in the trappings of these periods.

These limited characterizations, however, are rescued by the enticing visuals of the book itself. Perhaps you shouldn’t choose a book by its cover, but you should definitely choose this book for its pages. One of the most engagingly illustrated and typeset books for adults I have ever encountered, Bats of the Republic deserves a long look. Illuminated with green type and detailing, this book is deeply aware of its textuality. The type sets the tone of the scene. For example, as a character travels through the bat caves, the pages invert to black background with white type. Another passage begins by musing on the disappearing art of writing by hand, penciled more or less between the regularly spaced green lines of notebook paper. The character’s idiosyncratic handwriting in a letter to a friend allows her personality to expand beyond the confinement of size 12 Times New Roman; letters can droop below the lines as thoughts trail into unknown spaces and doodles reminiscent of bat flight patterns foreshadow escapes to come. What would perhaps be too many different storytelling modes without this visual assistance becomes one of the most stimulating aspects of the novel. This graphic novel approach reminds us that we do not only read the words themselves, but also their context, style, and illustrations.

Bats doles out information in tiny morsels, leading readers along a path that is never fully lit and that is only haphazardly guided. A map of the “Republics of the National Alliance” that casually illustrates the loss of the entire Southeastern portion of North America (presumably due to sea level rise) follows dainty sketches of a sparrow. Never making clear what spurs the movement from one overlaid storyline to the other, the novel is fascinatingly overdetermined and under-explained. Occasionally, the story becomes so tangled in on itself that it lacks forward momentum. But, once its covers close, it calls from the shelf, enticing the reader to return with the unlikely hope that all will come clear the next time.

The passion and brilliance of this novel is not in its characters or its plot; it is in the form itself. Lovingly and perhaps obsessively compiled, Bats of the Republic revels in being a physical book. It displays the desperate importance of writing. Dodson’s characters write to escape restrictive societies that are themselves threaded into the perpetually revised storylines by which they know themselves. Through writing, we learn and share who we are. From its beautiful hardcover binding to its secret letter, Bats of the Republic is simply a gorgeous book. Hopefully, Dodson’s will soon be one of many illuminated texts that take advantage of modern publishing houses’ ability to bring the whirling creativity of a writer’s mind into an artful existence.