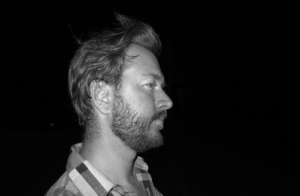 Chris Martin’s The Falling Down Dance is a book of poetry so tenderly, playfully, and, often, still, sorrowfully in tune with the modern world. Ranging from Frank Ocean to fatherhood, from modern love to modern sadness, Martin’s poems tilt and turn down the page, full of dance and momentum. Reading them, I felt a father, in a sense. I felt the delight and surprise of watching a child play with the ever-moving world. I felt an insistent hopefulness, a slight upward turn at the end of my lips, that kind of smile that comes when you see in sorrow, strangeness. And still, I’ve always thought that poetry is, at its core, a sort of playing-with-language, and Martin’s poems do that, toying with the acoustics of the space his poems inhabit, teasing out double-meaning. I would find myself whispering these poems while riding New York City’s subways, then speaking them aloud when I walked back above ground. The Falling Down Dance is a pulsing joy of a book. It feels so full, its slim lines bursting at the edges, trying to get out.

Devin Kelly: First of all, “the falling down dance,” is that an allusion to the Teletubbies? Regardless, even if not, I know children, and, more specifically, your own child, play such a large role in the book. There’s a playfulness there. But also a kind of mournfulness—as in the lines “We secretly fear / he likes the falling / down dance so much / he’ll never walk.” Can you talk about the role your child (and children, at large) plays in the book, and how that’s informed your poetry, as well?

Chris Martin: I stole the title of the book from a poem written by none other than my wife, Mary Austin Speaker. It surfaces in a poem from her book Ceremony, where she describes our first date. The way that phrase moved from the vertiginous falling of “falling in love” to the equal but different dizziness of “learning to walk” or “learning to parent” is deeply significant to me. Difference and repetition, the growth in traversing that gap. This book is largely about fatherhood and the way it transformed my understanding of time, the way a tiny human being shattered the monolith I’d assumed time to be into a protean multiplicity. And many of these poems were written in the dark of winter mornings before the sun rose.

On the other end of the playful, surprising sorrow-joy of children, the book also pulls of this sense of adult malaise without sounding too indulgent, if that makes sense. The fact that you can write lines that transcend self-pity, like, “But let’s be honest / it’s my birthday, awash / in the immense / and candied tedium of being / Dad. The New York Times / tells me August 11th is significant / for being the day least / likely for someone to type / depression / into a search window.” There’s something hilarious about that, perhaps signaling how far we’ve fallen collectively. How do you approach this sense of malaise, or discontent?

Taking care of a small life is such an insane paradox of tedium and lightning. There are endless stretches of desert where your life loses all its angles and goes soft, gummy, hallucinatorily flat. But there are also these punctuated moments of affective extremity, whether its brain joggling joy or mortal fear. The formless malaise is punctured by spikes of existential sublimity.

In the continued vein of malaise, or discontent—you end one poem with the declaration “Unperform.” I get the sense that this applies to a lot of what’s working through the book, not just a contemporary narrative of trying (“The year of trying / to be / at the very least / competent.”) but also to performance as it applies to gender, race—issues of the body politic. What do you mean by “unperform?”

I would rather know what others have to say/write/think about trying, about performing, about creating a space to unperform. The body politic, as you say, is learning how these issues play out in real life in real time. I’m co-editing (with Mary Austin Speaker and Sam Gould) a new publication called Society that was inaugurated to explore these issues. I look to writers like Farid Matuk and Rachel Levitsky and Ronaldo Wilson and CAConrad and Maggie Nelson and Tonya Foster and the list is endless.

CAConrad has a poem where he writes “it’s awful without you making sound exist,” which reminds me a great deal of your own work. Not just the tenderness of him addressing his subject, but the simple notion of sound. I’d like to ask about the potential for mining the sonic quality of children later, but, for now, quite generally: how do you approach sound in your own work?

Sound is everything. The ear is our most moral organ. The most vulnerable, the most committed to witnessing. Sound is how we say what can’t. It carries all that’s lost.

In the book, you write, “Tilting / the field one anticipates / into the verse / one doesn’t.” To me, this sounds like a gorgeous definition of one of the aims, perhaps, of poetry. And throughout the book, there’s a whole notion of “leaning” being teased out, hinted at. This might be an unfair question, but how do you define poetry? Or, perhaps more specifically, what is appealing to you about the tilting, leaning thing?

Well, I come to the tilting in that line through the etymological root of verse, which is a Latin word for turning at the end of a row, or for turning over the soil in a field, for turning and tilling. I want poetry to till and tilt. I want it to renew and restage difficult questions from unexpected perspectives.

I have a friend who wants babies to stay young forever. She says something happens at the age they stop being, as you describe, a “boombox.” And she’d probably agree with your lines, “I don’t want him to give up / song for word’s currency / but, you know, I need to speak / with him.” What happens to language, in your mind, as it evolves with age? As we grow into it, and become, maybe, too accustomed to it?

All babies are born with perfect pitch. I love that. It’s how they understand communication without understanding language. They register how pitch shifts indicate meaning. Then, in the process of acquiring language, the vast majority of humans lose perfect pitch, trading it for this wholly imperfect means of communication. Song always comes before language. As poets, we get to work backwards, shirking off the apparatus of transactional language in order to rediscover the soft singing flesh underneath. This also points toward my work with autistic writers, whose struggles with transactional language make them natural poets, fleshing out language with immense sensory gifts and real care for what words mean.

An immense amount, mostly in terms of how one might care for language on a deeper level. They don’t take anything for granted. And they have tremendous gifts when it comes to sensory perception, so abstraction doesn’t hold sway the way it often does with neurotypical writers. Finally, there is the natural exuberance of autistic writers, which helps me reconnect with my own creative spark. I believe, and research is beginning to bear this out, that poetry is the intrinsic tongue of many people on the spectrum. It’s their most direct form of linguistic expression. I also believe that poets are ideal educators and facilitators and collaborators within the autism community. There is a mutual benefit, a reciprocity that reminds me why poetry is important, necessary even.

On another note, your poems pulse with a kind of tenderness. Lines like: “The bracing that gives / way to embrace.” There’s an ache to them that feels. Sometimes I feel like we live in a world that pushes against feeling. And sometimes I feel like that feeling is a too generic and un-nuanced feeling to have. What is your take on the sentimental? How do you go about making your poems feel?

Again, we come back to the ethical potential of poetry. When the bottom line for poetry is bombastic displays of intelligence, it alienates and isolates. When poetry is embodied, when it chooses to feel as much as to think, or to understand feeling and thinking as enmeshed modes of being, poetry can portray the difficulty of living in a way that enlarges the human condition, or at least makes it less harrowing. Through deeply thought feeling, a poem can illuminate shared experience, moving from the difficulty of living to the difficulty of living with, as I write in a poem from the new book. You have to risk sentiment and you have to push deep enough to discover nuance. That’s the only way you can get to the with.

Pop culture teases in and out of your poetry, too. Drake makes an appearance. So does Frank / Ocean. And Bruce. And Girls. And countless others. I don’t know if I have a question about this. I think I just wanted to mention it. Sorry.

Many of my favorite poets are brilliant chroniclers of pop culture—Dana Ward, Jennifer Tamayo, Brandon Brown, Stephanie Gray—all the way back to Frank O’Hara.

You mention Jack Spicer’s After Lorca in one poem, and write, “Does he get bigger or does / the world shrink before him?” In one of the letters in Spicer’s book, he writes, “The perfect poem has an infinitely small vocabulary.” Is that something you take into consideration while writing? That a poem can be a sort of powder keg, the end result bigger than how it appears on the page?

Again, I’m strictly anti-perfection, so while I’ve always been intrigued by Spicer’s “infinitely small vocabulary,” and even written about it for Montevidayo, I identify more as a maximalist or a mistake-ist. Spicer is one of my favorite poets, but I’ll never write like him. I mean, I will dictate from the Martians and correspond with ghosts, but I’ll never write tight minimalist poems. I’m too enamored with the mess of the world, with collecting the torn cloth and sewing it into a costume for the world’s furious song to pass through. My Ars Poetica is Berrigan’s “Red Shift.”

I want to pull a line from that poem and relate it back to you, but that’s proving too hard. Maybe just—what about Berrigan’s poem informs you? What do you mine from it, if anything? And then, perhaps finally, what are you working on now?

Every line of that poem quakes with love of living and with love of others. I would have to quote them all. But better yet, everyone should hear this performance of it before they die. I point every day toward that politics of grace, affirmation, and refusal. I’m working on that. I’m working on some autobiographical prose. I’m working on furthering the connection between poets and the autism community. I’m working on a Halloween poem called “The Masks Are for our Own Safety.” It ends with a bunch of lines from Atticus:

He says It’s nighttime in other people’s houses

He says I breathe my dark air

He says I become a merry, scary shepherdess

He says My astronaut got some moon on him

He says Orca in a carriage full of people

He says I’m bellying away from you

He says I don’t want to call it anything

Devin Kelly earned his MFA from Sarah Lawrence College. He is a co-host of the Dead Rabbits Reading Series in Manhattan. His collaborative chapbook with Melissa Smyth, This Cup of Absence, is forthcoming from Anchor & Plume Press. His poetry, fiction, and essays have appeared or are forthcoming in Drunken Boat, Gigantic Sequins, Armchair/Shotgun, Post Road, The Millions, and more, and he his a Best of the Net and Pushcart Prize nominee. He works as a college advisor for high schoolers in Queens, teaches English at Bronx Community College, and lives in Harlem. You can find him on twitter @themoneyiowe.