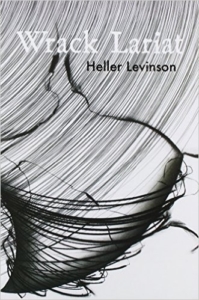 To read Wrack Lariat by Heller Levinson is not only to read a book of poetry, but also to engage in a linguistic exploration of the world through the lens of Hinge Theory. Of Levinson’s eight books of poetry, this is his third written according to Hinge Theory.

Hinge Theory is complex, but at its center, it is a linguistic concept to free language from traditional structures and expand words in new and exciting ways, and Levinson presents it as the next stage beyond Wittgenstein, Chomsky, or Derrida.

There are three basic components of a hinge: the pivot, the particle, and the postulate. To use a specific example, in Wrack Lariat, there is a module called “How much of.” In these Hinges, “How much of” acts as the pivot for each poem, there is usually one word as the particle, and a line or two as the postulate, which causes the whole piece to surge with contemplative meaning. To quote an example:

to embrace where you are

This provides an idea of a basic Hinge poem, but the form expands and different modules explore words in different ways.

Poet Leigh Herrick explained, “This is poetry acting as theory of language through language that posits a Theory of Everything, including poetry.” According to Michael Annis, Levinson’s longtime publisher, “Hinge Theory changes the core of thought processing . . . Its relentless extensionality — is a continuous erasure of boundaries.” Poet Paul Stubbs proclaimed, “Hinge Theory if it is successful will of course pervade into everything, science, biology, mathematics, philosophy . . .”

Are we still talking about poetry? Well, sometimes Annis calls them “Hinge applications” rather than poems.

Comparing the theory to the study of mimetics or cell reproduction, Annis wrote, “each word ‘breeds’ through definition, connotation, and pure aural vibration.” In Levinson’s words, “We have identified language as alive, generative, reproductive.”While the theory behind it may sound complicated, much of Wrack Lariat is actually very accessible. The book is divided into ten sections, each presented as a different module that explores an invented poetic form, and Levinson provides a few words of guidance at the start of each before diving into the poems. For “How much of,” Levinson writes, “I considered how much of ‘how much of’s’ appeal was due to its traditional usage as a quantitative query, now reoriented to released metaphysical posits. / In this Hinge Capacity, ‘how much of’ moves toward consideration rather than conclusion.” With the poet helping you navigate each section, you feel like you could try to write a few of these on your own, which seems in line with the ever expanding applications of Hinge Theory. Other sections include “Gerundial Geist,” which “is a module whose particle is initialized by a gerund,” and “Corner of ____ & ____,” which is a Hinge created by poet Amy J. Huffman, and the first time he’s written according to a module created by someone else, something that “underscores the Fertile Inter-Coursing that is an Essential Hinge Impulse.”

The latter half of the book shifts focus to visual art, starting with the eponymous section “Wrack Lariat.” The term appears to be Levinson’s version of Nietzsche’s Übermensch, encapsulating the struggle of the best artists.

Levinson’s quest for Van Gogh spans several poems across fifty-five pages. While the speaker here is autobiographical, I wonder if Van Gogh himself is evoked in a few poems. At the beginning, Van Gogh keeps showing up, but the speaker rejects him, “I placed a huge X through his skull, get out’a here, I’ve got no use for you.” Nevertheless, the speaker ends up flying to the Netherlands in search of Van Gogh. At times, we see Van Gogh imagined into the modern world: “Would his tubes of oil paint clear security?” The poet engages in a loud cell phone conversation with Van Gogh during a bus ride, “Boy, you really threw them for a loop with that crow picture.” Ultimately, the poet is able to engage with Van Gogh’s work, exploring themes of being, love, and the quest for home. The section is presented like a narrative, with whole pages being written in prose, yet we see the poetry seamlessly weaved in, expanding the section beyond a simple narrative.

At times, the poems are decidedly anti-technology: “walking the NYC streets, — people looking Down, immersed in their ‘screens,’ De-Evolving from becoming Erect.” Even so, there are certain technological/information age aspects at play in the background of the poetry. The section titled “Accidentals” includes the explanation, “They are restlessnesses wishing to stir from ‘My Documents.’” A poem called “beveling the séance daughters” includes the footnote, “All quoted matter taken from the Scottrade ads on Yahoo News.” Despite the poet’s feelings on technology, there is a clear connection between the endless web of hypertext and the expanding connections of Hinge poetry.

The book release for Wrack Lariat was held at Poets House in New York City. Of particular interest among the poetry that Levinson read was “flute carved from the wing bone of a red-crowned crane” because he chose to explicate the poem as he read it. The poem’s footnote describes ancient flutes from 7,000 BCE discovered in China. The poem includes lines like, “inheriting wing . . . swirling through swaths of cumulous gong.” Levinson explained, “In concordance with Hinge Theory, nothing is isolated, everything is part and participates in a greater whole. You might think of a great cosmic smooch if you want to . . . So where is that bone on the wing of the bird participating what is now a flute? And of course, the wing enables flight, and notes — musical notes — fly through the air and vibrate, so it all becomes this beautiful kind of spiraling plasma.” One line in the poem reads, “flute: built to fly like the crane.” Levinson expounded, “That’s the bone of the dead bird, of the bird that is not dead but is no longer what it was, is now spirited into this vast migration.”

Levinson was fretting about which poems to read from the 330-page book, his personal copy feathered with pink Post-it notes. “Just read your favorite poems,” an audience member suggested. Levinson replied, “They’re all my favorite.”
Joseph Patrick Pascale’s fiction has been published in Birkensnake, Literary Orphans, and 365 Tomorrows, among other journals and anthologies. His website is josephpatrickpascale.com.