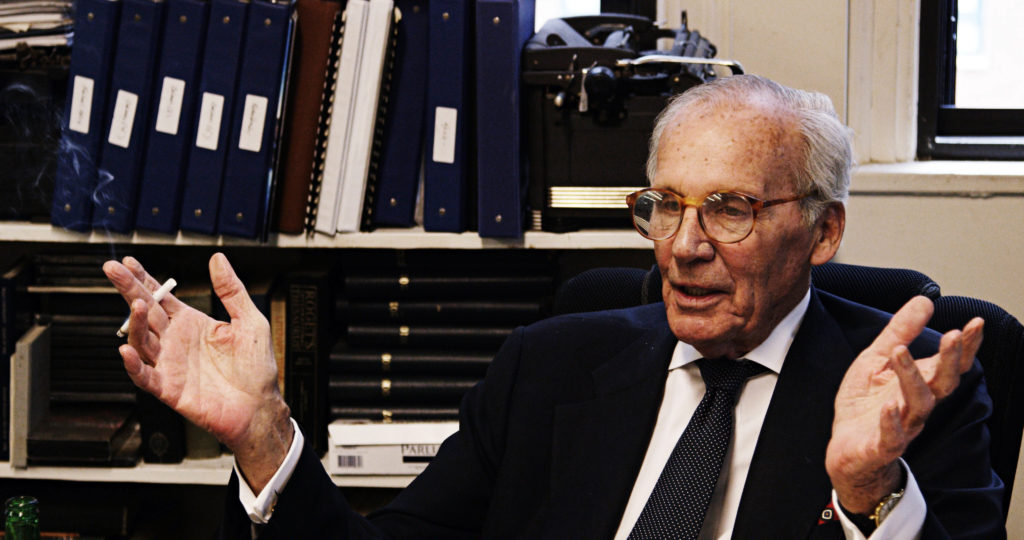 The following is an excerpt from an interview with Lewis H. Lapham that appears in the first issue of The Scofield, which is available for free download at thescofield.com. The editor-in-chief of The Scofield is longtime Full Stop contributor Tyler Malone.

It’s a late May afternoon in New York City and Lewis Lapham is drinking a Heineken in the eighth floor office of his eponymous literary magazine, Lapham’s Quarterly. He has forgotten we’d scheduled time to talk. When he sees me through the glass wall of his office, he reaches for his head, screaming, “Oh shit!”

Lewis, as he prefers to be known, is a consummate man of letters. While organizing his oeuvre of essays this winter, I invited a friend to have drinks with us. She asked, “How many essays have you written? Upwards of 50?” Lewis replied, good-naturedly, “Over 600.”

Some years ago I was living in a remote mountain town in the Rockies where I intended to write. I spent my days in the well-stocked (and, in comparison to my apartment, well-heated) public library, and my nights canvassing for employment at the local watering holes. I happened to read an essay by Lewis and reached out to seek a position in New York at the Quarterly. I flew in for an interview and returned a day or two later to uproot from the West until, I told myself, my first divorce.

And so I have known Lewis for a handful of years. I’d stay late in the office in the hopes that he might pity me and invite me for a drink at one of his haunts in Gramercy. I wished to learn as much as I could from him — all about his decades at the helm of Harper’s Magazine and his eventual decision to launch Lapham’s Quarterly in 2007 — but mostly I wanted to know how to write, who to read. Although Lewis momentarily forgot about our interview this spring, he quickly cleared his schedule, lit a cigarette, and generously offered his roving thoughts and provocations in a conversation that recalled the dozens we’ve shared over the past few years.

Andrew Mitchell Davenport: You once left the city to write a novel — your only novel, unpublished. What was that experience like?

Lewis H. Lapham: I’m trying to remember how old I was. I think I was about thirty. And I grew up, I came of age, I graduated college in 1956, then went to work as a newspaper reporter in California, then in New York, then as a magazine writer. But in that day and age the only writing that was considered serious was the novel. To be a literary figure, to be a literary artist, to have literary pretensions of any kind, one had to write a novel. There was no honor forthcoming for writing nonfiction. That was the thing in 50s and 60s New York. Of course, Tom Wolfe had the same problem. He was a very good journalist, but it didn’t count for him — he had to write a novel. He happens to write bad novels, but nevertheless, so did I. So I know the feeling.

It must have been about 1967, 1968. I was writing for the Saturday Evening Post, and I had a contract to produce eight articles a year. It was the dream assignment. I could travel all over the world. I was sent to India to cover the Beatles, I was sent on a treasure hunt in the Caribbean, I was sent to a sensational murder trial in Miami. It was an education. I also did a tour of America’s military installations and got to know quite a few generals during the Vietnam War. But I had this idea that I’m nobody without the novel. A mere hack.

So I took a leave of absence from the Saturday Evening Post and rented a house in Wainscott, which is between Bridgehampton and East Hampton. The house was on a pond. Idyllic. The pond wasn’t quite Walden, but it was a very peaceful pond. I had a fireplace in the winter, small animals in the trees, walks on the beach. I had all the props that would be necessary to bring out my inner novelist. But that person didn’t show up.

I did write a great deal. I spent in total about two years trying to write the novel. I put it through six drafts. After the first two months in Long Island, I looked at my phone bill. I saw it was way out of line. More than the rent. I understood what I was doing was trying to write three hours in the morning and spending a good part of the day talking on the phone to people in New York. At that point in time, I had a good apartment in New York and Elaine’s — a bar that a lot of journalists and literary types went to in the 60s — you could always find conversation after 11 at night. You were sure to find someone to exchange stories with. I found that I missed that. I was unable to go off and write a novel in the grand manner of somebody like Mailer, who could go off to Nantucket, or Updike, who could go to his cottage, or Flaubert at his mother’s. I didn’t have the inner fortitude or talent or enough to stay. 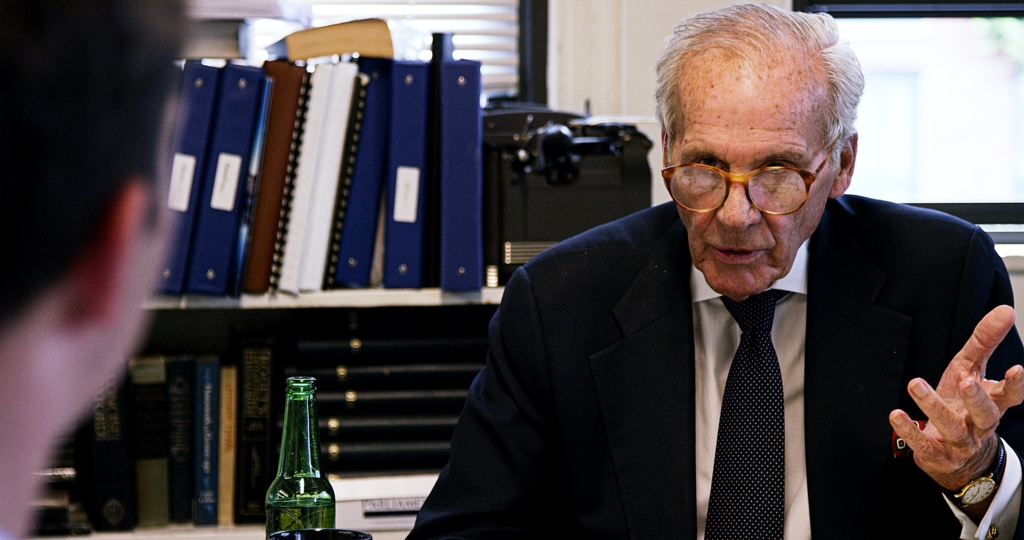 Was it just about being alone?

Part of it was about being alone. But I’m accustomed to being alone. Ever since I was a young boy growing up in San Francisco I would spend a lot of time reading. That was the way I would fill my solitude. I wouldn’t simply stare at the sky or a bird or a beach. I would go into a book. I could be very content with that.

On the other hand, I also like to talk with people, to be part of the conversation and in and around an exchange of ideas. This is one of the reasons why I like to have a drink at 6:00 at the end of the day with whatever editors happen to be around. That’s when I usually get my best ideas. Not only what I want to put in the magazine, but also what kind of essay I’m going to write. I draw heavily on that kind of conversation. That’s one of the joys of this particular job. Again, as you know, we’ve been very fortunate in the kind of young people that have been attracted to us as editors or interns. I learn from them. But I also learn from books. I also learn from writing. Because to write, as you know, is a fairly solitary occupation.

But your phone is ringing. And people are walking into your office.

But it doesn’t ring that much. It really doesn’t. I can leave it alone if it rings. I’ve learned to communicate with email. The haiku. But as Markson knew, when you’re writing, you are alone with your thoughts — alone with a pencil and paper — and that is a state of mind that I find very exciting.

Markson’s Reader’s Block has as its epigraph the Borges line, “First and foremost, I think of myself as a reader.”

I would think that I am the same way. I am certainly a reader. There was a period of time, even when I got to be older, that on my passport where it lists occupation, I was putting student. I was doing that into my thirties.

It was an education.

It still is. The tree of knowledge and the fountain of youth are one and the same. I wrote a piece about that in the New York Times last fall, about people that continue to do good work in the arts well into their eighties and nineties. Why is that so? My answer is that when you know you’re going to be hanged in the morning, it tends to concentrate your mind. By the time you get to be eighty, you know you’re not long for this world, right? That tends to focus your attention on what truly gives you pleasure. What gives me pleasure is learning. And I’m sure that’s what gave Markson pleasure. Because what he comes up with in his books, the anecdotes that he tells, the facts that he has on hand, or the direct quotations from an enormous range of other writers — this is a man who clearly read a good deal. I can see why he considered himself “Reader.” And so do I. And so, I think, did Montaigne.

If you read Montaigne’s essays, he’s constantly drawing on Cicero, or Caesar, or Thucydides. He has a very broad acquaintance with the classical writers. And he’s learning from them. He’s taking something that they say or they’ve seen or have thought and then wondering to himself whether that concurs with what he sees and thinks. His question there, at the beginning of the book, is “What do I know?” That’s the epigraph at the beginning of his essays. And his essay, of course, is an attempt to know and to learn, what do I really know?

I know what other people have told me. I think I know what I have seen. But again, having known, having seen, from a certain angle — which may or may not be “correct” — no matter what it is it’s distorted. There’s an old story about blind people feeling an elephant. Everyone comes up with a different idea for what the animal is. But, yes, I would say “Reader.” Or “Student.” Francis Bacon says that the only way you learn how to think is to try and put it down into words. I don’t know what I think until I try to write it down. That’s why being solitary and alone with a pen or pencil and paper is essentially learning how to be. And my guess — I wish I had known Markson (I only discovered those books about five years ago when they were shown to me by Elias Altman, then a young intern) — that he was the same. 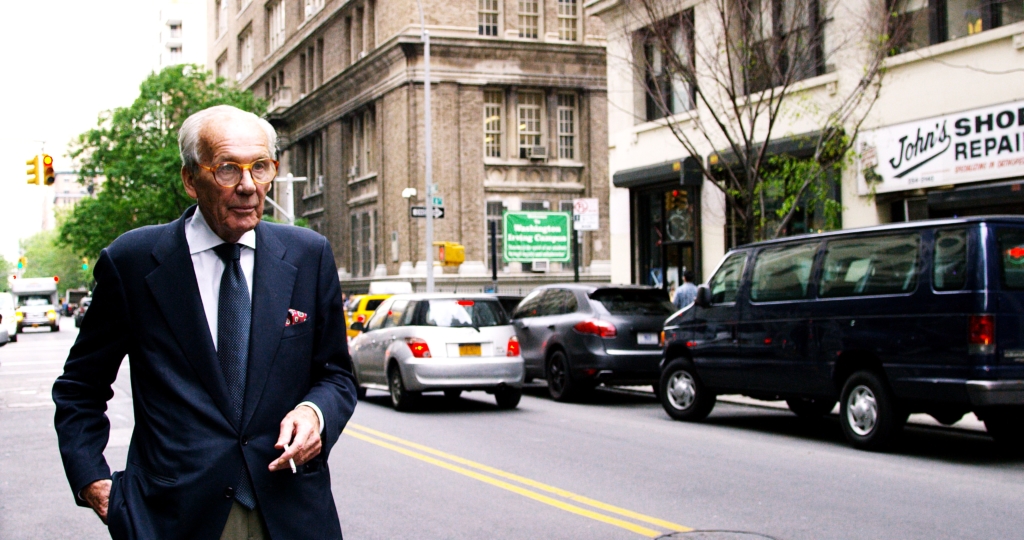 I first came across Markson by reading your copies. I read all of your notes and marks in his novels. I was reading you reading Markson. They used to be in these shelves right here.

I have them around. But then I give them away. They are books I give to people. Certain kinds of people.
To read the rest of the interview, please download The Scofield’s first issue for free here.

Andrew Mitchell Davenport is an educator and writer in New England. He is the Interviews Coeditor for Full Stop and a Senior Editor at The Scofield.