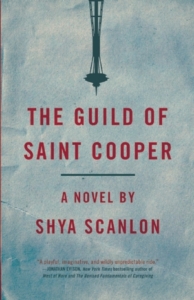 Shya Scanlon’s The Guild of Saint Cooper starts as climate fiction, set in a near-abandoned Seattle that awaits an imminent flood caused by the breakdown of the Ross Ice Shelf. Blake, the novel’s narrator, has moved back into his mother’s Ballard home to care for her following her cancer diagnosis, even as all their neighbors begin to pack up and move away in the face of oncoming environmental destruction. The head of the Guild of Saint Cooper (a large, perpetually grinning man named Russell Jonskin) quickly recruits Blake to write a hagiography of Special Agent Dale Cooper (from David Lynch’s Twin Peaks) that would also function as an alternate history of Seattle. Blake is initially hesitant, resistant to the kind of fantasy presented by Russell, and instead wants to write a kind of embedded journalistic account of the Guild. Yet as soon as Blake agrees to Russell’s proposal, the novel rewinds into an alternate history of its own, wherein Blake rehashes these same encounters and choices, albeit in drastically altered contexts. This is made somewhat more confusing by the fact that the chapters are marked by the number of days without rain anywhere in the world since the day the novel begins, which count upwards even as the plot moves backwards and forwards through its strange chronologies.

As a narrator, Blake seems familiar: an educated, somewhat awkward and fairly insufferable young male writer who carries on an affair with a much younger woman while his estranged wife is out of town and his mother slowly dies from cancer. Blake’s mother’s decline permeates the novel, although her ‘on-screen’ decline largely consists of, well, a lot of self-medication with marijuana purchased from a member of Russell Jonskin’s group. This is not a criticism; rather, it’s a testament to Scanlon’s lyricism that Blake remains a sympathetic character for the duration of the novel, despite his generally exasperating personality and tendency to the pedantic. (Not to mention his writer’s block; not a character flaw in and of itself, but a ubiquitous enough trope in stories about writers to make its appearance less a source of dramatic tension than a source of mild annoyance.)

Last August, Shya Scanlon started an online writing series he dubbed “The Twin Peaks Project,” composed by multiple authors investigating and reflecting on the ongoing influence of David Lynch’s television show. According to Scanlon, the Twin Peaks Project began during his research for The Guild of Saint Cooper, when he described the book to people and found them frequently responding with their own stories about Twin Peaks and its characters. There are references to Twin Peaks scattered through the novel, from the obvious — the titular guild and the appearance of Dale Cooper — to the more obscure. At one point, after seeing a woman on a bus using an aphorism-generating phone app with a misspelt attribution, Blake calls up his agent’s brother to ask him if he knows of an ancient Greek king named “Anonimous” — “A king with one eye?” asks Mitch (in contrast with the “Jack with one eye,” the codename for the Canadian brothel in Twin Peaks). Although the novel is built around the search for or narrating of the eponymous Dale Cooper, The Guild of Saint Cooper feels less like Twin Peaks fanfiction than a novel written for an audience that will understand the joke. The Dale Coopers that appear in the novel feel less like faithful renditions of Kyle MacLachlan’s character than they do stand-ins for the figure he represents, a kind of shorthand characterization that allows the novel to reflect back on the absurdity of his occult detection and questionable attraction to and for young women.

As it develops, The Guild of Saint Cooper becomes less realistic and more fantastic. A younger version of Blake meets Dale Cooper in a casino in Niagara Falls, and then meets him again — but for the first time — while home from college and visiting his girlfriend (also named Blake, a strange but never-acknowledged coincidence). In the penultimate section, aliens invade Seattle through some sort of interdimensional gateway guarded by a cult led by Russell Jonskin — yes, that Russell Jonskin. In the final section, most of the citizens of Seattle have been indoctrinated into servitude by the alien “Lights,” and spend their time caring for the city’s now-monstrous rhododendrons that have, in fact, been growing throughout the novel.

Yet even as Blake finds himself increasingly surrounded by the trappings of science fiction, he clings to his initial view and refusal from the beginning of the novel to play a part in Russell’s scheme to restore the city through creating a new story about Seattle’s greatness in the form of Dale Cooper’s hagiography. Believing that since Blake is a writer of fiction, he’ll be sympathetic to Russell’s views, Russell repeatedly monologues to Blake his belief in the human need for stories. These stories make them capable of surviving devastation, he argues, but the current dominating story of climate change as an insurmountable obstacle is damaging that capability:

I’m bored of that story. I’m bored of being trapped by it. . . . It’s a means of control, is what it is. It’s how the conversation is controlled. You’re raised to respect the truth so you can be easily controlled, and soon enough you’re bound to this discourse you didn’t author, nor did you authorize, revolving around an arbitrary value with an inherited priority that leaves you helpless in the face of authoritarian rule.

“Truth is truth,” insists Blake, in the face of Russell’s speeches. By this point, his insistence is understandable, though confusing: in a world that seems increasingly science fictional, as his is, what is the point of fantasy, of fiction? Better to show the world as it is, to convince people, Blake believes. Russell, in contrast, wants to lead them to believe — in themselves at least, if not something larger. At the end, though, these aren’t the arguments of The Guild of Saint Cooper. Scanlon is continuing to look for something else, beyond both fact and fiction: something, as Dale Cooper would say, both wonderful and strange.