The End of Days – Jenny Erpenbeck 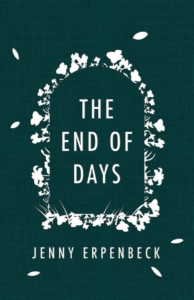 In celebrated German novelist Jenny Erpenbeck’s latest work, The End of Days, we see fate and chance conspire in equal measure to push lives along their unpredictable but inevitably entropic journeys towards oblivion. After his mother’s death, a young boy asks, “I’m basically sharing my entire life with my corpse? Is that how it is, Mama?”

It’s difficult for a living mind to parse the conundrum of not existing, of animation departing from flesh. In The End of Days, characters think through and around this idea, repeating little facts like the exact latitude and longitude at which a person dies, as if collecting concrete information related to this ineffable moment of irreversible loss will make it finally comprehensible. But death is not a time-stopping calamity, rather it’s the most everyday of occurrences. This is where the cognitive dissonance vibrates most harshly: “The end of a day on which a life has ended is still far from being the end of days.”

An individual life exists on a precarious timeline. A slight rearrangements of elements — a missed train, a handful of snow, an altered walking route — can make the decisive difference between the end of a life and the possibility of continuing on, even if just for a little bit longer. In The End of Days, Erpenbeck tells the story of a girl born in the far reaches of the Austrian Empire at the turn of the 20th century who dies as an infant. The catastrophic consequences of this originary tragedy for the baby’s parents spin out only to wind up back where they started: at that prematurely lost life. At this point, Erpenbeck reimagines the story. A window is opened, and with the help of a handful of snow, the baby survives. This starting, stopping, and looping back to start again forms the basic structure of the novel: five books with “intermezzos” dividing them, during which a few key details shift and the child who died — the novel’s protagonist — gets to live a little longer, only to die again, and then to live a little longer still. Having survived her brush with death as an infant, she becomes a teenager, starving, desperate, and heartbroken in war-torn Vienna; we see her emigrate to the Soviet Union, a good Communist nonetheless arrested by the KGB; she bares a son and reaches middle age; she lives to see the fall of the Soviet Union, and finally dies an old woman, senile and confused, but not yet ready to let go of life. She sees her epoch and the cataclysms it unleashed; “The century that used to be so young,” grows “terribly old.”

The protagonist only receives a proper name toward the end of the novel, and until this point we know our characters only as faceless abstractions. As the novel progresses the protagonist gradually gains definition, but still remains, to some extent, always an outline. Playing in this loose space of archetypes, Erpenbeck passes through writing styles, from tragic and folkloric in early 20th-century Galicia, to strident and ideological in 1930s Moscow, to aloof and sardonic in contemporary reunited Berlin. The End of Days manages a scope that seems entirely improbable considering its relatively scant page count and precise structure.

The protagonist’s life stories and the larger story of Europe in the 20th century are told in tandem, which serves to underline the fundamentally different nature and force that time exerts on a private, as opposed to historical, scale. We see war, power, and ideology shape and reshape the map of Europe with machinic inevitability, causing famine and genocide and chaos and destruction. But around these tectonic movements — Nazis, KGB, World War I, World War II, the rise of Communism, the triumph of Capitalism — individual lives continue knocking about on their courses, their futures never determined and always vulnerable. Many die, others live. When the protagonist falls victim to Stalin’s terror, it seems inevitable, but it is not. In contrast, when she tumbles down a flight of stairs at the height of her career, her death appears obviously, absurdly preventable.

But while the machinations of history might churn on a timeline outside that of an individual life, the macro is made of the same stuff as the micro. As the protagonist’s mother sleeps, hungry in Vienna during World War I, her husband looks at her and wonders, “how processes, circumstances, or events of a general nature — such as war, famine, or even a civil servant’s salary that fails to increase along with the galloping inflation — can infiltrate a private face.”

The desire to line up history, life, death, and various basic physical facts of an individual existence into some kind of congruence comes up again and again over the course of the novel. You can take the same bits of information and arrange and rearrange them, and they will not fit into any system. During the protagonist’s teen years, we meet her younger sister, who her parents call the “little” one. However, she is not so little; she is 5 feet and 7 inches tall. The mild incongruity of these facts serves to highlight the jaggedness of reality. The little sister muses at school about how Austria has gotten impossibly small over the course of the war, while she has gotten bigger — big enough that it doesn’t make sense any longer for her to be the “little” one. Time goes on, and names no longer fit their subjects. What kind of logic is at work here?

All this adds up to depict the substance of the world in Spinozan unity. Thoughts bear the same materiality as clattering bones. Erpenbeck writes:

It’s a shame that no one can see the boundary where words made of air and words made of ink are transformed into something real: as real as a bag of flour, a crowd in which revolt is stirring, just as real as the sound with which the frozen bones of Comrade H. slid down into a pit in the winter of ’41, sounding like someone tossing wooden domino tiles back into their box. When it’s cold enough, something that was once made of flesh and blood can sound just like wood.

Even as she survives death again and again, the protagonist (like everyone) is nonetheless living to ultimately continue her slow transformation into cold, hard calcium. The grief that will accompany her death is postponed or displaced, but never removed from the story. The novel portrays this reality in the stories it tells, and in its form and structure. Sentences repeat as situations repeat. The sense of relief at yet another opportunity to imagine the future of a life that was lost is cut by the knowledge that loss will win out in the end. One after another, decades apart, a mother, her daughter, the daughter’s son, all ask: “Does it make a difference to someone who doesn’t know the truth whether a person is dead or just very far away?” Nearly every sentence of this novel holds within it an acute awareness of the final tragedy of living a life on this planet: the knowledge that every moment of joy is also a promise of sorrow, and that this is exactly everything that we have.

Helen Stuhr-Rommereim edits features for Full Stop and is a founding editor of Fungiculture.