Faces in the Crowd – Valeria Luiselli 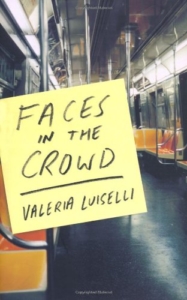 I asked myself, Who was going to write this review? I’d loved every page of Valeria Luiselli’s novel, Faces in the Crowd, and it’s the assignments you end up loving — the books you can’t help reading as a reader, not a reviewer — that leave you all mixed up. Aspiring novelist, discerning critic, circular essayist, unabashed prose enthusiast — any one of a writer’s identities, his or her separate selves, has something to say about a great book. Perhaps that, right there, is what makes great books great: engaging all selves at once.

Regardless of who I choose to be, Faces in the Crowd highlights the question itself more vividly, more urgently, than any novel I’ve read in recent years. “It all began in another city and another life,” Luiselli’s narrator warns us. “That’s why I can’t write this story the way I would like to — as if I were still there, still just only that other person.” In paragraph- and page-long fragments, she reflects on cities she’s traveled, objects in her house, past apartments she rented but couldn’t sleep in, her former life as a writer and translator in New York, the absurd soap opera of motherhood, her husband’s work as an architect, the lives of dead poets — anything that demands to be written down. Owing, ostensibly, to a lack of privacy and writing time, she believes these fragments are the only way she can write: “Novels need a sustained breath . . . Everything I write is — has to be — in short bursts. I’m short of breath.”

As a new mother, her time and energy are spoken for: “Now I write at night, when the two children are asleep . . . Before, I used to write all the time, at any hour, because my body belonged to me.” Borne from this enforced brevity (as well as her obvious resentment), the text of Faces in the Crowd feels like the shown work of a math problem or a crossword puzzle: in order to write anything, she has to write her way toward freedom. Luiselli’s narrator blossoms on the page, and it isn’t long before “freedom,” for her, means trying on different identities, different lives.

Not far into these fragments, she recalls an assignment she once had as a translator. On a routine library visit, she stumbles across a letter from the Mexican poet Gilberto Owen. “I live at 63 Morningside Ave,” the letter says. “There’s a plant pot in the right-hand window that looks like a lamp. It’s got oval-shaped green flames.” She realizes that 63 Morningside isn’t far from the library, and she visits Owen’s old apartment. After locking herself on the roof and spending the night outside, she decides to translate an edition of Owen’s poems for an American audience. She then begins a relationship with Owen’s work, as well as his correspondence. “If I believed in turning points,” she reflects years later, as a mother, as a wife, “I’d say that I began that night to live as if inhabited by another possible life that wasn’t mine, but one which, simply by the use of imagination, I could give myself up to completely.” For her, Owen becomes a ghost — the apparition of a face she believes herself to have seen on the subway.

At the same time, the narrator’s manuscript — the pages we’re reading as she writes them — tempts her husband out of his passivity. He begins to read the pages as well, often criticizing her when she includes something not quite true, whether mundane — “I don’t like zombie films. Why did you write that I like zombie films?” — or threatening — “Did you use to sleep with women?” This leads her to create a decoy novel, narrated — naturally — by Gilberto Owen himself. Combing her memory for biographical details she’d researched years before in New York, she imagines Owen in his youth, living in his Manhattan apartment and getting drunk with García Lorca. He narrates, however, from old age: exiled to Philadelphia where he slowly goes blind from sclerosis, desperate to spend time with his children. “It all happened in another city and another life,” Luiselli’s narrator’s Owen says. “Even if I wanted to, I couldn’t write this story as if I still lived there and were that thin young man.” Meanwhile, as their marriage begins to fail, the narrator’s husband spends more and more time with a client in Philadelphia; soon it becomes clear that he will leave her. “In Manhattan I died every so often,” Owen says. “What few people understand is that you leave one life to start another,” the narrator confirms, her heart set on having died that night on the roof at 63 Morningside. To close the loop, Owen decides he shall write a novel, narrated by “a woman with a brown face and dark shadows under her eyes, who has perhaps died.” Hereafter, either narrator could be imagining the other. Who, of the two of them, is Nabokov’s waxing, and who is its shadow?

If this sounds complicated, it’s not. At all. Faces in the Crowd avoids all the hostile tricks common among imbricated, polyphonic novels. It’s immensely readable, and yet it resists the neat, newspaper headline description: “Woman writes at night, may also be dead Mexican poet” not being the kind of thing that’ll sell a book. But neither, for that matter, would “Dublin man speculates that wife is having an affair, eats kidney,” or “Man crawls on belly through endless mud, uncertain of having encountered similar mud-dwelling individuals,” or “Woman buys flowers, thinks.” No — as a novel, Faces in the Crowd is best read as a novel, not a paragraph or a tweet, and definitely not a review. It’s a unique, inward fiction whose dimensions multiply as its narrator nears the total ecstasy of writing itself. “When a person has lived alone for a long time,” she says, “the only way to confirm that they still exist is to express activities and things in an easily shared syntax.” On the same subject, Owen isn’t far off: “I told [my correspondents] about my life in the metropolis, again and again, as if to make it my own, conscious, maybe, that happiness also depends on syntax.” We use words — the logic goes — to communicate, and we sequence them in a pre-established, widely-recognizable pattern; therefore, others will understand what we feel. However, in her essay, “Stuttering Cities,” Luiselli consider the “gift” of language:

In pre-linguistic infancy, when the shadow of syntax hasn’t yet eclipsed the radiance of the world, the rumbling of rs and the murmuring of ms are enough to say everything . . . But one day the soft sound of the m becomes attached to the a, and is repeated — mama . . . The moment we pronounce the name of that bond, our first and most intimate one, some link with the world is broken . . . Perhaps learning to speak is realizing, little by little, that we can say nothing about anything.

In this shadow — and it’s easy to catch it moving, now and again, in the novel itself — what are we to make of the narrator’s hope to prove her existence? Of Owen’s attempts to convince others — acquaintances he barely knows — that he’s happy? Perhaps each has realized why they write: not to find a link with the world in which they can’t seem to belong, but to create a world in which they can. “He asks how much is fiction and how much fact,” the narrator says of her husband, defending her work every morning. His obsession — his perfect, misguided jealousy — misses the point entirely. Fiction isn’t real, of course, but it’s here because someone needed a reality that made sense.