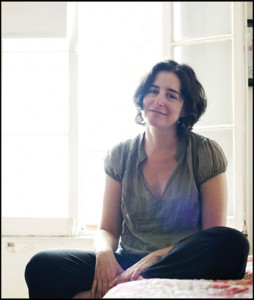 Aimee Bender is the author of two collections of short stories, two novels and one novella, and her work has been published in Granta, Tin House, Harper’s, McSweeney’s, and The Paris Review. You can read our previous interview with Bender, published earlier this year, here.

Absolutely. But there are many ways to respond. There are the writers with journalistic skills who are able to tell about the situation via fact and story; there are the people directly involved who will tell their own personal stories, and there are others impacted who will tell the stories in more metaphorical ways that are less easy to track but still deeply influenced by these upheavals. There’s a clunky writing exercise I give in a class about building scene, where the book (that holds the exercise) asks each writer to follow very specific instructions: write a sentence describing a character’s hands, write a sentence about the weather. One of the instructions is: write a sentence including a current event. It’s kind of hilarious. Usually it fails miserably—“He leaned on the bookshelf, thinking of Hurricane Katrina”. You can’t just cut and paste current events — they have to be felt and moved through to work. But, on occasion, a student will weave one in beautifully. I feel similarly about a writer’s job — yes, we are here to respond to the world, but sometimes it takes awhile to process events and let them happen naturally on the page.

No, not a definite audience. Whoever responds to the work! Whoever catches (more or less) the ball I threw. My hope is that the audience has grown but really, who knows. They say the Kindle is getting people to read more; they also say that people are reading more shallowly, or so says a very convincing Nicholas Carr in The Shallows.

Well, I think everything’s moving online. I think the websites doing reviews are gaining more validity and the “valid” places have websites and the era of cultish web feel is largely over. But, of course, the cuts are big and less people are paid to do this work. Now we have an almost endless group of unpaid critics, and it can be hard to figure out who to listen to.

Nope! Not a chance. This was never, ever the goal for me, and I tell my students to expect to have another job. In my mind, a person does not ever go into fiction writing with the hopes of making a living. But, this is also freeing; if a writer knows she has to have another job, the writing doesn’t have to follow the marketplace the way it might if bills depended on it. I think this has been the case in years past, too — there were more venues for publishing, but generally I think writers have had to figure out a way, scrappy or otherwise, to stay writing.

Let’s see. I figure every individual is a mix of various points of view and influences. I think I am definitely writing as a Gen X Jewish woman youngest child from the West Coast, daughter of a psychoanalyst and choreographer — but how each of these categories manifests itself is not immediately clear. For example — I don’t really think of myself as an L.A. writer but I do think the amount of daydreaming time an L.A. resident gets from all the driving can help cultivate a certain kind of non-realist landscape in the mind. I don’t usually write on Jewish themes but I feel like some sort of Yiddish/Biblical storytelling is in my bones, as are fairy tales, which I read so constantly as a kid. It all goes in.

Well, it’s not a strength of mine, and I admire writers who can do this and do it well. I really liked Gary Shteyngart’s latest book and how it approached technology and war. And the various post 9/11 books I’ve read are all very good books — but I suppose I think the work that will resonate the most about that moment hasn’t been written yet. My favorite World War II books came out decades later, though of course that’s also a far vaster string of events to process. I look to Jim Shepard as someone who translates current experiences and history beautifully. I also found Nick Flynn’s thoughts and poems and reflections on torture to be very helpful because I needed and need some help thinking it through that I could not get from articles. Poetry and memoir were very useful ways to begin to sort through such a difficult topic — Flynn holds a kind of lantern into dark spots which makes it easier to follow him in. Lately, I’ve found I’ve been wanting to write more about the environmental impulse in people because I think it’s ripe for comedy and I see in myself so many absurd over-zealous actions. Often I just want to lampoon myself as a stand-in for others who I’m guessing do the same thing.

I do think writers have a responsibility and should participate when they feel they have ideas to add and stories and poems and plays and more to write. Ultimately, as I felt with Nick Flynn’s book The Ticking is the Bomb, writers spend time and thought and feeling going over these experiences, and can be incredibly helpful to readers in this way. But I also don’t want to think that just because I am a writer I have things to say on all important topics. I’d have to earn my keep in this way. I heard Nathan Englander talk once something about how he was consulted on trout fishing just because he was a writer and he knew nothing about trout.  That said, I do have opinions, or wonderings, or questions. About how the Cold War affected me as a child, and how this nebulous war affects us now. About how the concept of enemy has changed and how bombs from airplanes differ from combat, and about the impossibility of defeating terror, and about how America is seen from a range of places and experiences. All this rolls around in my head, and I’m sure in some way or another it will show up in my work, but I can’t predict how.