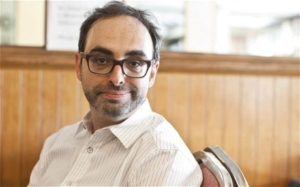 Image via The Telegraph

Gary Shteyngart is the author of three novels, the most recent of which is Super Sad True Love Story. You can read another interview with Shteyngart, which was published earlier this year, here.

Well, I’m the kind of writer who is interested in the whole world around him, and I mean the whole world from the Arctic Circle to Capetown, not just a few zip codes in Western Brooklyn. Having said that, I don’t think a writer has the responsibility to do anything, other than write and write and write until they come to cart us away to the loony bin or the grave.

I think the audiences for serious literature have been contracting for a while. I get a nice balance of age and gender at my readings, but I do fear that eventually the audience of readers and writers will be one — essentially, we’ll just be writing for our writer friends. Which sounds cute, although I’m not sure how it will pay for my dental cleanings.

Positive criticism is good, but negative criticism is okay too. When there’s no criticism, that’s when the problems begin. The destruction of the literary supplements and other outlets has an adverse effect on how much time I have to promote the book, make crazy trailers, etc. In essence it takes three times longer to get the same results as one did six years ago. By the time my next book comes out the time spent promoting it will probably exceed the time spent writing it. But hey: dental cleanings.

I’m lucky enough that I don’t have to do other things if I didn’t want to, but I like teaching and travel writing and HBO pilot writing quite a bit, so I do those too. The idea is that if the primary thing — the novels — completely cease to exist I’ll always have something else to fall back on. Then there’s air conditioning and refrigerator repair. There will always be a need for that.

Yes, I’m totally an individual! I don’t belong to any organization. I’m even canceling Netflix.

Well, it’s hard to keep up with this country’s decline. But people have been doing their best. It’s hard to be a novelist when Herman Cain’s latest horndog exploits call out for no more than a tweet. There used to be people who could take up entire novels.

We’ve also had an unending war against drugs. That’s been fun. Again, as writers we have no responsibilities other than to make sure that our work doesn’t suck. We are a warlike people and we will always be dropping bombs on others. When the bombs start dropping on us in earnestness, that’s when our real work will begin.