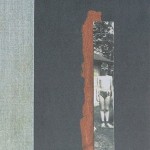 “I wanted to fill my elegy with light of all kinds,” Carson begins in Nox, written for her estranged brother ten years dead. “But death makes us stingy.”  Nox is a history as well as an elegy, charting her brother’s life through memories, photographs and letters, and recording Carson’s own process of translating Catullus’ poem 101, an elegy for a brother.  The methodical, laborious working out of the mechanics of the poem becomes a metaphor for the way we live with loss and absence, not as a sudden happening, but as a practice, as a condition of being. Carson takes us into grief but also the process of computing it, while simultaneously allowing us to witness the impossible project of translating it from private to public experience.

Nox is marvelously designed as an accordion book (it comes in a box)—you can turn the pages one by one or spread out many at a time.  The book consists of a series of English definitions for each Latin word of the Catullus poem pasted in from a dictionary (they are both found poems and found objects), accompanied by Carson’s prose poems that double as translator’s notes.  In between are Photostats of letters, envelopes, postage stamps, and black-and-white childhood photographs with ribbed edges.  “It is when you are asking about something that you realize you yourself have survived it,” Carson writes, “and so you must carry it, or fashion it into a thing that carries itself.”  The book, the thing that carries itself, is composed with a fierce sense for its materiality; where Carson has made a drawing, smudges of pencil are preserved on the opposite page, or the impression of the pencil tip recorded on its back, as though we were turning the pages of someone’s journal or scrapbook, an object recently marked up, seething with life.

Carson is the quintessential scholar-poet.  A Classicist, she has translated Euripides, Aeschylus, and the complete fragments of Sappho, and her most lauded work, the verse novel Autobiography in Red (1998), is an eccentric modern day telling of the Greek myth of Geryon.  Carson appropriates the often clinical, precise language of scholarship in her creative work, blurring the distinction between the essay and the poem, the cerebral and the emotional, but it’s more than just affect.  The essay and the poem have in common the attempt to scale the vast, senseless world down to human size.  The role of argument and logic in Nox is to show how inadequate these devices are, but never to mock them, or our reliance on them; more importantly, Carson demonstrates and observes the way we persistently use what we can, what is available, to capture unspeakable, unattainable experience.

Carson’s voice is candid, uncompromising, full of furious calculation.  “His voice was like his voice with something else crusted on it, black, dense,” she writes of a phone conversation with her brother after his flight.  In passages like these, when Carson turns to descriptions of her mother and brother and those specific, stilted encounters with them overflowing with complex feeling, she is at her most vulnerable and her most generous.  Nox is about the metaphysics of life and death and the translator’s imperative, but maybe most importantly it is a book about custom—the rituals we build up around death and the persistence of life, the gulfs between people so close they don’t know how to speak to each other, the alienation of family, the inadequacy of language as our only recourse for telling our stories.

In a way, custom is also the defining feature of translation, which mixes creativity with duty, infinite possibility with finite meaning.  The poem is a closed room, Carson says, “not exactly an unknown room, where one gropes for the light switch.  I guess it never ends.  I prowl him.  He does not end.”  Translation, grief, personhood—each is at once expansive and limited, more than itself and no more than itself, like the accordion book that can spread the length of a corridor or fold back into itself, like the sprawling dictionary entries that list so many minute gradations of just one thing. Nox is mystifying and exquisite, and, to reverse Carson’s metaphor, it opens doors that won’t close—even once you fold the book back into its box, you remain inside it.