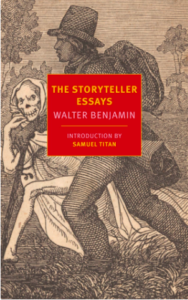 Tr. from the German by Tess Lewis

Walter Benjamin’s 1937 essay “The Storyteller: Reflections on the Work of Nikolai Leskov” opens upon a lament for storyteller’s decline:

As familiar as the name sounds, the storyteller is far from an active, living presence in our lives. He is already a distant phenomenon and is moving still further . . . An experience we have almost every day dictates our position and viewpoint. It tells us that the art of storytelling is dying out. Encounters with people who know how to tell a story properly are becoming rarer. And ever more frequently an awkward silence spreads through a group when someone expresses the wish to hear a story. It’s as if a capacity we had considered inalienable, the most reliable of all our capacities has been taken from us: the ability to share our experiences.

The silence left in the absence of the storyteller has, in Benjamin’s formulation, been suffused by information. Information, this endless stream of occurrences omnipresent before us, suffers from a surfeit of explanation: “Every morning, news reaches us from around the globe. And yet we lack remarkable stories. This is due to the fact that no incidents reach us not already permeated with explanations . . . In fact, at least half of the art of storytelling consists in keeping one’s tale free of explanations.” Stories rely upon a central ambiguity, an ability to drift one way or another, to possess a multitude of meanings simultaneously. Stories occupy the register of the collective commons, a communistic crafting which always denies the provenance of authorship in so far as each story belongs equally to teller and listener, mutable as to the particulars upon its subsequent retelling. Information has none of the story’s mystifications. Something has simply happened for a particular set of reasons, “a side effect of historical secular forces of productivity that have gradually eliminated the storyteller from the realm of living speech and at the same time have made a new beauty visible in what has disappeared.” If “boredom is the dream bird that broods the egg of experience” and gives rise to the possibility of storytelling, lives increasingly bent towards the harried, incessant pacing of capital’s regime of labor denies the generative space whereupon experience can become a story. Benjamin attests that storytellers “flourished in the world of manual labor” as their own craftsmanship begot the need to work double duty, crafting stories to fill the lacunae of silence amidst the workday; barrooms and back porches proliferate stories, call out for them even, as do all those other spaces wherein people gather and pass the time by filling the lacunae of quiet, that lingering with purpose. The novel comes to eclipse the story, “the individual in his solitude who is no longer able to speak about his most important concerns in an exemplary way, who has no one to counsel him and has no counsel to offer” replaces the storyteller’s ability to advise via a storehouse of experience, experience both one’s own and always already someone else’s, a tapestry sewn piecemeal from lives which demand our memory. The story is a salve upon the violence of time’s passing, delimiting what death can take.

Published initially in the final issue of the Swiss review Orient und Occident (which had but thirty-five subscribers at the time) and later included in the posthumously collected and much heralded Illuminations, “The Storyteller” seems an unlikely candidate for reissue, yet the newly published collection The Storyteller Essays, translated by Tess Lewis and edited by Samuel Titan, marks a unique achievement. It provides a brief intellectual history of an essay and revivifies it, historically situating it as less a lightning strike of genius than a carefully reworked set of rigorous inquiries and diverse interests developing over more than a decade, estranging the reader just enough from the original composition to provoke ostranenie. The Storyteller Essays proposes we imagine “The Storyteller” as the culmination of a cycle of writings instead of a standalone piece, allowing the reader to see Benjamin slowly assembling the scattershot pieces of what will come to be one of his seminal writings. Beginning with the 1926 essay on Johann Peter Hebel and the Kalendergeschichten, Benjamin first arrives at his rendering of the difference between the storyteller and the purveyor of information: “The historian limits himself to ‘world history,’ the chronicler recounts the ways of the world.” In his review of Berlin Alexanderplatz, we find an early formulation of the tension between the epic form and the novel, as well as the deeply couched hope that will permeate the later essay (included herein) “Experience and Poverty” and eventually “The Storyteller” that a new form will renew the novel from its bourgeois stagnation in the realm of the isolated, alienated individual. In the 1931 children’s radio tale “The Lisbon Earthquake,” Benjamin rehearses recounting a cataclysm in the mode of the storyteller rather than the historian, moving seamlessly from the local to the global prior to estranging the geological in a translation to the mystical: “This means that the earth is always trembling, but mostly so lightly that we don’t notice anything.” In “The Handkerchief,” Benjamin even moves into the realm of straightforward storytelling, a piece in which the ship’s captain who tells the tale to the narrator seems to exist in a different time altogether, speaking occasionally of politics but never reading a newspaper. These various pieces echo one another, each carrying the marks of the prior, until the reader arrives at “The Storyteller” itself which by then takes on the character of a collage, lines copied verbatim or lightly reworked, variations on a theme taking fuller and more careful shape. It allows the reader to see the essay deconstructed, to witness the decade of labor that preceded it, to see Benjamin as himself both craftsman and storyteller, trying out novel ways of relating this story of the slow demise of stories. The collection concludes with a series of texts mined and cited in Benjamin’s essay. These fragments and short pieces by Bloch, Valéry, Lukács, Montaigne, Herodotus, and Hebel feel superfluous, tacked on to expand a work that otherwise would not exceed seventy-five pages (and even now barely surpasses one hundred).

I cannot recall the last time I heard a story. When I initially posed the question to myself to discern from a memory any particular story, this lapse appeared peculiar. I can rattle off any number of narratives: plots of novels and films, historical happenings, piece of reportage, my day to day doings and those of others which have been related to me. Yet a story exists as something else altogether. Stories rely on their iterability, extant within a system of circulation, mobile and memorable. Stories wander, not only in their own internal journey from opening to conclusion, but in their rambling from one tongue to the next. The movement of stories, however, has as its condition of possibility the temporality of leisure. Stories arise from the wellspring of idleness. Their creation and transmission rely upon moments of stillness, which is to say, spacetime mutually inhabited outside of the production of capital, fugitive, stolen time. The story relies upon place, deeply rooted in the specifics of locality (even if that locale is the no place of some utopia), while simultaneously existing within the realm of allegory, possessing the ability to render world history as an intertangled web in sweeping transit, in defiance of the causal. A story has a moral. It also has a teller. A good story is hard(er and harder) to find. The Storyteller Essays reminds us of the rarity of one “who can allow the wick of [their] life to be entirely consumed by the gentle flame of [their] story,” and allows us to all the more clearly see that Benjamin’s essay bears the trace of it being but a story, told again and again, of how we have filled the silence.