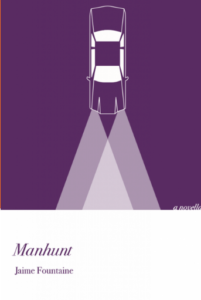 In coming-of-age stories, adolescence is easily compressed into a bumpy if ephemeral way station. Children are wholesome, adults are adults, and whatever happens in between is ugly and liminal. Even the most pivotal decisions and indelible experiences serve as preparation for something more honest and permanent. Narratives — those written and those we tell ourselves — naturally carry the day. But why should adolescents be any less true, any less themselves, than the people they’ve been and will become?

Jaime Fountaine’s Manhunt is the rare bildungsroman less concerned with outputs than with inputs, treating the crude precipice of pubescence as an absolute. Fountaine’s nameless, not-a-girl-not-yet-a-woman narrator recognizes that her existence is itself transitory, juggling new obligations to herself, her mother, and her peers. At age thirteen, she’s quickly outgrowing training bras and drawing the wandering eyes of boys and full-fledged men alike. The novella is less a movement through time than a dawning realization that being a woman means lacking determination even if maturity suggests liberty. There’s an awareness that the interstice will eventually come to an end, but no assurance as to whether that’s a good or a bad thing.

The narrator and a coterie of neighborhood kids pass suburban summer evenings playing manhunt, a convenient excuse for the more mischievous among them to pair off and fool around in the dusk. “In the game, a man is a person who can fend for himself,” she professes with typical bluntness. “It’s not called Womanhunt because that would be a crime.” Still, it’s an apt metaphor for the sudden attentions lavished upon a developing young woman: Male predators sense a hot new commodity, and the hunt is on.

A sharpening awareness of her own physiology — not to mention the hopeless duality of occupying a body that others would use for their own devices — propels Manhunt’s languid tension. The dialogue isn’t emotive so much as brusquely transactional. “Now my body isn’t my own,” she concludes while considering an old bathing suit. “It belongs to everyone else, and no one likes it the way it is.” She carries on a half-hearted summer dalliance with a classmate, Jason, who dictates that their encounters remain a secret. Meanwhile, she’s unwittingly drawn the affections of a menacing older boy, Drew, whose aggressions include cornering her at the grocery store and following her home from babysitting jobs.

Given a lack of supervision on the home front — her single mother wavers between drunk and hungover with minimal deviation — the narrator poses both an easy and disposable target. Jason’s eager to scurry off with her, knowing all the while that the comparably polished girls with protective fathers will make more presentable partners in the long run. Drew discerns that a woman left unattended is liable to seek companionship wherever she can find it.

Manhunt’s narrator swears she won’t grow up that way, if only to spite her pathetic, lovesick mother, who lures home indistinguishable red-faced men from bars and eagerly submits to their rage and indifference. The narrator is left hungry and poorly clothed while her mother paints the town, after which she’s called upon to console the drunk, despondent older woman over her latest breakup. The other women in her life don’t offer much in the way of role models, either. Jessica, a neighbor whose small children the narrator babysits, gets “extra dressed up to eat chips and salsa at the bar of the Mexican restaurant in town with her friends because she’s upset with a man.” Even her own peers are dependent and subjugated, deriving their self-validation through the male gaze. The other girls lack detail as characters, but no matter — after all, they have roles to play.

Still, as wary as she is of these examples, she craves intimacy and finds empowerment in the unanticipated allure she holds over men. Her sexual awakening doesn’t unfold as a wondrous discovery so much as an obligatory assignment. There’s gratification in the flattery she draws from men, even a slight thrill in being hunted — if only because she’d otherwise be ignored. Yet the respectability politics she’s forced to navigate are as confounding as her raging hormones.

The mere fact of her sexuality poses a threat to her female peers — chiefly Emily, whose unrequited crush on Jason makes an enemy of the narrator. “It’s not my fault that Jason wants to see my boobs instead of hers, but she won’t think about it like that,” she realizes. “He’ll be something I’ve taken away from her.” She’s a constant reminder of her mother’s fading charm, an unfavorable contrast for the men she brings home. “The only thing worse than being in my body,” she despairs, “is the way my mother looks at it, half jealous, half horrified.” Empowerment comes with risk of shame; the femme fatale is at once a target, an adversary, and a scapegoat.

Most frustrating in these straits is the lack of authorship. Simultaneously catering to male desire and feminine decorum, she’s afforded neither expression nor autonomy, prioritizing others’ wishes and expectations over her own. A trip to a department store is emblematic. “The lingerie department is divided into two categories: sexy and grandma,” she narrates. “I don’t want either. I just want something I don’t have to think about.” Even the matter of consent is bewildering. “What’s the difference between saying ‘yes’ and wanting it?” she asks two female friends when tactfully discussing their respective sexual escapades. They’re stumped.

In Manhunt, coming of age means coming to grips with powerlessness. It means making due with slim, hard-won liberties against overwhelming pressure to submit and conform. It’s a harsh perspective both softened and made poignant by its conveyance through a thirteen-year-old’s eyes. Fountaine’s voice is authentic, making a hero of her tragic narrator for the way she confronts hate with befitting cynicism and stoic humor. An adult would take this stuff more seriously, but Fountaine’s narrator doesn’t know any better.

Manhunt’s protagonist doesn’t emerge from her trial stronger or wiser. If anything, she’s developed unhealthy coping mechanisms, a numb caution which inspires her to meekly pick her battles and compile small victories wherever she can. But the journey isn’t the point so much as the process, one which might easily go overlooked. With her novella, Fountaine vividly evokes the suspension of childhood, the shapeless, unsupervised hours when maturation actually happens, the village which raises a child and emphatically beats her back down.

Pete Tosiello is a writer based in New York City. His criticism, reportage, and interviews have appeared in The Washington Post, the Los Angeles Times, Vulture, and The Outline among many others.