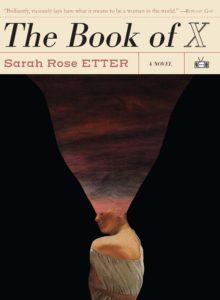 Sarah Rose Etter’s The Book of X opens with a birth: “I was born,” says Cassie, the novel’s protagonist, “a knot like my mother and her mother before her.” It’s a fantastic opening, polymorphous and impossible. One might mistake it for a metaphor, until it rolls into a world where doctors lift “slick warped bodies into the air and stare, horrified.” Of the opening line, Etter has said, “It felt so true to me — looking at my own mother and grandmother, the idea of a heritage of anxiety, of body issues, of being handed a terrible trait in your genes.” The knot, while fantastic and impossible, is not a figure for the otherwise impalpable. Embodiment is the fulcrum. As Cassie moves through the thorny cruelties of girlhood, the violence of early sexual experience, the prognosis of doctors, the alienation of a desk job, and the sorrows of loss, embodiment and how it mediates our experience remains central.

And yet, if you told me this novel was about embodiment, I would say Yes, but isn’t it about something else? Call it mood, maybe. The way Ari Aster’s brand of horror is about grief, and grief — in his films — is no simple sorrow. It’s murderous. Nightmarish. Surreal. It is horror, yes. But fear here has less to do with instinct and survival than aloneness and despair. The reviews say Aster’s movies are about cult mentality, but I think no. That’s just the story. The movies are about something else entirely. Like this, Etter’s novel is about embodiment, yes, but it is also about mood, about a very specific kind of aloneness. Call it alienation. Call it the surreality of being some body that story cannot capture fully.

Perhaps, this mood is the result of Etter’s unique fusion of the conventional and the experimental. In so many ways, the narrative is not unusual: a girl is born, grows up, finds and loses love, then dies. She goes to school and experiences the cruelties of girlhood. At home she witnesses, with yearning and ire, the division of family labor. Her brother and father go off to the quarry, while she and her mother scrub the kitchen. She gets a desk job, eventually, and moves to the city. Yet, so much of the narrative is elliptical, and the otherwise ordinary world is warped with bodies. Throats, like stalks of wheat, sway in the breeze. The quarry is a place where glistening hunks of meat are harvested daily. Torsos — like bicycle frames — hang from the ceiling of a store that sells boyfriends. These features lend the otherwise ordinary narrative a surreal and estranged feel.

In an interview with Two Dollar Radio, Etter spoke of writing the novel alone in rural Iceland:

Days when the clouds would part and it truly did look like heaven. It’s the youngest earth on our planet — it’s still evolving as you stand on it. There were huge moments where I felt I was being given gifts by being there — I’d wake up to see a rainbow over a volcano, or a bunch of birds would fly into the cabin and I’d have to release them by hand. The last scene in the book is really a result of waking up in the middle of the night and going deep into the Icelandic National Park and seeing the sky split open and the Northern Lights come out, alone.

This sense of standing alone, on the cusp of something strange and beautiful, of bearing witness, of attempting to capture or hold it, is the feeling or mood that sits with this story. It is about, maybe, being inside a body, inside that quiet and persistent yearning for everything beyond the self.

Jessica Alexander‘s story collection, Dear Enemy, was the winning manuscript in the 2016 Subito Prose Contest, as judged by Selah Saterstrom. Her fiction has been published in journals such as Fence, Black Warrior Review, PANK, Denver Quarterly, and DIAGRAM. She lives in Louisiana where she teaches creative writing at the University of Louisiana at Lafayette.