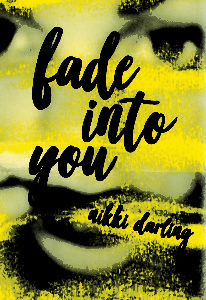 In Fade Into You, high school junior Nikki alternates between antagonizing her peers and longing for connection. She chases a boy who prefers men, she turns her back on an old friend in favor of a new, she covets the energy of a classmate whose hospitalization roils the whole school. In short, she’s a teenager.

She is also the author, Nikki Darling, fictionalized in the tradition of New Narrative authors like Eileen Myles, Michelle Tea, Chris Kraus, and Salvador Plascencia (whose work the style of which is also the subject of Darling’s dissertation work as a PhD in Creative Writing at USC). Her poetic inner life and shades of past family tragedy inform her every move as she treads water at the Los Angeles County School for the Arts, unsure of whether her choices are bringing her closer to or further from herself.

The entire novel is an act of performance. Darling subsumes herself into the fictionalized version of her teenage self and this character, Nikki, performs rituals of self-identification and embodiment. This teenage New Narrative sublimates the genre’s tendency towards eroticism and abjection — Nikki is, after all, still a young girl with vulnerable hopes interspersed among her proclamations of despair and drama — and reinforces the tensions between cliche and authenticity; between adopting something as your own and producing meaning out of a pre-constructed persona. Where New Narrative authors borrowed from each other, Darling borrows from the stars of her adolescence, immersing Nikki’s life in the pop culture of Kathleen Hanna and Groucho Marx and Hole and countless other artist-icons (the book itself shares a name with Mazzy Star’s biggest single). The style offers opportunities for Darling to undermine a typical coming- of- age desire towards closure and a sense of the future. What she creates instead is a world for exploring the fluid boundaries of adolescent cultural identity.

Nikki is White, Spanish, and New Mexican, so these figures also represent broader signifiers of heritage; her attachments to these famous figures fill out the specificities of her ethnic identity. She ruminates on her cultural rootlessness throughout the book, grieving her difficulties of fitting into one box. She forms her identity by adopting some Chicanx cultural touchstones and rejecting others, superimposing the complications of Southern Californian ethnic heritage onto the tried and true adolescent tradition of consumption-as-identity. Through this construction, Darling is capturing universal references for 90s Chicanx youth in Nikki’s story while maintaining Nikki’s urgent need to feel her own feelings. Nikki is in the liminal space of knowing a life is out there to occupy, but all she gets to experience are the explosive seeds of emotion that will take years before they coalesce. Her pop culture icons serve as avatars for an understanding of what’s happening to her, giving it a face to grab onto while her own life still sways in its formlessness.

This tension follows a similar faultline as the difference between cliche and self-identification. Is pursuing connection with something prescribed an act of safe expansion or narrow self-enclosure? The answer for Nikki is unclear. Teenagers seek out cliche in their daily life, so Nikki’s propensity for Cali girl self-identification is a primary component of Nikki’s book-length attempt to define herself, to understand herself, to make sense of the world. But it also creates a moving target out of Nikki’s internal world and voice. When are her words hers, and when are they reflections of a world she’s trying on for size? In performing this cultural model, Nikki searches for the edges of her own body.

Darling’s emphasis on Nikki’s adolescent now-ness prevents this question of authenticity from overwhelming the entire story. The book is only 180 pages — more diary entry than bildungsroman — and Nikki’s point of view is quick and sharp. The short length reinforces her evocative voice because there is no room for anyone else’s input. The adult interactions are brief and, while potent, do not interrupt the book’s teenage timeline. Nikki’s perspective reigns; Darling avoids self-consciously inserting adulthood into her prose. Nikki’s narration swims through car rides and cutting class, with a timeline as hazy as the weed she and her friends are always smoking. She experiences her life with an emotional imminence refracted through the priorities and concerns of a high schooler. She goes to a party and can tell “things are about to get real cinema tonight;” “Marijuana wipes my brain clean,” she writes after declaring “Tori Amos is a revolutionary.” She describes life as a teenager in LA, how “[w]e stand on dark street corners waiting to kill our own, we drive by in cars ready to annihilate our faith in ourselves, ready to destroy that which is most sacred.” Life is keyed up with the urgency of teenage emotion as nascent wisdom pokes through her adolescent cries.

This immediacy reinforces the power of self-performance and cliche in the process of building out an internal self. A cliche when describing California is noting an absence of roots and history; as most cliches go, this is both patently false and an indication of an absence of curiosity and abundance of privilege. Fade Into You is a book about a California girl who is selective about disclosing her history, and the strength of whose roots seem more dependent on her mood than anything else. When Darling writes about LA listlessness, then, she is not falling into a trap of repetitive California writing. She is showing how Nikki, at age 17, is seeing for the first time the ways in which her environment may be part of her. In every trip to get punk t-shirts on Melrose or listen to Pink Floyd at Griffith Observatory she is not merely coming of age; she is coming of culture, of heritage, of community. During parking lot conversations and Target runs and freeway escapes (countered by the drudge of commuting by bus in LA), Darling plants Nikki’s story square in the massiveness of Chicanx LA County; Whittier and the SGV and East LA and South Pasadena are the geographies of Nikki’s teenhood. These are the places where Nikki argues her cultural inheritance with Mexicans and gringos in between getting stoned and resenting both the absence of her father and the presence of her mother. The path forward for Nikki is unclear, but LA has plenty of room for her uncertainty to stretch its legs.

The book is a short and poetic snapshot, leaving no time to ruminate on anything but the present. It encompasses a small part of Nikki’s youth — a handful of days, really — so any question of feeling or identity she grapples with over the course of its quick length must be considered with an equally focused lens. The story is an undigested amalgamation of cultural references and formative experiences, and Nikki performs and postures herself into meaning and narrative. Nikki is telling her story it to feel her feelings, see her world, and feel the sharp pull of youthful confusion and possibility. What happens next is not her concern; it’s the now that counts. In the absence of a clear past and a clear future, all she can hold onto is the immediate moment.