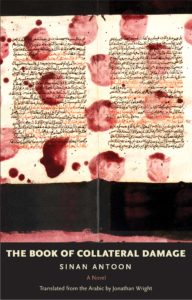 Tr. from the Arabic by Jonathan Wright

On March 19, 2019, the 16th anniversary of the invasion of Baghdad, Ari Fleischer, the former press secretary to George W. Bush, embarked on an ill-advised tweetstorm. “There is a myth about the war I have been meaning to set straight for years,” he announced, like a drunk dinner guest declaring and another thing! an hour after conversation has moved on. “After no WMDs were found [in Iraq],” he wrote, “the left claimed, ‘Bush lied. People died.’ This accusation is a lie.” As a startled (and incredulous) internet watched, Fleischer proceeded to argue that the mistakes made in the run-up to the war had been a result of misleading intel, not lies, and Bush Jr. and everyone else had just been trying their best, so back off, okay? “Serious historians and other experts [should] do their homework and resist falling for this myth,” he concluded, sanctimoniously.

Fleischer’s abrupt diatribe was mystifying — in part because Bush, who has made a habit of not drawing attention to himself since leaving office, has found himself enjoying a recent swell of popularity that would’ve been unthinkable ten years ago. More appalling, however, was Fleischer’s trivializing of a widely condemned war that rewrote the course of an entire country and left America’s international reputation in shreds. Gone was the $800 million price tag, the hundreds of thousands of Iraqi and American casualties, the destabilization of the Middle East and the subsequent rise of ISIS. In Fleischer’s revisionist telling, the Iraq War’s most unjust victim has been Bush’s reputation. The rest? Collateral damage.

Which brings us to The Book of Collateral Damage, the new novel by the Iraqi writer Sinan Antoon. Fleischer’s tweets are, of course, hardly the first time Iraqis have been erased from their own story; even the burgeoning field of Iraq War literature, however critical — Redeployment, Billy Lynn’s Long Halftime Walk, The Yellow Birds — casts the war as an American plight. The Book of Collateral Damage refutes and redefines this idea. The very concept of “collateral damage,” after all, rests on the logic that others lack their own stories. They are only a means to an end: an acceptable loss, a supporting character in the narrative of someone else’s war. But to what extent? Within the framework of Antoon’s novel, it is not just the country’s people, or history, or cities, that have been reduced to collateral damage in the great American tragedy of the Iraq War. It is Iraq itself.

Originally published in Arabic in 2015 and newly translated into English by Jonathan Wright, The Book of Collateral Damage is narrated by a man named Nameer, who left Iraq in the early ’90s for the United States. The novel opens in the summer of 2003, when Nameer, now a PhD student at Harvard, returns to Baghdad for the first time in ten years to serve as a translator for an American film crew. In the wake of the invasion, he finds a shattered, paranoid city. His childhood home has been blockaded. Tanks roam the streets. A family reunion devolves into a heated argument over whether the American troops are saviors or intruders. With each day, Nameer feels more like a foreigner in his own home, and when the trip concludes, he accepts, resignedly, that he will never return. “I wanted to find the Tigris and say goodbye to it . . . [but] the Tigris looked so pale on this visit,” he muses. “Did anything look the way I remembered? Nothing had managed to escape turning pale.”

Before returning to the States, Nameer visits the famed al-Mutanabbi Street, known popularly as the Street of Booksellers, where he meets a merchant named Wadood. Over the course of their conversation, Wadood tells Nameer that he’s begun working on a documentation project about the war: a massive catalog of all the things destroyed in the first minute of the invasion. Wadood describes this catalog as a “three-dimensional space,” home to dozens, if not hundreds, of stories written in the form of “colloquies” and narrated from the perspective of their subjects: not just humans, but also buildings, trees, birds, statues, musical records, works of art, historical artifacts, and so on. Intrigued, Nameer offers to translate the book into English, and Wadood reluctantly gifts him the first part of the manuscript to read.

Upon returning home, the shadow of the war continues to hang over Nameer, even as he accepts a teaching position at Dartmouth College. Unable to pick up Iraqi news channels in his apartment, he begins stealing into the college’s lecture halls at night to watch footage of the war. He clips articles about Iraq from the local newspapers; he imagines one novel, then another, about ordinary Iraqis caught in the grisly aftermath of the invasion. Meanwhile, the obliviousness of those around him only leaves him more isolated. His girlfriend and his therapist both suggest he’s grown unhealthily obsessed with the war. A student asks him for the Arabic words for “stop,” “kneel down,” “hands up,” and “move back,” so he can use them when he joins the army after graduation. He helps another student plan a protest against the war — only to find, when he arrives, that the students have completely neglected to mention the number of Iraqis killed, deciding it would be “better politically” to only focus on American casualties. Every interaction, from renewing his driver’s license to riding in an elevator with an elderly neighbor, reinforces Nameer’s status as an “other.” Only Wadood’s manuscript offers any kind of solace, and Nameer finds himself increasingly drawn to its emotional, evocative colloquies, even going so far as to start compiling his own catalog of “collateral damage.”

If the opening pages of The Book of Collateral Damage feint towards a familiar-seeming narrative of war and displacement, these snippets of scene, interspersed with chapters from Wadood’s manuscript, bear more in common with the introspective tone of autofiction. Adrift between identities — an outsider in his own life — Nameer bears a strong resemblance to the detached, restless narrators of Rachel Cusk’s or Teju Cole’s fiction: precise and hyper-observant, a collector of detail and anecdote. Even in the midst of emotional turmoil — breaking up with his girlfriend, for example — he remains muted and calmly analytical above all:

I was tired of the constant arguments, which drained me psychologically . . . I realized that we had really started to part ways and that the geographical distance between us had started to translate into emotional distance too . . . after that conversation I decided that the relationship had to end officially.

Autofiction, by definition, centers around questions of the self — its creation, its role in relationships, the influence of society — often blurring the line between narrator and author in the process. And Antoon has provided plenty of clues that Nameer is, to some extent, a version of himself: both men left Iraq in 1993; both earned their PhDs from Harvard before going on to teach Arabic Literature at Dartmouth and NYU; Nameer imagines writing a book about an Iraqi man who washes the bodies of the dead; Antoon’s previous novel is called The Corpse Washer.

But The Book of Collateral Damage, like Cusk’s Outline trilogy, pushes the form one step further, commandeering autofiction’s nebulous, probing nature to interrogate the loss of self. It has been well established that trauma, from sexual assault or wartime PTSD, can profoundly rewire a person’s memories, jumbling and even erasing them. Nameer’s narration is similarly fragmented. It drops out of order; recollections surface without prelude. Whole pieces are missing altogether. Who is he now? Where does he belong? He is a stranger even to himself: as Wadood writes in his manuscript, a man “who feels distant when he is close to home . . . his opinions are distrustful, all of him is strife, he is made up of ordeals, his secret is public knowledge, and fear is where he lives.” The text that makes up The Book of Collateral Damage, we learn, is Nameer’s attempt to write his way back to himself, a documentation project not so different from Wadood’s. But where Wadood’s manuscript presents the violence of war on a macro scale, a panoramic view of an entire country, Nameer’s project zooms all the way in to the destruction wrought on a single, shattered identity.

Wadood, still in Iraq, is an even starker example. The colloquies in the first part of the book are often profoundly moving; we watch as trees, scrolls, pieces of art that have survived for hundreds of years are destroyed in the invasion; as records or tape cassettes or photos holding the last traces of a person are incinerated by the flames. (That these colloquies are told in the first person adds an extra layer of poignancy; though often denied agency in Western culture, objects and animals have their stories too.) As the manuscript progresses, however, the excerpts grow increasingly jumbled and illogical, and it’s revealed that Wadood, who was imprisoned and tortured, suffers from severe PTSD and depression, as well as — it’s strongly implied — schizophrenia. Wadood, in other words, is just as much a casualty of war as any of his subjects: the difference between documenter and documented depends solely on where the bombs fall. One could even say the prophecy has been fulfilled. In the pages of Antoon’s book, Wadood is inseparable from his manuscript; they are one.

To read The Book of Collateral Damage in this way, as a work of autofiction, raises two vital questions. First, is Wadood based on a real person, whose story Antoon is attempting to memorialize? And if so, why does Antoon leave Wadood’s ultimate fate uncertain? The Book of Collateral Damage suggests there are but two options for men like Wadood and Nameer: flee your home and become a stranger to yourself, or remain, at the risk of losing everything. As such, the book concludes with not one, but two possible endings: one in which Wadood escapes Iraq for America and another in which he stays behind on al-Mutanabbi Street, to tragic ends. (One seems more likely than the other, at least if history is any indication.)

One could interpret this as a reminder to give the dead their due: to not cheapen their memory by imagining a different, more comfortable fate for them in our stories. As narrators, that is our responsibility. Yet for a book so obsessed with documentation, it almost feels like The Book of Collateral Damage is not entirely convinced of its own premise: that written records can be a remedy against erasure; that notation can help reclaim the stories of those we’ve lost. Paper is flammable, after all, and to count the dead would take a lifetime. With its deliberate non-denouement, The Book of Collateral Damage demonstrates nothing so much as the limits of the form: the uncertainty of memory, the unreliability of narrative. This is not to say that we should not strive to remember the lives and places destroyed by war. But perhaps a better solution would be to not destroy them in the first place.