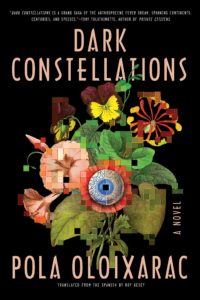 Tr. from the Spanish by Roy Kesey

Even before I arrived, I knew that the ants here were bigger than the mammals. I knew that the evolutionary advances of certain local species shouldn’t be compared to those in parts of the world restrained by the presence of gods and men. Here, nature displays its brutality plainly.

In the CBS drama Person of Interest, the future has already arrived. In the years following 9/11, the government built a vast surveillance system to predict and prevent acts of terror. The Machine, as it is known to the few people aware of its existence, is a keen student, observing the best and the worst of human nature — and eventually, at the end of the second season, it wakes up, culminating in a massive war with a rival artificial intelligence. Despite never assuming a physical form, these two AIs ultimately become the show’s two central characters, leaving the humans to scurry and react as the battle unfolds around them.

Fittingly for such a titanic struggle, Person of Interest frames the showdown between these two beings in mythological terms — a clash between god-like beings light years beyond human comprehension. In doing so, it makes a point that most narratives about artificial intelligence either don’t grasp or skirt around. Most pieces of pop culture use AI as a device to ponder what it means to be human: free will, morality, the ability to love. While Person of Interest asks these questions too, it also portrays the emergence of sentient AI as a story about evolution, the rise of a new form of life with powers we can hardly imagine. In the words of Vox critic Emily VanDerWerff, it’s a story about “what it means when humanity is no longer the dominant species on earth.”

Dark Constellations, a bracingly inventive and occasionally bewildering new novel by the Argentinian writer Pola Oloixarac, also involves the secret birth of a new technological species and the circuitous chain of events that leads to its arrival. It begins with the exploits of a European explorer named Niklas Bruun in 1882, ends with a covert DNA project in the hypersurveillance society of 2024, and stops over in the 1980s with a hacker who has hidden a dormant army of viruses across the internet, just waiting to be deployed — one of the many dark constellations of the title. These points in history are linked by Crissia pallida, a mysterious flower with extraordinary biological properties, and are written in the form of a Borges-like nonfictional report, authored by a mysterious group at some point in the future, complete with footnotes, photographs, and citations. (Of Bruun, they note matter-of-factly: “We have his brain.”)

This esoteric, centuries-spanning approach brings to mind David Mitchell’s Cloud Atlas and Darren Aronofsky’s 2006 film The Fountain, though Oloixarac’s novel is far stranger and more challenging than both. If anything, the book’s blend of futurism and natural science feels most kin to the freaky ecological sci-fi novels of Jeff VanderMeer, especially Annihilation, in which an outbreak of genetic mutations results in eerie doppelgangers and rampant symbiosis between plants and animals. VanderMeer’s famously difficult imagery never reveals the full extent of the changes, though Alex Garland’s 2018 film version envisions entirely new species: flowering bushes in the shape of humans and alligator-shark hybrids, among others.

Like Annihilation, Dark Constellations is preoccupied with DNA, mutations, and the porous boundary between technology and biology. The bulk of the novel revolves around a talented hacker named Cassio, whose life’s work is dedicated to constructing the ultimate computer virus: an army of invisible sleeper cells, embedded across “every interconnected object . . . every machine that humans use to interface.” These “troops,” as Cassio refers to them, are “infinitely malleable . . . each with its specific mutational capabilities,” thus capable of wreaking havoc in both the digital and biological realms.

So far, so sci-fi. But Oloixarac explicitly sets Cassio’s story within the mounting environmental crisis of the Anthropocene, interjecting the narrative with ominous glimpses of a world already in the grip of apocalypse. Cassio’s omnipresent viruses, the novel signals, are merely one part of an infection writ large — the digital counterpart to a dire natural emergency.

That night, an underwater cloud of jellyfish crossed the formidable mud banks of Rio de la Plata. This whirlpool of tentacles entered the viscous depths of the port of Buenos Aires in a display of destructive potential hidden beneath a lightning storm.

In Oloixarac’s hands, this world is one in which the boundaries between humans, plants, and animals have already begun to dissolve — metaphorically, and quite possibly literally. A sexual encounter is described as “reptilian;” a teenaged Cassio, spurned by a crush, loses trust “in the feminine branch of his species;” pregnant women wading in a public pool are described as “cretaceous amphibians,” while children splashing in the water are like “barracuda schools.”

And then there is the mysterious flower at the heart of the novel, Crissia pallida, a carnivorous plant whose appearance is like “a reorganization of human eyes — of the entire human face.” Discovered in the Canary Islands in the beginning of the novel by Niklas Bruun (he whose brain now belongs to the “authors” of this exceptionally strange account), Crissia is a particularly VanderMeer-esque creation. Its root is drawn upwards, “toward the light of the sun.” Its white, hooded flowers, like monks in prayer, “[defy] architectural norms by growing toward the ground, burrowing down through the air.” Above all, the plant exhibits a “strange rapport” with the insects it lures into its blossoms. Rather than eating them, it subjects them to “soundless but violent transformations, slight but fundamental changes,” forcing abrupt, brutal evolutions within its depths. Similarly, when Crissia’s spores are ingested by humans, they appear to fuse with their host’s genetic material, creating intense, disturbing hallucinations. Crissia, in other words, is a species that exists “outside the realm of all that we think of as real . . . the path of these plants runs between life and death; they aren’t of the world of the living, but it can’t be said that they have passed on.”

‘Neither living nor dead,’ of course, is also a working definition of artificial intelligence, and even technology in general — especially as our biological lives, via social media or iPhone thumbprint scanners, become ever more intertwined with our digital ones. In its final section, set in 2024, Dark Constellations takes this idea to its natural conclusion. By this point, a Ministry of Genetics has amassed an enormous repository of biometric civilian information, including fingerprints, face scans, exhumed brains, and other forms of DNA, which can be used to literally sniff out a person at any point with the help of a vast system of devices called Bionoses. Struggling to analyze “this massive flood of information,” the government has turned to a company called Stromatoliton, run by our old friend Cassio, which is on the verge of developing a new technology that will use this material to interpret and predict a citizen’s “trajectory” — i.e., their life.

It’s in these final pages that the relevance of Crissia pallida finally becomes clear, and the twin strands of biology and technology, genetics and culture, fuse into one. All things are connected, Oloixarac writes; “movements on the surface connect to movements in the depths.” Still, readers holding out for a eureka! moment may want to temper their expectations. From start to finish, Oloixarac’s prose, at times transcendent, is at other times impenetrable; one practically needs a machete to clear the way. (“A ground-skimming heir to tradition, he displays the innovative nature of those who excavate fundamental betrayals hidden amidst known feats of daring.” Sorry, what?) The narrative can be similarly inscrutable, especially in its hallucinatory closing stretch, which consists of a lengthy monologue delivered in a jungle palace by a six-foot-tall rat (yes, really) with “indisputably refined” manners and “perfect and derisive human speech.” It all ties back to that dark web of computer viruses and the end of the ecological world as we know it, though exactly how remains obscure.

I began this review by talking about Person of Interest, a show that depicted the evolutionary rise of new digital beings as the dawn of a new age of gods. Dark Constellations flips the script: its characters, the creators of new biotechnologies, see themselves as gods, or at least as having supplanted them. “God doesn’t know what we’re building,” one developer declares late in the novel, “because we’re its creators, not him . . . we live in an era so demon-possessed that all we can do is practice goodness and justice from a position of deep clandestinity.” But this is the great tragedy of the Anthropocene. Our confidence in our own infallibility has led us to the edge of a precipice; our quest for knowledge and innovation has resulted in the creation of technologies that may well render us obsolete. Nature will run its course. Whatever we tell ourselves, we’re still animals in the end, and as Oloixarac writes, “a species that can only relate to itself will over time create monstrosities that could lead to its extinction.” The exact nature of the future Dark Constellations envisions remains unclear. But what is clear is that it’s too late to turn back the clock. A vast, slow-motion catastrophe is already unfolding across the globe, and we, gods or no, are the architects of its design.