James M. Chesbro is a writer of deep and abiding empathy. Chesbro’s first book,  A Lion in the Snow (Woodhall Press), is a collection of essays imbued with love and meaning. Chesbro writes of the sleepless nights of fatherhood, and the consolations he takes in the fleeting beauties of our lives. This is a book about teaching and family, and the correspondences in time and meaning that return memories of Chesbro’s deceased father, same-named and years gone, but eternally on his mind. For those of us who know this kind of loss, we recognize in Chesbro’s writing the questions that linger long after our loved ones depart from this life. Chesbro finds in raising a family with the love of his life, and writing about it with a haunting kind of poetry, that he can to attend to the ghosts in our stories. 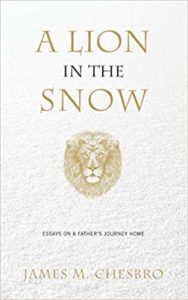 Andrew M. Davenport: Well, Jamie, the question needs to be asked: How do you do it? Three kids, a loving marriage, a full-time high school teaching job, and adjunct courses besides. How have you squirreled away time for yourself to think and write and edit? From my vantage point—late twenties, unmarried, heirless—the publication of this book in the midst of all the stressors and joys of your life looks to be a kind of superhuman effort. Did teaching and parenting arm you with the patience necessary for completing this project?

I became a father around the time when I began writing. The essay became a natural place for my curiosities and the constant unknowing that was so much a part of being a first-time father to a son and then to two daughters. As far as teaching goes, I particularly enjoy teaching the AP English Language and Composition course because the literary nonfiction we analyze always has something to teach me. I’m always working in new stuff I’ve read and in those ways the curriculum remains fresh.

Parenting and teaching fueled my writing insofar as they all make up how I’m wired. The hardest part for me is how to be all of them in the same day. Teaching and fathering are roles that demand attention and energy whether I’m up for it or not, of course. In order to have any semblance of functionality for writing I had to learn to accept when I can and cannot work.

I’m a morning person, so on the weekends I write before anyone else is up in our home. I write on a workbench in our unfinished basement next to the oil tank. That doesn’t sound very glamorous but when the white-noise of the furnace fan hums and the black coffee kicks in it feels good to be able to write and move the work forward. During the week I print out a draft of whatever I’m working on and attend to it in the small windows of time that present themselves. My most generative writing months take place in summer. I should mention here, I couldn’t do any writing without having a supportive wife who understands it’s something I have to do. She understands if I go too long without writing I get cranky and restless. Going away to a conference in the summer has proved really instrumental. It’s tough on my wife and kids, but devoting my full self to writing and thinking about writing for a week has been integral in revitalizing and renewing that part of me that writes. I’m grateful to Wesleyan University and The Virginia Quarterly Review conferences, respectively, for awarding me with scholarships the past two summers.

Would you describe for our readers the story behind your title, A Lion in the Snow? How does the title, and your essay from which it’s derived, relate to the vulnerabilities and anxious joys associated with expectant fatherhood?

One day when it was snowing, and my wife was pregnant I began imagining a male lion padding down our street. It was such an unprompted imagining, such an odd experience, I couldn’t ignore it. After many frustrating attempts on the page, eventually I became more honest with all the fears that fill the mind of expectant fathers. I knew I always wanted to be a dad, and of course I could conceptualize the role in my head, knew it to be life-changing and demanding, and yet I couldn’t believe how beautifully maddening it can be. It seems to me fatherhood is one stage after another of bewilderment. I liked the metaphor of the all-powerful male lion, lost, from another continent and the associations of his displacement. I liked how the daydream emerged as such an unbidden gift.

Your father has been gone for nearly twenty years. As you write, “He died before ever having an e-mail address, before text messages and touch-screen smartphones. He died before Starbucks seemed to be in every town. He died three weeks before the Twin Towers burned and fell.” You carry his name. So does your son, who never had the chance to meet his grandfather. What have the years spent thinking and writing about your father taught you about being a father and a man? 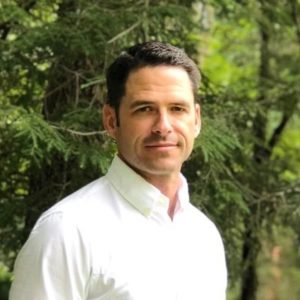 Like any relationship, the bond depends on stages, growth, and levels of maturity. As a grieving son, at first writing about him began as an exercise in continuing to get to know him from the vantage point of an adult. One of the most unexpected outcomes of becoming a father was how it made me think of my own father—which sounds like an obvious experience, but what I mean here is that I was surprised by how much I had suppressed my memories of him after his death that erupted inside me, instigated and brought on by ordinary experiences like watching my son play with a train, draw, go to the beach, eating out at a restaurant, mowing the lawn, or oddly enough, daydreaming about seeing a lion walking down my street in the snow.

In preparing this manuscript for publication as a collection, looking back on the experience, I think most of the personae want simply to befriend the spirit of their father, their memories of him and the man they knew him to be from the vantage point of a grown man with a family, rather than the naïve, young, unexperienced 24 year-old I was when he died. A Lion in the Snow dwells in those intersections of trespassing back and forth between grieving son and clueless-new-dad and all of it gave way to new understandings about myself and my father.

As far as what writing this book taught me about being a father: I’d have to say I’ve grown to appreciate how important it is to develop common interests with my kids. I write about this more in “In the Return of the Prodigal Father,” but in traveling down the paths that connected me back to my father, I’m more mindful and appreciative of how nourishing it can be, in the present, to create those pathways with my own children.

You’ve said A Lion in the Snow is the book you would have liked to have read in your early thirties. Someday your children will reach that age, and they’ll inevitably read your book. What do you hope they find within its covers?

I hope it makes them feel saner when they become parents. And I hope it comes across as the articulation of an authentic desire to father them well, and how often that desire isn’t enough, that ultimately, we are all fallible beings (especially as parents) trying to figure out our next move.

Perhaps it gives them a sense of their grandfather, too. My musings and memories about him are there for them to find when they’re older.

Which books and writers contributed to how you conceived and composed A Lion in the Snow? Now that you’ve written a book of essays, which collections do you find yourself recommending?

One of the first writers I encountered who was writing meaningful meditations of both his roles as a son and father was Scott Russell Sanders. Specifically, his memoir A Private History of Awe, and the essay collections Hunting for Hope, and Secrets of the Universe.

Steven Church’s Ultrasonic, and I haven’t gotten to his newest book yet, but am looking forward to reading I’m Just Getting to the Disturbing Part: On Work Fear, and Fatherhood. I also want to read Dustin Parsons’s new book, Exploded View: Essays on Fatherhood with Diagrams. BJ Hollars’s This is Only a Test. Ben George’s introduction to The Book of Dads is particularly good. Adam Gopnik’s Paris to the Moon, and Through the Children’s Gate. Of the many Brian Doyle books I like, I really enjoyed Leaping and Grace Notes. Anthony D’Aries’s The Language of Men. Michael Chabon’s Manhood for Amateurs. Jerald Walker’s Street Shadows. Famous Builder by Paul Lisicky. Christopher Buckley’s Losing Mum and Pop.

If we’re talking about sons writing about their fathers you have to include Bernard Cooper’s The Bill from My Father, and Gregory Wolff’s The Duke of Deception and Tobias Wolff’s This Boy’s Life.

Two books I’ve recently started that are definitely worth mentioning are Will Boast’s Epilogue and John Jeremiah Sullivan’s Blood Horse: Notes of a Sportswriter’s Son. As soon as this interview comes out I’m sure I’ll remember another one I wished I mentioned.

How were you introduced with your publisher, Woodhall Press? How has your relationship with the press influenced your opinions about small-press and indie publishing outlets?

Woodhall Press and I watched each other grow enough to be in a position to make this book together. I met Dave Legere, Colin Hosten, and Christopher Maddden in Fairfield’s MFA program. I liked and respected them as writers, but their innovation and hustle as editors won me over. I watched them come out with an anthology Flash Funny with Dinty Moore, and they ran out of those books to sell at AWP Tampa. Dave, in particular, offered to publish my book a few times, and eventually I came to my senses and realized the opportunity. Dave and Colin are both editors for other presses as well and as a group they have innovative ideas. They just released the novel, The Astronaut’s Son, by Tom Seigel, which is being well-received and they also recently became the publisher for The Fairfield Book Prize.

It seems to me the best thing a writer can hope for in the process of making a book is that their publisher is behind them. Yes, every writer wants that book deal, but once you have it, how are you treated? Woodhall gave me the attention I hoped to have with the bigger decisions, like the title, cover, and layout. As a first-time author, it felt great to be in their hands and to make decisions together. I really enjoyed working with them.

Andrew M. Davenport is an editor of Full Stop.