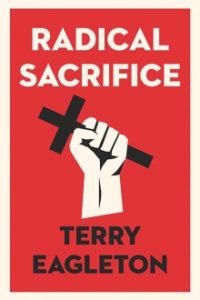 Terry Eagleton’s erudition, wit, and acumen has largely gone unquestioned over the past few decades, at least in the publishing world: since the mid-90s, a new Eagleton installment (sometimes two) has appeared each year under this or that major imprint, with many titles replicating the engaging, crash-course style of his wildly successful Literary Theory: An Introduction (1996). Marx (1997), The Idea of Culture (2000), On Evil (2010), How to Read Literature (2013), and most recently the Yale University Press trifecta of Culture (2016), Materialism (2017), and now Radical Sacrifice (2018), all take this tack. But that we, and evidently Eagleton himself, could comfortably expect a new Eagleton title every year since ’96 perhaps subtends the increasing dullness to the once-sharp edge of the genre last honed to a point twenty years ago. For me, at least, the latest installment of that genre just doesn’t cut it anymore.

The dust jacket claims that Radical Sacrifice “distils the essence of Eagleton’s later thought,” but at the outset it seems like that later thought is stuck in an era now long past. The book opens with the proclamation that it broods upon questions not commonly investigated by the political left, and certainly not by its postmodern wing. Love, death, suffering, sacrifice, evil, martyrdom, forgiveness and so on are not exactly modish preoccupations among cultural or political theorists today. They are more usually the concern of theologians; and if I myself do not take the dismissive attitude to theology generally to be found among left-wingers, this is because, through a quirk of upbringing, I happen to know a little bit about it.

That there is a “postmodern wing” to the political left in 2018 is news to me — maybe it’s a slur referring to those crazy kids who read too much Derrida, but that wouldn’t mitigate the datedness of Eagleton’s ill-defined but decidedly musty bête noire. Second, a two-second JSTOR search of the term “political theology” would reveal swaths of recent work exploring intersections of the religious and the radical, most of which (I’d wager) by political or cultural theorists who would locate themselves on the left. Third, the unnamed dogmatists so quick to dismiss theology render Eagleton’s enemy yet more maddeningly amorphous . . . Best I can make out (and this is just a guess based on his former work, as there’s no concrete indication as to who he’s talking about in Radical Sacrifice), this might be a reference to the fleeting stink kicked up by the “New Atheists” and their ilk — the Dawkinses and Hitchenses and Harrises who briefly mobilized a number of forum-dwelling, fedora’d trolls back in the late 2000s. If this is the case, then then as now, Eagleton is punching down to a feckless and rather uninteresting crew.

That he “happens to know a little bit” about theology — and “love, death, sacrifice, evil, martyrdom, forgiveness and so on” — is undeniable, and it is this bit that makes the book worth reading. Like his other brisk monographs, Radical Sacrifice excels in conveying an accessible and broad-ranging survey of its subject matter with style and verve, mapping the often-ignored channels through which Christian thought and radical politics (do/could/should) flow into one another. Once past the unmistakable Eagletonian panache and peculiar charm of the Marxist apologia as a genre, though, the reader’s caught wondering whether the book is arguing that Christianity is more radical than we give it credit for or the radicalism is more Christian than we are willing to admit. The vacillation between these two probably will give most readers enough juice to get through Radical Sacrifice’s not-quite 200 pages. But on the one hand, the fact that Christianity in its early days was animated by a revolutionary spirit shot through with political significance is a bit of a dead horse already well-beaten, and while the latter argument is more interesting, the book stops at simply affirming the intimacy of theological and political concepts and leaves us to wonder what such an intimacy might afford in theory or practice. The last sentence of the book is a case in point: “Seen in this light, revolution is a modern version of what the ancient world knew as sacrifice.” In more senses than one, that’s all we get.

Though Radical Sacrifice is a book in which what eternal life may entail is described as an “issue” that “continues to rankle” and the sentence “an expenditure which anticipates no return is the most profusely rewarded” is, in all seriousness, actually written, I hate to sound like this review is all about beating up on this book or its author for two reasons. One is that Terry Eagleton occupies a crucial position as a thinker straddling academic and popular spheres — one that intrigued a younger me and helped attract me to humanist scholarship — and throughout his career Eagleton has made valiant efforts at redistributing the wealth many others prefer to hoard in the ivory tower. The book may be much too heavily salted with paraphrase and peppered with name-drops (in one paragraph he cites J.K. Rowling, two Shakespeare plays, Sophocles, Racine, Büchner, Ibsen, Eugene O’Neill, Freud, Rilke, Lacan, John Ford, Johannes Rosmer, Rebekka West, Wagner, Tolstoy, Joyce, T.S. Eliot, Samuel Richardson, two Arthur Miller plays, and uses the phrase “from Goethe to Dickens”), but all that seasoning may after all be part of the admirable effort initiated in Literary Theory to acclimate a diverse range of palates to the richness of the western canon.

The second reason is that one of the more unattractive elements of Eagleton’s writing, and one that I hope to avoid replicating in my own work, is his proclivity for the summary dismissal of those he disagrees with. Aside from his truly powerful critiques of René Girard’s conception of the scapegoat and Derrida’s approach to gift-giving — which unfortunately are the only two in-depth, sustained engagements with single interlocutors to be found in Radical Sacrifice — the book prefers to shoo away its would-be detractors with a couple sentences or, at times, a joke. In this it distinctly reminds me of Eagleton’s tellingly titled 2003 memoir, The Gatekeeper, in which the love of a phrase well turned often takes the place of solid content and after a bit under 200 pages you walk away more dazzled by wit rather than sated by substance.

The ability to dismiss entire bodies of work in a single clause is not “uncompromising” or “brave” (as John Milbank describes the book in blurbs on the front and back cover, respectively), and cramming dozens of references to classic works of western literature does not reflect, as Scott Beauchamp writes, “the ease with which Eagleton wears his learning” — it just comes off as lazy. Eagleton is a vastly more profound thinker and critic than what the past decade’s yearly offerings demonstrate, and the most recent of them is yet more slight evidence of the true depth of his abilities.

Warhol’s Mother’s Pantry: Art, America, and the Mom in Pop – M. I. Devine