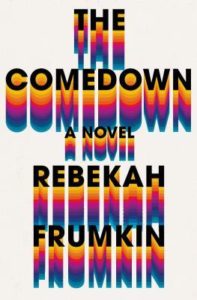 Two gnarled, adjacent family trees printed in the flyleaf of Rebekah Frumkin’s The Comedown serve to weed out the warier of would-be travelers. The webbed pedigree charts indicate short, brutal lives marked by unfaithfulness and deception, generations worth of deadbeats and philanderers. Bloodlines reduced to dates and grids, they are composed of people with silly names and frivolous existences, men and women who choose selfishness and self-centeredness despite the obvious repercussions on their extended relations.

A multigenerational midwestern saga with an omniscient narrator pivoting among characters on a chapterly basis, Frumkin’s debut may find itself sharing shelf space with Franzen and Chabon. Yet The Comedown’s panoramic shots of addiction, trauma, mental illness, and suicide are hardly well-trod territory. Where many of these sweeping ancestral chronicles are more than happy to bog themselves down in bulk and detail, Frumkin encompasses some seventy years and dozens of characters in just over 300 pages, breezily leaping between decades and perspectives, the only real through-line a murky plot device following a suitcase full of drug money to which both families feel entitled.

Although of two worlds in many senses, the Jewish Bloom-Mittwoches and African-American Marshalls share a city, Cleveland, and a streak of compulsions which entangle them briefly in its criminal underworld. And while a 1973 drug heist serves as the centripetal moment upon which the narrative orbits, the saga stretches back as far as the 1940s, tracking pivotal events in each character’s life and comprising a veritable postwar mosaic. The lives rendered in each chapter are self-contained only to the point where each character proves ultimately incapable of escaping whichever ancestral bondage is his birthright.

With a tapestry which brings to mind a nineteenth-century naturalist novel, The Comedown supplies a dozen hypotheses on how children become their eventual adult selves, isolating the inputs which produce divergence among even siblings and spouses. Frumkin’s brisk pacing alights on the episodes — in school, in temple, in hospital wards and illicit lovers’ beds — which define lives and families. “It was funny,” considers young Diedre Bloom-Mittwoch looking back at a failed relationship, “how two very similar people could start out in the same shitty place and one could end up so much better than the other.” Revelations occur during ruminations before the television set and conversations conducted in adjacent car seats, all parties’ eyes facing the uncertain road before them.

As The Comedown documents the trials, both unique and universal, facing each generation of Marshalls and Bloom-Mittwoches, it makes for a convincing cross-section of American trauma and coping. Frumkin portrays addicts unsparingly and sympathetically, their mistreatment of others presented alongside the myriad ways they’ve been wronged themselves. From dorm room potheads to overprescribed board room execs to skid row coke fiends, they’re seemingly functional until the moment they’re not, regardless of how acceptable society labels their specific vices of choice. The luridness which imbues both families’ trying domestic scenes only rarely overlaps with actual malice.

Bloom-Mittwoch patriarch Leland Sr. is a manic romantic and lifelong addict governed by a heedless fatalism which ruins his first marriage:

He slammed the fridge closed and turned to face her. “You want my son”—he used his entire hand, palm up, to gesture to the boy—“to grow up to be the kind of guy who has to go talk to some fat old faggot about his problems because he can’t handle them himself?” He’d matched his son’s decibel level and then quickly exceeded it. “You told me to try it, I tried it, it didn’t work. Enough!”

Needless to say his impulsive rants haunt his son Leland Jr. long after his seedy Gulf Coast suicide. And his sycophantic relationship with his resigned dealer Reggie Marshall makes for poignant commentary on the relationship of users and their ambivalent enablers. Through the clamorous ups and downs of Leland Sr.’s chemically-induced life the reader appreciates a tactile shift in acceptance of the varying methods and levels of his habit. Where getting high was a source of glamor among his set of ‘60s campus radicals, it’s anything but as he abandons his son, tearing through the bowels of Cleveland at the height of withdrawal searching for his dealer. “When the fight and his paranoia had escalated,” recalls Diedre, his second wife, “she remembered thinking that all of her friends had known when to stop partying.”

Deftly skirting the borders of angsty generational criticism, The Comedown speculates on the manifold ways parents manage to screw up kids. Among the novel’s elders are criminals, brawlers, runaways, body-shamers, malignant racists, apathetic ignoramuses, and imbalanced cutthroats in addition to your garden variety addicts. Most heartbreaking of all are the few parents who actually are compassionate and well-meaning, yet equally helpless in the face of their children’s struggles. For all the havoc wrought by their parents, it’s practically a miracle how well-adapted most of the progeny seem, but this too is its own facade — the children adapt and act out in ways both reminiscent of and foreign to their bewildered folks.

The most finely wrought among Frumkin’s ensemble cast is Aaron Marshall, Reggie’s fiercely loyal son who spends his adolescence overburdened by his unmoored mother, Tasha, and wimpy twin brother Caleb. Aaron is sensible beyond his years but jealous and wary of the figures who’ve disappointed him, and his chapter exhibits The Comedown’s most precise writing, efficiently staking the territories of allegiance and antipathy in childhood and brotherhood. Despite — or perhaps because of — his receiving the roughest hand of the novel’s misfortunates, an unemotional pragmatism is all he can afford. “Fuck if the world was going to make him hang himself,” he vows while analyzing the ravage of death in his own family. “It sure as hell was giving him the rope, though.”

The Comedown has all the makings of a serious downer, opening with a suicide and containing multiple failed attempts therein. The sex is depraved, the drugs are ubiquitous, and the violence veers into absurdism. There are chapters devoted to manic depression, assault, gender identity, police brutality, and cults. Piloted by a heavier, more self-serious hand The Comedown would be a tragic history of modern American misery, where a lighter touch might have resulted in an afterschool special. Counteracting the content with an amiable tone is perhaps the greatest of the challenges posed by Frumkin’s dire, coiling narrative, and it is accordingly her greatest feat. She is able to simultaneously love, denounce, and lampoon her deeply troubled characters, extracting shreds of wistful humanity from even the most harrowing scenes. Taken together, the dozen coming-of-age tales start to coalesce as a madcap comedy, but there are no cheap laughs.

The Great Midwestern Novels which provide The Comedown’s most immediate reference points remain impressive in their postmodern ambition, their multigenerational heft, and their frank looks at depressed people in depressed places. Yet Franzen and Chabon’s difficulties stabilizing tone with narrative just as frequently mire their tomes in glorified navel-gazing. Their hyperarticulate dialogue and inexplicable whimsy clash with their identifiable types and settings; they write people of color as if they’ve only encountered them in Morgan Freeman films.

While a few of The Comedown’s characters exhibit a saccharine quaintness ostensibly ill-suited for their desperation, the sprightly pacing means their deep backgrounds are executed in brief snapshots, and Frumkin manages to sympathize with them without needing to occupy them herself. Frequently, this buoyant tone approximates a tangibly midwestern pragmatism mirrored by the characters themselves. When the protagonists resort to humor and tongue-in-cheek optimism, it’s not to disclaim their neuroses so much as a flailing effort to keep from drowning beneath them.

Frumkin’s race writing in The Comedown is perceptive and modulated. Both the Jewish and black families are recognizable yet atypical, and the intersection of white guilt with sexual fulfillment makes for some of the book’s most compelling, if delicate, passages. After Reggie’s disappearance, Leland Sr. takes it upon himself to look after his family but ends up conducting a tawdry affair with Reggie’s wife Tasha. One of the sharpest chapters follows Jocelyn Woodward, Leland Sr.’s daughter-in-law, and the evolution of an immobilizing white female complex. After losing her virginity to a mixed-race co-ed at her New England prep school, she’s governed by a lifelong infatuation with black men which manifests itself in shame as frequently as in aggrandizement. Her unspoken privilege informs a vague sense of duty which more often than not proves destructive, culminating in an ill-advised affair with Caleb Marshall.

“He was, essentially, responding to a distress call from a bunch of rich white people,” Caleb considers upon finding himself in bed with Jocelyn. “Mom would call these his reparations. He took them over and over again, from every crevice Jocelyn made available to him, took them until she was sweating and laughing, laid up on her back looking up at him, saying could he please just give her five minutes in the bathroom to tidy up, she’d honestly never gone that long before.” Unbeknownst to either of them is the depth of the reparations — racial, material, and sexual — between their families.

As the narrative surges forward the second- and third-generation characters have seemingly less relevance to the overarching plot, but lest it spin out of control the final two chapters, set in present day, are standalone triumphs. The chapter which follows Tarzan, a friend of Leland Sr.’s youngest son Lee, contains a high school bullying scene which is the book’s masterstroke. The following chapter, chronicling the childhood and American education of Lee’s girlfriend Maria, an emotionally sensitive savant, is magnificent. These episodes, which might easily have been extraneous, comprise a dramatic climax seventy years in the making, and Frumkin’s attunement to the nuances of suffering and rebirth make for a profoundly rewarding final act.

Watching the Marshall and Bloom-Mittwoch clans stagger into the twenty-first century, the characters’ individual comedowns — dark nights of the soul in rehab, psych wards, and seedy motel rooms — adhere into what might be termed something of a societal comedown, although it’s impossible to identify a fall from grace among even the most starry-eyed of the ancestors. The concept of the American Dream becomes laughable given the lifelong struggles these educated, well-meaning midwesterners face in becoming even passably functional.

The Comedown’s non-chronological narrative can make for rough going early on, but as Frumkin leaves no heartstring untugged, it makes the exposition suspenseful in itself. If it’s a trick, it’s a brilliant and thrilling one, with each pivot and retread diligently plotted. Beholding the generations of lovable, near irredeemable Marshalls and Bloom-Mittwoches, one wonders indeed how far back we might trace the sources of a family’s anxieties, the original sins of the original fathers, a neurotic first mover. The Comedown is a romp which never loses track of its compassion, messy in a charismatic, lifelike way, a giant, leaping wash of twentieth and twenty-first century Americana which never lapses into cliche. Frumkin’s characters linger long after the final page, such that finishing the book is a comedown of its own.