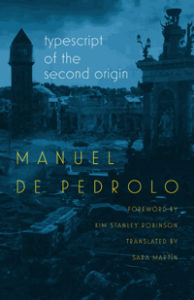 The literary output of Manuel de Pedrolo (1918–1990) was, in essence, an act of resistance. Born to an “impoverished aristocratic landowner” in the village of L’Aranyó (eastern Catalonia), he was studying in Barcelona at the age of 17 to become a doctor when the Spanish Civil War erupted. After serving as a medic for the Republicans, it was only his father’s connections that kept him out of prison when Franco’s forces emerged victorious in 1939. As Franco’s dictatorial regime forbade the use of the Catalan language in education, public discourse, and mass media, Pedrolo was part of a generation of writers who took up the pen to ensure the language not only survived, but flowered.

In an effort to provide material which reached as many readers as possible, his work extended into translation and curation, while his authorship broadened across genres and mediums: both fiction and non-fiction, books, journalism, and political columns. Based on the strength of a 1954 detective novel (mouthwateringly titled Es Vessa Una Sang Fácil or “Blood Easily Spilling”), he was tapped by a company named Edicions 62 to run an imprint for detective fiction, where he published translated works by Chandler and Simenon alongside those of local authors and his own.

Typescript of the Second Origin (1974) is one of his many works of science fiction, which are inevitably cast in shades of political allegory. This compact book was originally published by an imprint catering to what we would now call the YA market, and its overwhelming success — it remains the best-selling work of fiction in Catalan — was something of a sore spot for an author whose works were varied, and (at times) hugely ambitious. It was, perhaps, as if Frank Herbert had accidentally written The Hunger Games.

When Spain transitioned to a parliamentary democracy after Franco’s death the following year, the restrictions against Catalan were lifted, and Typescript was subsequently enshrined as a work assigned to year after year of students educated in this language. Owing to a variety of factors (both literary and political), Pedrolo was met with indifference by Catalonia’s academic community in the later part of the 20th century — though it appears a new generation is beginning to re-evaluate his work. In her introduction, the translator Sara Martín notes that this book, first encountered in school, always stuck with her.

The plot concerns Alba, “an olive-skinned fourteen-year-old virgin” who saves the life of a nine-year-old black boy named Dídac, who was beaten up and thrown in a lake, unconscious. While they are underwater, a fleet of flying saucers instantaneously kills the Earth’s mammals and razes its cities with a vibration weapon.

Resolute, Alba leads Dídac into the forest, and into shaping an egalitarian society from the rubble. The relationship between the two is explicitly matriarchal; she raises and educates the boy in expectation that they will eventually reseed the human race. The book’s formatting and tone take biblical cues: each chapter represents a year, and is divided into numbered sections, each a few paragraphs long.

While discussing their racial differences, Alba instructs, “We’re the last white and the last black, Dídac. After us, people will no longer think about their skin color.” Scrounging for material at a gas station, she takes “plenty of blank paper and two pens that were lying on the table. She left the coins and bills untouched, for in her new world, money no longer had any value.”

Later: they farm, fix cars and boats, drive and sail, scavenge items from the ruined cities, kill an alien, grow up, become lovers. Whatever — it’s fine. The book’s provenance is, frankly, more interesting than the book itself. The translation errs on the side of simplifying the original Catalan’s twisty, antiquated syntax, rendering it suitable for a younger readership, but slightly dull, linguistically. The final chapter is a metatextual epigraph which frames the preceding material from the perspective of an academic some 7,000 years in the future.

For modern American readers, Typescript might serve interchangeably with Z For Zachariah, another allegorical teenage-girl-survives-the-apocalypse novel from the mid-70s which many of us (myself included) were assigned to read in school. Or one of the dozens of recent politically-inflected post-apocalyptic YA novels with female protagonists available in any-and-all flavors of ideology.

The apocalypse as a narrative setting has been a hit with readers since our foundational texts were first chiseled into stone. It gained fresh currency in the nuclear age, as we finally rendered our own existence erasable. As Franco’s regime sought to control Catalonia by silencing its language, Pedrolo delivered an apocalypse where two teenagers brave the collapsed libraries of Barcelona to preserve as many volumes as they can. In an era where a married woman was prohibited from holding a job or owning property without her husband’s permission, both contraception and abortion were illegal, and the supreme court held that a rape victim was required to show “‘heroic resistance’ in order to prove that she had not enticed the rapist,” Pedrolo gave us a world where a young woman takes control of restarting the human race and sets out to form a new society where “there cannot be any injustice.”

Apocalyptic fiction’s present appeal seems relevant to how we “people of the future” (as described by Toffler in Future Shock, just a few years prior to Typescript) are currently experiencing the breakdown and amorphism of institutional structures: we are born to a world where transience is not only expected, but celebrated. Wholesale, apocalyptic dismantlement of extant systems is no longer a matter of allegorical fiction, but now a feature of modern life. And women, prepared by generations of navigating oppression and violence, are rising to navigate this new reality. In a recent interview, gold medalist and gymnast advocate Shannon Miller looks directly into the camera and keeps her tone even: “sometimes you have to burn the field to plant anew.”