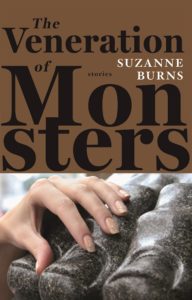 Suzanne Burns’ The Veneration of Monsters is a story collection that truly demands a recipe supplement (This reader, for one, is dying to hear from that pineapple-enhanced zucchini bread again!), and if one were to guess at the recipe behind the fiction itself, it would undoubtedly include:

a fantasy corresponding to an unfulfilled affective need,

a generous dose of humor,

a death (or the undead)

And this all would probably be combined by spike heel in a cherry red bowl the size of a kiddie pool.

And yet, such reverse-engineering does not account for one vital element, and that is the masterful hand of the author — in particular, Burns’ ability to represent and preserve profound and consequential ambiguities, inviting readers into a troubled, liminal space between extremes.

The stories are set along the imprecise and moveable boundary between fact and fantasy, reality and role-play, where characters alternately wield and fall prey to the seductive power of myth — most notably, that of idealized heteronormative love. From couples newly wed and firmly established, to internet matches, fourth dates, and single women in pursuit of a remote, romantic ideal; this collection is a multivalent examination of appetites direly, systemically, unfulfilled.

Physical appetite — i.e. hunger — is a central theme of Burns’ work, where food often takes on the function of a social interface, a symbolic locus of power wherein control is currency. There are more desserts named in this collection than there are stories, and Burns’ characters often harbor a complex or conflicted relationship with food. One cannot fail, in reading this collection, to notice just how much food there is, and just how many ways food comes to mean. A woman in a pink sweater looks like “toned cotton candy,” a restaurant is distilled to “a place that serve[s] chicken tenders.” Burns’ prose is at its most perceptive when food enters the frame: “the Morton salt girl’s wet umbrella spreading a dampness where Himalayan mineral salt once settled like an overpriced sunset.”

But food also represents a great deal to Burns’ characters. Whether it’s thirty-something single women musing about the breakfast they might share with a lover, should they ever succeed in bringing one home (Bloody Marys, omelets with corn); or morning-after glee epitomized in the image of a lover cooking pancakes (the vampire special, by the way, is red velvet); food occupies a prominent position in the mental landscape of these characters. Quite clearly, we can see the id in the hands of the super-ego here: characters’ dreams feature “all-you-can-eat spaghetti buffets” right alongside “wearing a bikini without shame.”

While food — and the desires and pleasures associated with food — are closely tied to shame throughout the collection, and several of the aforementioned desserts end up in the trash, one story explicitly raises the subject of disordered eating. In “Reducing,” a woman who has not eaten for two days in advance of a date can’t stop thinking about food — her thoughts wavering between the desire to consume (“popcorn off the dirty floor,” “hot turkey sandwiches piled in mashed potato fluff,” “lasagna . . . layered with full-fat cheese,” or simply “a normal dinner without hating herself”) and the opposing desire to conquer and repress her body’s craving. Contemplating her reflection in a diner bathroom, she observes that “her jeans rested low on her straight hips. Almost the way jeans fit an adolescent boy,” and wonders: “Maybe there was a sort of power in looking like a boy with soft lips?”

The collection’s opening story, “The First Movement,” is very much in conversation with “Reducing,” as its protagonist’s attempt at radical self-transformation begins at the mouth. The lovelorn 36-year-old, Cherise, visits a candy store and selects the most unique (i.e. least liked) hard candy, which tastes like “the alarming realization that she had accidentally swallowed perfume.” Under the belief that the uniqueness of this act will somehow summon love, she forces herself to eat several. In this way, Cherise’s consumption of sweets marks a convergence between her compulsive self-harm (the titular “first movement” refers to her habit of splitting her own lip each morning) and ritual self-abnegation in service of the romantic ideal: Cherise’s quest for a man, but not just any man: the man, “the man who would call her mouth a symphony.”

While the author’s penchant for peculiar characters, bizarre compulsions, hand amputations, and baked goods is still greatly in evidence, she has dialed back the carnivelesque which characterized her 2009 collection, Misfits and Other Heroes. In The Veneration of Monsters, the monsters emerge from the least-likely candidates: the cat lady, the suburban housewife, the librarian, the vacationing married couple. In other words, this is Burns exploring a more everyday strange. Fans of Burns’ earlier work will appreciate the extent to which the fictional imaginary preys upon the fictional “real” in these stories.

The universe of these stories is one we recognize instantly: peppered with pop culture references — Miley Cyrus, Kim and Kanye, Oprah, Carrot Top and Anderson Cooper (multiple cameos) — it is undeniably our own. This reality effect is further assisted by the fact that Burns’ protagonists are themselves steeped in fiction, drawing comparisons between their own experience and experience as represented in books, fairy tales, TV and film — from The Twilight Zone to the Twilight series. One marvelous instance of this is when the goth blogger in “Selfie” spends a day with her actual-vampire lover watching and commenting upon vampire films.

Given the collection’s domestic realist foundation, one can read the incursion of the supernatural into the natural as either genuine magic or as a manifestation of inner experience — i.e. consequences of a particular psychology. For instance, as Cherise’s story progresses, we see man of her dreams becoming an ever more literal concept, as Cherise begins to formulate a clearer and clearer picture of her man, until he is no longer an abstract, but rather a specific man, “John,” with a specific profile and backstory, and even (she fleetingly believes) a specific location in space. In other words, “The First Movement” tracks the progression by which the imagined can be projected onto the world, or dreams can take on the quality of delusions. This dynamic interplay between the uncanny and the everyday calls to mind the work of Franz Kafka and Clarice Lispector, as well as that of contemporary practitioners of magical realism, such as Kelly Link, whose Get in Trouble (2015) is perhaps this collection’s closest analog.

Because Burns’ fiction is layered like a mille-feuille, it comes as no surprise that a character first introduced in Misfits and Other Heroes makes another appearance in these pages. Like a “Where are they now?” special, we check in with the 18-inch-tall “Tiny Ron” and his unnamed wife/social media manager at a later phase of their relationship, with the husband at the peak of his celebrity and the wife at her most invisible:

I am always there, buying his favorite olives, tugging out the slippery pimento . . . I’m there to book his speaking gigs and cut the shortest pair of shoelaces in half and renegotiate his endorsement deals and shield him from overzealous fans who might accidentally crush him in their ardor . . . But I’m sure he still doesn’t see me.

While the single-but-searching women in this collection — like Cherise or the “witch” in “Just the Right Kind of Stranger” — are tragic characters, hyperbolic in their desperation and oddball naivety — women in relationships are by no means immune to Emma Bovary syndrome. Marriage in particular is rendered as a condition of slow-simmering resentment and lack of recognition. “Maybe that’s what love is,” Tiny Ron’s wife reflects, “existing behind the scenes of another person’s life.”

In “Happy Anniversary,” a husband initiates a game in which he and his wife of ten years pretend to be complete strangers. “My darling still can’t accept that one should never try turning myths into reality,” the wife teases. Predictably, this warning goes unheeded. In a classic iteration of a be careful what you wish for fable, the wife reveals herself to be not only willing but also ominously capable of playing along, and the husband’s arousal is soon lost to distress: “If Rose, nee Emma, could already, in the course of two hours, lie without blinking the messy caterpillars of her smudged mascara, didn’t that mean she was a pro at deception?” If this game has a winner, it is most definitely the wife; her frank participation forces the husband to see what he has not been seeing all along: his demure, sensible, flat-shoe-wearing wife, “a woman he sometimes forgot to kiss goodnight, a woman known for how she cooked chicken.”

In “Unwound,” the protagonist seems to have internalized the assumption that marriage is an inherently doomed endeavor:

This fear — that reality always, ultimately, pales in comparison to fantasy — motivates Lara to re-create the classic campfire tale, “The Girl with the Green Ribbon,” with the help of her more-or-less disposed partner, Thaddeus. “The idea that someday, somewhere, I will meet a man who will risk my life just so he can see me fully exposed is my go-to fantasy,” Lara explains. Just as with the couple in “Happy Anniversary,” the trouble here beings when the line between fantasy and reality begins to blur. “If Thaddeus tore the ribbon from her neck, her head would stay securely attached . . . She knew this the way she knew what she looked like before any obsessive examination in her bathroom mirror. Still . . . she felt a little scared.” In a moment that is emblematic of Burns’ deft and subtle treatment of taboo sexuality throughout the collection, the illusion finally — and violently — collapses. Lara has obtained precisely what she claimed to desire, and yet her emotions are anything but clear:

Thaddeus stared at Lara like he wanted to strangle her with her own ribbon, his tender arms a flexing series of aggression. She could smell his warm body, the oily leftover salmon that would not rinse off his hands after dinner. His pupils narrowed to pinpricks of black in the celestial blue of his eyes. She had never guessed a baby-faced man with blue eyes the color of an antique glass bottle could make all the hairs on her body stand up from her skin.

Is our protagonist moved by passion, or fear? Like all of the stories in this collection, “Unwound” blurs boundaries to the point of breaking them, and in this way sheds light on repressive binaries that serve to isolate us, in- and outside of relationships; and alienate us from our needs, our hungers, and our bodies. With originality, humor, and sharp craft, The Veneration of Monsters draws a clean slice through collectively-held ideals around romance, sexuality, and femininity; exposing destructive fantasies in all their many layers.

Emily Alex is the prose editor at Puerto del Sol and a prose editor with Noemi Press. She teaches creative writing and composition at New Mexico State University, where she is an MFA candidate in fiction. Her writing has appeared in The Offing, and is forthcoming in Denver Quarterly and The Collagist.

As You Were – David Tromblay