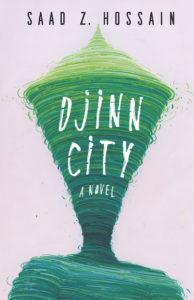 There have been a number of recent novels like John Banville’s The Infinities that have described familiar but fantastic universes, where deities are burdened with earthly qualities and intimately coexist with mortals. Saad Z. Hossain’s Djinn City is another spirited entry into this tradition. In his second work of fiction, the Bangladeshi writer blends the elements of political intrigue, bildungsroman, and science fiction into a dizzying adventure novel. He adapts Arabian mythology to trace the historical origins of an interracial conflict between man and djinn. The result is an inventive but shallow piece of entertainment.

The novel begins with a crisis in one of the formerly revered families in Bangladesh. Indelbed, our protagonist, is innocent, forgiving, and credulous, all the more miraculous considering how much he has already been pummeled by misfortune. He is the victim of a negligent, occasionally abusive father, motherlessness (his mother died in childbirth and his father blames him for the death), alienation by his relatives, and indigence (he and his father survive primarily on their meager inheritance). The disgraced Dr. Kaikobad inexplicably falls into a coma and abandons his only son. In the following panic, Indelbed and his sympathetic cousin Rais discover that his father was appointed as an emissary to the djinn world, that his mother was a pureblooded djinn, and that he is a rare interspecies hybrid targeted as the prize in a djinn hunt and therefore in mortal danger. His mostly apathetic relatives allow a suspicious colleague of his father’s to ferry the child straight into a hostile djinn’s trap. Indelbed disappears from the human realm and the novel uprights itself to sprint along three parallel arcs — the first following Indelbed in his captivity, the second describing Rais and his attempt to become Kaikobad’s successor, and the third focusing on Kaikobad, also confined to an alternate dimension, where he witnesses ancient historical scenes from the first djinn city.

Hossain’s greatest triumph is in his storytelling. He resists creation of an overly polarized battle between good and evil. The Djinn world has been divided into two major camps regarding the origins of its race. The arch-conservative faction doggedly believes in a creationist beginning. It asserts the race’s innate superiority and has implemented measures for human genocide as a form of population control. The moderate camp has evidence for the evolutionary development of djinns and advocates for the continued peaceful coexistence with the human race. The existence of viable hybrids, in Indelbed and in a previously suppressed historical record, begins to refute the creationist theory. The novel’s intricately constructed frame is this war between dogma and historical truth to either justify or debunk the ideological underpinnings of racial hierarchy.

However, the frame becomes more a clever means for the author to unite his three arcs into narrative coherence than an occasion for profound meditation on racialized societies and their erasure and misappropriation of history. The novel often seems like a missed opportunity because it is largely unambitious and content to merely entertain. The content never really aspires to the artfulness of its framework.

Befitting the adventure novel genre, this is a busy, breezy, plot-driven book, trafficking with a dozen characters and travelling at a rapid forward velocity. It often places years, if not centuries of time, under heavy compression. The plotting is dense with briskly decided events. Dialogue is chatty, sometimes fatuous, and points outward toward matters of survival, the acquirement of power, or clarification of the metaphysical rules of the djinn world. Hossain’s prose is usually utilitarian but sometimes sags under the weight of hackneyed phrases and overdressed images: “The grip tightened inexorably around Indelbed’s neck, making his blood pound in his ears. Up close, he noted with the horror the needlelike rows of teeth crowding the djinn’s mouth.” The author prefers the breathless exposition of events to pausing and meditating on the consequences of those events to his primary characters. As a result, the book sometimes seems too expedient, as if it had consumed all its energies for the advancement of story and became too enervated to handle the more delicate matters, such as those of intricacies of character and psychological depth.

It is true that a predilection for story over psychology is largely a matter of style, but Hossain’s protagonists are overwhelmingly shallow. Their emotions are simplistic, unicolor, never diluted by shades of ambivalence. They feel either love or hatred but nothing in between. Characters are either murderous or devoted toward those around them, and are often in danger of becoming suffocated by a rambling and hysteric plot. Emotions of longing seem rented, obligatory, and ventriloquized through characters rather than profoundly felt. In one instance, while Indelbed remains in captivity and masters his djinn powers with another prisoner, he starts to worry over the loss of his father. Hossain actually parenthesizes this swelling of emotion:

Indelbed imagined the distortion field as a lattice of molecules around him. He could put up a few points like tent pegs, but his concentration inevitably failed and the whole thing collapsed in sparks. (It reminded him of his dad teaching him algebra at age six, the sheer impossibility of it, the unexpected patience Kaikobad had shown, and this made him weepy and miss the Doctor, and wonder, as he always did, whether he had ever woken up from his coma, whether he remembered he had a son and was out looking for him somewhere. It was always a comforting fiction, that someone outside still loved him.)

The passage is slightly trivialized by the fact of it being parenthesized but nevertheless, aggressively seeks to wring pathos from the situation. Here, Indelbed’s sadness regarding the dissolution of the bonds of family has been assumed rather than actually portrayed. His hope that “someone outside still loved him” also has a quality of triteness. Much of the effect seems artificial, lobbied for rather than earned, because it depends entirely on memories that are completely incongruous with reality and that are overly idyllic.

Hossain subjects his characters to a world characterized by an unsettling sense of lawlessness. Especially towards its conclusion, the novel gloomily delights in the gratuitous dealing out of suffering. Acts of wickedness, like murder and betrayal, are not punished but rewarded. Physical strength and political connectedness are the primary determinants of survival. Subterfuge and deceit are the only other viable alternatives. Indelbed’s development is one of the securing of djinn power at the cost of both his human likeness and his moral center. His family patriarch, his grand-uncle, is willing to sacrifice his nephew’s life to a threating djinn for the protection of his vast financial holdings. Hossain’s only discernible philosophical ethics, common to the fantasy novel, is that everything has a price, that power corrupts the soul and displaces a sense of morality.

The novel concludes with scenes of death and more anomie. Intimate bonds are frayed and the innocent are demonized. The humans are shown to be just as fickle, self-interested, and cruel as their djinn counterparts. The djinns admit to their tenuous bonds and lack of feeling in their associations with each other. At one point, Indelbed’s djinn mentor compares the essential social structures of the two races: “I mean, we are fundamentally different. We aren’t pack animals like you. I suspect we were solitary hunters in an evolutionary sense. It makes a huge difference, you know. Society for us is a burden, a continuous series of transactions. You see, we don’t have families or tribes.” The novel has been interested in collapsing the assumptions regarding the intrinsic goodness of humankind when compared to the brutishness of the djinn race. The apocalyptic ending acts as a final dissolution of this fundamental difference between human and djinn — the two races are revealed to have descended from the same stock, and both finally recognize the inhumanity in each other.

The novel’s problem is not one of sentimentality — the book can be brutal, punitive, and even unjust toward its principal heroes. It is that too often there is a whiff of authorial impatience behind character building and as a result, the characters remain caricatures lacking subtlety and compelled to perform typecast emotions. The novel falters on the promise of its original plotting by resorting to cursorily drawn characters, prose that is often simply convenient or overreaching for poetry, and an unjustifiably cruel world. The book is rather like a gorgeously painted house with a hastily furnished interior. Hossain has committed himself to the creation of a thrilling adventure novel and he has succeeded in that ambition. However, the reader comes away wishing that the author might have looked further upward, been more unsparing with archetypes, and left us with something more.