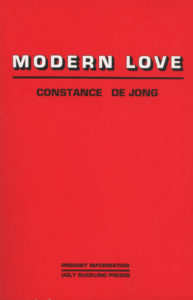 New York isn’t the tourist trap. Rather, it’s the idea of New York. How many dreadfully dull “acclaimed” novels published in the last half-decade continue to promulgate the notion that New York is an image of the whole world? And it doesn’t matter which New York. The glammed-out, rotting New York of the 70’s. The New York gallery world of the 80’s, the lacerating handsomeness of its austerity spotlit by cocaine. The sleaze and wack-ness of Dinkins’ New York. Enchanted Brooklyn. New York’s cultural capital won’t be outspent anymore than Harvard’s endowment will. In other words, there’s no reason to go there.

What a mystery, then, that despite being so essentially of imaginary New York, Constance DeJong’s Modern Love should be such a refreshing and often poignant read. Of course, when this book was first published in the mid-1970’s, New York’s edges were as jagged as they were brilliant. In that moment, DeJong’s was a dispatch of a different sort, a pseudo-magical realist report from the frontiers of the previous decade’s flamed-out license and lapsed utopianism. Ugly Duckling’s decision to return Modern Love to print would seem to answer the call of two present imperatives: to further the process of correcting the canon, cracking its vault door to admit more historically marginalized figures; to get those of us accustomed to viewing the world’s intractability through lenses of gentrification, climate change and white supremacy thinking again about what revolution really entails. To that end, Modern Love doesn’t elevate dropping out as much as it asks those questions about individual choice — e.g., can you sell out to yourself? — that bedevil anyone hoping to reshape reality through the mere act of making.

Modern Love‘s own reliance upon well-established avant-garde tropes and violations of readerly expectations reflects the compass of this conundrum. The plot — young creatives navigate the interpersonal and professional frustrations of “having it all”; a life of the mind as well as a table with food on it — loses its own thread in “free love” and post-coital philosophy seminars as narrators shift from paragraph to paragraph and characters both change names and swap personalities. Whole pages are lifted from the annals of the Northern Renaissance and Dr. Strange comic books, and, like The New York Dolls, the entire enterprise revels in overtly aestheticized ugliness. The book’s very first line reads, “Everywhere I go I see losers.”

Indeed, from La Boheme to the amateur anthropologists taking buses to gawk at the native peoples of Haight-Ashbury, subculture has long been an object of some prurience. Modern Love gleefully (re)presents all the offenses with which lookie-loos having their first encounter with the demimonde long to stoke their disgust. (John Gardner would have hated this book. One can even imagine it serving as one of the models for October Light‘s high caloric trash novel-within-a-novel, Smugglers of Lost Souls’ Rock.) Which is also to say that Modern Love is something much more significant than a chronicle or document: it is, like the city at its actual best, a miscellany of sensibilities. Which is also to say it’s an exercise in form.

In place of a linear narrative’s hierarchies, Modern Love disappears into the wardrobe of literary types and, rather than playing dress up, digs in for a long purge. Orlando and The Nova Trilogy. Herman Hesse and Jorge Luis Borges. Raintree County and Peyton Place. As serial as soap opera and as sincere as a Very Special Episode, Modern Love‘s central fantasy turns on a very cosmopolitan conceit: that one can honor one’s origins most by successfully escaping them. Those two aspiring artists to whom the novel’s chapters circle back again and again — a female writer, a male musician — are both transplants from the suburbs of more middling American cities. Their ambition stems from a vague recognition that who they are is out of alignment with their destiny.

To point out that this quandary is not unique to New York is to quibble. The problem with Hollywood is that it washes out the real personalities of its stars and replaces them with wholesome nullities. What currency is more universal? (No question celebrity shadows the consciousnesses who occupy this book.) New York, however, mortifies. It’s blissfully, viciously unconcerned with where anyone comes from, because, in New York, there is no other place. “So much,” as DeJong writes, “for the melting pot.” Not surprisingly, the most affecting moments in Modern Love revolve around these characters as they confess their lasting fealties to their differing, and differently complicated, Midwestern parentages.

If self-invention is America’s most practiced secular religion, complete with its own catechisms of transcendence, then Modern Love is wise to squint at the artist’s faith in what as well as how their labor creates. Success dooms every art project, the ulterior motive of which becomes to vault its maker to the status of Artist. Yet nowhere is freedom less free from the high cost of impossible choices than in New York. Because, as much as artists protest the systemic inequities that make sticking to their principles so difficult, in the Art World, everything from success to failure ends up being personal. In one of Modern Love’s more overtly feminist narrative threads, love turns to hate as Rita (also known as Fifi Corday), a Parisian actress (or maybe she’s a dancer?) dramatizes her ten-year relationship with Jacques before an appreciative, if private audience. He accuses her of robbing him of his ideas, his genius, making a mockery of his life’s work — not that he’s made anything. But Art is male energy in this equation, and there’s only so much subjectivity to go around. Let’s call it an artificial scarcity of heroism. Either way, romance ends in sexist epithets and clichéd suspicions confirmed: “Jacques thought she’d finally revealed her true self. He’d always known that deep down inside she was a lewd crude, a contemptible woman. Now even Jacques was happy.”

The battle of the sexes exerts its gravity upon Modern Love, but you can tell DeJong is weary of the subject. During the 70’s, the Art World’s attitude toward feminine expression was still antagonistic, if not downright nihilistic. DeJong is gracious enough not to respond with her own form of nihilism. Instead, she’s as pragmatic as a Grace Paley. “The misfits I’ve been seeing everywhere, they aren’t real losers. They all have bank accounts: can afford to be losers. I’m broke.” All novels, of course, are commodities, and thus party to that system. Novels codify social relations, gossip, buttress ideologies by modeling personal desires. If pitched right against the axes of the zeitgeist, they can even be lucrative. But such novels routinely sacrifice the experiential at the expense of the thematic. While DeJong’s language can veer into perfunctoriness, the structure of Modern Love is a thing indeed. It’s only apparently anarchic. It doesn’t care about logic, nor does it follow the dictates of pure association, or exercise itself surrealistically. “NOT ALL COINCIDENCES ARE INTERESTING,” as one character muses in her notebook.

Rather, Modern Love simultaneously proceeds backward and withdraws forward. It’s in figuring out the often musical artifices underlying the novel’s double arc and keeping all its parts in motion that one feels most invited to connect reading Modern Love with pleasure. By the time we reach Book Five, we realize the novel has been leaving New York all along. The “whatevers” of the book’s final chapters betide themselves, quite literally, on a distant shore. Trapped by New York, these characters can’t be confined by it. Yet it’s not so much that they refuse to bow to New York’s pressures. In fact, their resistance isn’t active, or particularly “woke.” Rather, it’s contingent. Whether or not the accidents of the aesthetic passivity (that is, daydreaming) reflected in the novel’s own magpie design can bring about change where will cannot is a problem Modern Love is happy to leave unresolved. And that’s both a brave and exhilarating (non)-choice in an era when the novel has ceded its claim on the imagination. At its best, the contemporary novel is a fake editorial. At its worst? Another down-tempo, warble-saturated cover of “Can You Believe This Shit?”

Perhaps, then, its best to read Modern Love as a cautionary tale. Time travelers make the worst tourists. And all readers of novels are time travelers. The lesson of Modern Love can be summed up as, “Observe and be benign.” Which is another way of saying, “Interpret at your own risk.” This reviewer acknowledges that, in thinking about Modern Love and the question of why it merits reading, he is guilty of many anachronisms. That his circuit has not been the complete story of this book, or even its reappearing in 2017. But to unlo(o)se this literature means indulging more curiosities than any one reader can handle. So, read Modern Love because, after you’ve tallied yet another rejection letter, after you’ve sipped more shitty wine in that DIY gallery the fire marshall is soon to shutter, after the Baby Boomers have had history their way, and after you’ve survived your own Manhattan-inspired existential hellscape, what else is there to do but author post-modernism? Check that: rewrite post-modernism. And make no mistake: Modern Love is the Last of the Great American -Isms at its most nascent: its most sanguine and its most unruly.

The Maladaptation of White Noise

or, on being the other woman – Simone White