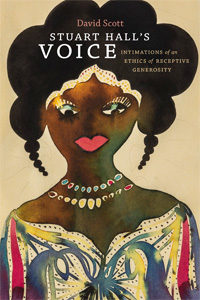 I first heard Mark Fisher’s voice when we met on the steps of Saint Marks Church-in-the-Bowery for an interview in 2011. Fisher, who sadly passed away in January, was in New York giving a series of talks following the publication of Capitalist Realism. As a good steward of the cultural studies tradition he was more excited about The Warriors t-shirt that he bought for his son than the talks themselves. There was nothing remarkable about Mark Fisher’s physical voice, but through his blog K-Punk and his writings on music and popular culture he became one of the most penetrating and prescient critics of his generation. I will say more about voice, the figure of the critic, and the importance of generations below, but here is Fisher in 2014 reflecting on the importance of Stuart Hall in a discussion introducing John Akomfrah’s documentary The Stuart Hall Project:

When I grew up, something like Stuart Hall, that’s what we expected to see on television. On Channel 4, yeah, we will have hour-long conversations with philosophers, that’s what television is. From my background, a working class background, that’s how we got educated. School wasn’t it . . . The BBC, Channel 4, and the Music Press, for all of us this was an alternative and better education system than a formal education system . . . Where is that now? What is the equivalent of that for working class people today? There is nothing like that anymore. Just the absolute horror of what something like Channel 4 has degenerated into now. Property shows for the super rich, exploitation shows about mentally ill people . . . It is like some horrible nightmare. This was all in the film — what was there, the future I expected, which was to build on exactly that 70s moment. That future was lost in the 80s, and it is all tied up, I think, because of everything that Stuart was saying then.

It is remarkable how many people were introduced to Stuart Hall in a similar fashion — that is through his voice. (Hua Hsu’s recent article on Hall in The New Yorker begins with a set of lectures delivered in Illinois in 1983, Sindre Bangstad recalls a friend introducing him to Hall by cueing up a lecture after they had finished Sunday dinner, and John Akomfrah’s video installation that preceded The Stuart Hall Project was called The Unfinished Conversation). Hall, a Jamaican-born theorist (or philosopher, critic, scholar, activist, teacher, public intellectual . . . such rigid classifications are difficult with certain people) spent the bulk of his career at the University of Birmingham and the Open University, but as Fisher’s reflection shows his voice reverberated well beyond the walls of the academy. For past generations — that which forged the New Left in the post-war period, that which took to cultural studies as an essential terrain of intellectual labor, that which tried to make sense of and counter the tectonic political shift indicated by Thatcherism, that which wrestled with race and identity in the condition of diaspora — and, as evidenced by the steady stream of books on Hall following his death in 2014, for several generations to come Stuart Hall’s voice will remain a key part of conversations on the left.

David Scott has been talking to Stuart Hall for a long time, and this conversation continues in Stuart Hall’s Voice: Intimations of an Ethics of Receptive Generosity. Scott is an anthropologist at Columbia and to my mind one of the most provocative and interesting figures in the constellation of literary criticism and political philosophy that falls under post-colonial theory. In his focus on tragedy and the temporality of post-colonial generations (i.e. the shifting relationship between past, present, and future) Scott has certainly marked out an intellectual trajectory somewhat at odds with Hall, but a deeper continuity remains between the two which makes Stuart Hall’s Voice such a lively exchange. “It is not unimportant,” Scott writes, “that we were shaped respectively by two especially volatile moments in Jamaica’s modern political history: you by the decolonization of the 1940s, me by the socialism of the 1970s. But we lived our displacement from these Jamaicas through different metropolitan locations, in different political-historical conjunctures, and through different intellectual frames and conditions.”

Stuart Hall’s Voice draws out these conjunctures (a key term in Hall’s lexicon) in five letters and a short coda. Scott’s through line, as indicated in the subtitle of the first letter, is a discussion of intellectual friendship — in what ways do we freely and happily indebt ourselves to others, how does friendship disclose a special form of attunement to the words and deeds of those we admire, what Hannah Arendt called the “two-in-one” aspect of thinking where our inner dialogue is suffused with the presence of others. The epistolary form is well suited to the theme, displaying, in good Aristotelian fashion, exemplary virtues that characterize this particular form of camaraderie as opposed to providing a theory of friendship. This is the first major lesson that Scott draws from Stuart Hall, who he calls a “listening self.” Both he and Hall likely spent most of their time dealing with “critical selves,” those who exhibit “the persistent deafness at work in much contemporary critical practice preoccupied as it is with its powers of pronouncement and argument.” The voice that Scott associates with Hall moves in the opposite direction, from closure to openness, driven by “a mobile responsiveness to marginalization and exclusion and by the moral-political prospect of being not only expressively but also receptively present to others.” Scott will call this kind of voice a “dialogical ethos,” and a “style,” which points to something beyond a facile distinction between the critic sitting in judgment of all that passes before their tribunal and the “good listener.” It is rather a general bearing, or an “aura and essence” in George Lamming’s phrasing, which however ineffable finds its confirmation in remembrances like Fisher’s.

Another, more straightforward way of making this point is to say that Stuart Hall lived and worked in history as opposed to finding some transcendental resting point without. Scott calls Hall “preeminently a theorist of the present, or more precisely, a theorist of the contingency of the present.” Nowhere is this better on display than in Hall’s intellectual interventions in the late 1970s and 1980s, beginning with “The Great Right Moving Show.” It is worth quoting the opening paragraph of that essay in full:

No one seriously concerned with political strategies in the current situation can now afford to ignore the “swing to the Right” which is taking place. We may not yet understand its extent and its limits, its specific character, its causes and effects. We have so far — with one or two notable exceptions — failed to find strategies capable of mobilizing social forces strong enough in depth to turn its flank. But the tendency is hard to deny. It no longer looks like a temporary swing in political fortunes, a short-term shift in the balance of forces. It has been well installed — a going concern — since the latter part of the 1960s. And though it has developed through a series of different stages, its dynamic and momentum appears to be sustained. We need to discuss its parameters more fully and openly on the Left without inhibitions or built-in guarantees.

As the essay proceeds the prescience of Hall’s voice at the beginning of the neoliberal era becomes apparent (see for example his idea of “authoritarian populism” where radical political ideologies build consensus within existing institutions). Moreover the call to the Left to think “without inhibitions or built-in guarantees” should return with a certain force in our current political conjuncture. Hall will eventually move towards identity as a concept which “is sutured to the changing problem and problematic of Left politics,” while Scott has moved in the direction of tragedy. In both cases we see very clearly what it means to honestly contend with contingency and avoid the closure that the critical self advocates in spirit if not in the word itself.

As would be expected given the circumstances, the letters can be at times elegiac, but for the most part they constitute a very lively conversation and an interesting introduction to the thought and style of both Stuart Hall and David Scott. If contingency is necessarily linked to plurality, it is also a conversation of two possible conjunctures that grew out of the post-colonial imagination of each of their respective generations. Other possibilities are there as well throughout the book, as Arendt’s “two-in-one” is more about tradition than exclusive conversations. Mark Fisher and John Akomfrah perhaps point to yet another generation to push the conversation forward, especially as the “Great Right Moving Show” sheds much of Thatcherism’s program towards an as-yet defined (though in many cases far darker) vision of the future. To paraphrase what was written in these pages shortly after his death, lets keep thinking about and with Stuart Hall.