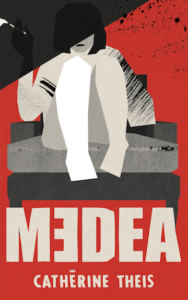 The tragedy of Medea, nightmare mother, hated and hurtful, proto-feminist vengeance-seeker, has been retold in literature countless times. In the famousest, Euripides’ play, Medea is a woman scorned, rejected by husband Jason and seeking revenge by slaying her children. In Apollonios Rhodios’s The Argonautica, Medea is not a powerful woman seeking justice, but a young woman brimming with love. In Neil LaBute’s medea redux, her ill-fated son is the product of rape by her junior high teacher when she was 13.

Poet and playwright Catherine Theis reimagines the well-worn tale in her new play, Medea. Set in present day, with cell phones and snowmobiles, but also floating in a timeless, celestial, godly haze, our heroine’s pain is so keen and tortuous, so epically tormenting, that she can hardly speak it aloud. The play transcends language as the events preceding it (the slain sons at her own hand) transcend human emotion. Theis gladly grapples throughout her play with the ineffable, and how exactly to, uh, eff it.

Traditional plays, I don’t need to tell you, are meant to be experienced in ephemera. They are seen and they are heard, and sometimes smelt. They are not merely read, as I am experiencing Theis’s Medea. You might think this throws a wrench into the reviewing process. Happily, this play is not traditional, and revels in revealing the scaffolding of its medium. Stage directions that can’t be translated to a theatergoer (“What is there not to love in this giant world?”) are easter eggs for the reader alone. In reviewing this play, I review it as a piece of literature, treating it like those modern novels from Fitzgerald’s This Side of Paradise to Sheila Heti’s How Should A Person Be?, which incorporate succinct and direct play-style speech, all caps and colons, to communicate dialogue.

Theis’s Medea is arranged in four movements, finessed by a series of satyr plays meant to, according to Theis’s introduction, “brighten moods after Medea’s story.” (In ancient Greek tradition, these plays dabbled in bawdiness and debauchery, drunken orgies and dick-slingin’. The palate tingles.) In the first movement, we are introduced to the bleak domesticity of Medea’s life after the death of her children. It is the picture of American boredom: she lolls on a couch as Husband (Jason of Argonaut fame, in this version, remains nameless) fusses over bills, watching a western for the 258th time. Medea yearns for something more, so they resolve to hit the road in their Alfa Romeo (it must be an Alfa Romeo, says Theis, “from the late 1970s”), chugging through the mountains of a Montana-like locale (a far cry from Olympus) to a rugged lodge peeping out from a snow bank.

In the second movement, as they resume their lives as Husband and Medea, she is escorted by the Milky Way. Medea touches on their recent history, the “accidental” (so she says) poisoning of their sons, and lets Husband know she’s late, menses-wise. According to her, the story goes like this:

Medea:
Remember
How I told you it was an accident,
But no one believed me? How I
Was chased out of town like a criminal?
It was only supposed to be deep-dark
Sleep, only a cloak of Death
Still warming their tiny bodies.

Husband:
Right, and then Euripides came along
And wrote that play.

The presence of the Milky Way, a swath of dancers, transcends the baseness of everyday speech. With Husband, communiques are blunt, brutish. Mortal words rise to the heavens and are wrought meaningless. To speak her truth, Medea corresponds with the Milky Way, with the chorus of Flames, and sings in their harmonies. The galaxy speaks its celestial ineffables, marked by asterisks and ellipses: “******* the night sky / hot-white ladled **********stars ***************Poured just for them.”

“The wish for bold speech never escapes me,” asserts our heroine. Medea, like Theis herself, is unwavering in what she wants as she hands over the rights to her story. The play ends with Medea reading an excerpt from her own book, titled Letters from Medea: “I killed, I may kill again. But for now, choreograph me into the trees’ canopy.”

Similarly, Theis writes in her introduction: “I want my work to have the force of something spilling out, uncontainable: either leaking from a mask or booming from a leafy treetop.” Theis constantly references the futility of the theatre in expressing this story, which transcends language: “There are a few instances where the language breaks down so much we must discover a new language in order to be heard. What is bracketed speech if not total ruin-destruction, spoken from the underside of voice?” She asserts finally, “The play should be performed with an unwilling audience.”

What does this mean? What does it look like? Is it even possible? Could you say as well, “This play should be read by an unwilling reader”? Luckily, as the reader, I don’t have to concern myself too much with playability. “My experience,” Medea reassures her onlookers, “is theatrical, not actual.”

The poetic drama espoused by the eff-lovin Greeks, by Shakespeare and Marlowe, dribbled out of fashion in the early twentieth century, with a last gasp by Eliot (1935’s Murder in the Cathedral, on the assassination of Thomas Becket). When considering poetic stabs at the ancients, it’s hard for me not to think of Sarah Ruhl’s Eurydice, which retells Orpheus’ myth from the perspective of his wife, in stark and tender poetry. Too, in Ruhl’s play, the truth is hard to speak aloud (“Orpheus never liked words”), and the stage directions hum with the unportrayable (“The father thinks, oh dear”). Theis proudly dons the mantle of the poetic drama and urges it forward at light-speed to the here and now. Instead of a scorned woman hellbent on revenge, hovering over a cauldron bubbling with herbal poisons, Theis’s Medea would not be out of place in the world of a Hannah Horvath or a Liz Lemon. Stage directions read:

She plays a Lou Reed record while she packs.
She continues packing, and practices
Air guitar on her thigh.
At one point, she holds up a pair of pants
And smells the crotch.

In a laudatory afterword from Steven Aaron Minas (such anciently Greek names, Theis and Minas, they almost seem staged): “Theis’ Medea takes issue with the very notion of female silence and replaces it with a roaring sound . . . ” Indeed, as a stage direction asserts, “voice gives itself over to gesture,” over and over again. It makes one think why Theis chose the theatrical medium for her retelling, as blocks of speech without an assigned speaker are interspersed throughout movements. Who is speaking? The Milky Way? The subconscious? The flames, or gods? Words are lifted to a place of surreality, of godliness, announced over the loudspeaker of the id or the ur-ego or the roilings of a subterrestrial gut.

In the reading experience, these roilings clash against Medea and Husband’s crotch-sniffing realities, adding a profundity and vitality to Theis’s contemporaneous retelling that resonates in reader in a singular way that I feel must be entirely different in the theatergoer. Shakespeare dispensed of stage directions almost totally, save a few exeunts, pursued by whatevers. However, Theis lives in the stage directions, in the unspoken. Why else would she bother with clear-cut, unspoken specifics such as these, in her opening notes: “Please, only one candy bar in the glove compartment. Candy bar must have nougat, almonds, and caramel. (Check at specialty stores that sell UK-imported goods.)” In these unvoiced gestures, both Theis and Medea overlap in their devotion to the ineffable. Why shouldn’t they both have control over their own stories as they are translated to the stage? Why not pin themselves down without ambiguities, without equivocation, without getting lost in translation? Words can only get you so far — beyond that, it’s all gesture, and boards to tread.