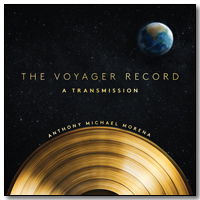 “What is it?” asks the book, over and over. “What?” Anthony Michael Morena’s The Voyager Record considers and reconsiders the Golden Record, a dreamy, hopelessly insufficient packet of information encapsulating the state of the world circa 1977, copies of which launched aboard Voyager I and Voyager II, two objects that are now very far away, farther away, in fact, than any made thing except maybe radiation. “It feels very much more like an album produced by the world,” Morena writes, describing the Record but also setting the record straight for the work in the reader’s hand, the jokey, unadorned prose and scattershot inclusiveness of which suggests something found, an artifact of a procedure more than an intentional whole.

The book proceeds in a parade of bursts that try on and discard tactics, from exposition to memoir to speculative fiction. The main strategy is one that to me (true, a librarian) looks deeply familiar. In these moments, the book documents an act of deep cataloging and descriptive bibliography. We encounter Morena as narrator sleuthing out errata and conflicting indexes and digging up the dirt on world music or nature sound selections, operations you see in rare book circles or material text Meetups and less in lyric essays. The conversation orbits around provenance (Sagan, NASA), distribution (solar system), political/personal circumstance (Jimmy Carter/Tel Aviv), material limitation (U-238) and time constraints (six weeks is not long). Add juicy apocrypha (Sagan, again), subsequent citation and reference (Star Trek, West Wing), and of course versioning, what is canonical and what is derivative (Uranium-plated LP or over-sized coffee table edition or 90s CD-ROM reprise or as yet unrealized ideal remix playlist).

Another reason I’m reminded of hardcore bibliophiles is they tend to love things in the world that do. There is a focus on objects that are not merely record and artifact of humans doing what humans do (author thinking, bureaucracy plodding) but also objects that coordinate and mediate and intervene in the midst of battling concerns. Consider the tiny way, for example, that the production of the Golden Record coordinated dozens of governing bodies. Consider the Record itself, an ever-twirling-in-the-dark promise to enact interspecies communication at some unspecified far off time and far off place.

Plus bibliophiles simply love things. An eros embodied by the commodity that achieves escape velocity and breaks orbit, of the market but not in it, the particular object obtains new stature if for no other reason than this collector especially cares for it. Morena cares, cares about caring, which may be the chief take home message.

These are the ways in which The Voyager Record operates. Not unfamiliar, generic bibliographic (or bibliophilic) strategies deployed jauntily and with understated reverence and in the service of a thing that, whatever it is, cannot be said to perform a genre, are what bring pleasure to reading Morena’s project. Granted, a treatment of a recently unboxed 18th century proto-novel will likely make fewer references to Carl Sagan’s love life, Grandmaster Flash and/or Israeli Occupation and yet, the resemblance.

But what is it? There is something strange following this line of reasoning. Circulation, reception, materiality, that kind of thing, they describe the object and its branching implications as it moves through this world. Can it still be bibliography past the exosphere? Can an object constructed ever not be earthbound? Not that these questions are exactly the questions to be asking Morena, but there are related ones. The impulse that makes a multi-threaded, loosely constructed bibliographic heap kind of compelling even as it threatens dissolution, does that impulse still hold up at the interstellar border, or four years past that, which both Voyager I and the Golden Record are by now?

I can’t shake this one image, of a floater, a solo spacesuit against the black and glinting in the gold of the visor, the reflection of a single word. Three letters. One main tack of the lyric essay generally and The Voyager Record in particular is the logic of accumulation – and plus and plus and – a procedure that can be incredibly satisfying. It is a workhorse conjunction performing honestly, skirting imposition by avoiding relation which is the province of preposition, best case doing violence neither to the object of attention nor the reader. Plus, if you need it to, and can perform a subject’s own obsessiveness, so it’s personal too, puts the reader at ease highlighting the narrator’s chief fault, which is too much. But an accumulation always threatens to stack, that is, threatens to make a tower and towers always point somewhere, reluctant teleology. There’s this trope, when someone wants to express way too much, they make a distance. How much is the US in debt? Crisp dollar bills stacked to the moon and back five and half times. Or so says Herzog’s latest documentary, a day’s worth of internet traffic burned to CD would reach up twice as tall as the distance to Mars.

But whose arthritic fingers would be held responsible for burning so many discs? Who would have to keep the team in line when, realizing memory takes a different form now, the project architects long since dead, the question pipes up: Why CDRs at all? Whose frustration in trying to place yet another disc on the stack as gravity gets weaker and weaker, how the stack refuses to adhere to the linear literalization intended, reverting only to discs afloat, and if unfortunate enough to be imparted some hair of inertia, to keep slow hurtling for as close to forever as we dare name. And even at the top most disc, if we were to get that far, does that count as top anymore? Trying to translate immensity into height just as the concept of height dissolves along with every Earth-centric mode of orientation.

That last disc, escaped from your chubby inflated fingers and floating off towards the Oort cloud, ineffectually chasing the Voyager’s forty year head start, that is what this work is like. A real difference in velocity marked on the one hand by pop culture regime shifts, innovations in memory storage, the finite lifespans of main characters, and on the other, a gentle, persistent if inhuman careening toward oblivion. Can we care, too? Such a pile it piles past the bounds of what such a pile might be measured by, so that it floats off, slow-mo reverse shot, the word and either the only apt, articulate hinge between one imaginable black and another. Or else. Suggestive of all the failure of all the relationships, the chains of cause and effect and comparison that backbone the The Voyager Record, which hopes with every new fragment that our histories might be entwined, never squashing the doubt that they are likely unrelated.