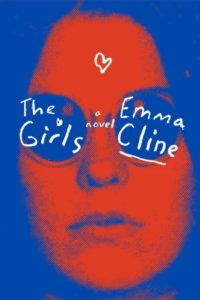 “They were messing with an uneasy threshold, prettiness and ugliness at the same time,” Emma Cline’s narrator thinks upon first seeing the girls. They have allure with youth and great hair, but are also dirty, caught pulling an uncooked chicken out of a garbage can on one of their food runs to ferry supplies back to the commune. So begins, The Girls, the story of fourteen-year-old Evie Boyd’s seduction into a cult in California in the summer of 1969. The affable cult leader — are cult leaders ever anything but affable? — attracts a handful of women, a few men, and couple of feral children, and they spend the summer riding around a sinister school bus painted black, when not holed up at the ranch, preparing for the summer solstice, or scrounging for money.

Descent into a cult is a well-worn story, with a male messiah figure at the center, but Cline shifts the focus here. Russell, the Manson stand-in, is the reason these misfits find each other, but he is largely incidental to Evie’s story. The main attraction is Suzanne, one of the older girls – all of nineteen – who becomes an object of obsession for Evie. Even Suzanne’s pimpled skin is beautiful to her, imagining it “the rosy flame an inner excess made visible.” When, on her first night at the ranch, for a solstice party, Evie winds up in bed with Russell, she is repulsed and a little proud, happy to be wanted in the same way Suzanne was. “She recognized the inward shift you sometimes see in young girls, newly sexed. It’s that pride, I think, a solemnity. I wanted her to know.”

Cline’s understanding of the psychology of teenage girls is so accurate it’s almost painful to read. She describes the desire you can feel for a peer, that isn’t quite sexual or maybe it is, in which everything she does is compelling. Even if the flirtation doesn’t end in sex (though there’s plenty of sex here), the experience is exactly the same as a crush. Dying for the approval of a girl more beautiful, cooler, and – this is the thing that usually cinches it – slightly remote, is a story I’ve seen often in life, but rarely on the page. A girl like Suzanne never appears to need anyone. And girls like Evie, hot messes of need, flock to them. Cline has explored this dynamic before, in “Marion,” the short story in The Paris Review that won her the 2014 George Plimpton prize. Like The Girls, it features the Northern California landscape, an oblivious mother, and a narrator given to self-conscious and highly lyrical observations.

Cline’s nuanced descriptions are a pleasure to read on their own, and at their best reveal something elemental about the characters. But at their worst, as has been pointed out in other reviews, the lyricism gets tiring; not every observation needs to be embroidered with a simile. “Candied with silence” is an example of a weaker one. But at her best, Cline is most impressive on the level of the sentence, her descriptors weird and exacting. “I ate in the blunt way I had as a child — a glut of spaghetti, mossed with cheese. The nothing jump of soda in my throat.”

There is continuity in her insistence on rich description, impressions filtered through a teenage girl’s reference points, with childish words like “scudded” and “scrum” cropping up all over the book, or, the somehow perfect, “minnow stink from the river.” She has a knack for summing up – and dismissing – scenes of normalcy: “college girls with part time jobs and library cards and split ends.” Evie’s father after the divorce, awkward and unused to his daughter, appears to Evie like a nervous boy at a dance. The need to compare things, like a tic, reflects the restlessness of Evie’s mind. She’s still waiting for regular life to transmute and become interesting. Unfortunately for her, it does.

When she’s picked up on the side of the road with her flat-tired bike, she slips easily into the family, and the summer ends in murder, a foreshadowed event you see flashes of from page one. (A heart drawn in blood on the wall; the people tied up in the living room.) The way Evie, as an adult, is always poised for violence; she knows now how things can go very wrong, very quickly. But in spite of the undeniably interesting source material to draw inspiration from, in comparison to its masterfulness as a character study, The Girls’ plot disappoints. The summer is a slow accrual of detail, the increments of Evie falling in deeper, and stealing money from her mother, recently divorced, whose woundedness so repulses Evie you can’t help but think Evie sees the germ of it in herself. Her mother is heartbreaking in all the ways she tries to reinvent herself in the New Age hippie ethos of the era – affectedly drinking herbal tea out of a bowl, going macrobiotic, meditating. When Evie sees the romantic, youthful squalor the commune she thinks “This wasn’t bullshit dabbling like my mother’s afternoon workshops.”

Cline has all the elements in place for a gripping story, but the novel unfolds languidly, feeling more like a poem than prose at times. Not enough happens as we are building up to the murders, which hinted at for so long, feel inevitable and like, let’s get this over with. We all know the story from Helter Skelter, or Joan Didion’s essays, or the prison interviews you can watch on Youtube of Charles Manson, crazy eyes and swastika peering out of his face. One notable change Cline makes in her story, is the murder of a child. Is this better or worse than Sharon Tate’s fetus being carved out of her body? Evie imagines the moment of the boy’s death, coming to meet Suzanne. “Then he was in her lap, and she held him there, the knife like a gift she was giving him.” The scene didn’t need this kind of prettying up, “a gift” that feels cheap, at least to this reader.

If the book is weighed down by the language, at least Cline doesn’t burden it with heavy-handed reference to the decade: the music and films, the nostalgic cultural touchstones. Perhaps because, at twenty-seven, Cline wasn’t alive then and rejects the authority to write this time period. Instead she conjures a similar atmosphere. Russell doesn’t approximate too much of a Manson figure, nor does Mitch Lewis embody Brian Wilson. Cline has explained in interviews, about finding Helter Skelter and being most interested in the girls of the book — though they were given minimal attention, with Manson occupying the central role. As a result, she had more room for invention. What are they like, and what went wrong for the girls? For starters, being girls. She illuminates the way the patriarchy infects society, even in the sexually liberated time of the so-called summer of love.

I waited to be told what was good about me. I wondered later if this was why there were so many more women than men at the ranch. All that time I had spent readying myself, the articles that taught me life was really just a waiting room until someone noticed you — the boys had spent that time becoming themselves.

The freedom they’re after on the commune, away from the conventional world, without rules and without jealousy — is revealed to be as hollow as anything else.

As we’re approaching the murders, present-day Evie tries to recounts. “I knew just being a girl in the world handicapped your ability to believe in yourself. Feelings seemed completely unreliable, like faulty gibberish scraped from a Ouija board.” As happens with these kinds of assertions, you want to push back. I can’t help hedging, maybe not now, or at least not as much, not in the generation Emma Cline and I belong to, where more often than not our parents told us we were special, and teachers said girls were just as good at math and science — something that I doubt I would have considered otherwise. Cline is more convincing when she comes at her topic more obliquely, drawing a comparison and letting the likeness deepen.

Of course the girls didn’t leave the ranch: there is a lot that can be borne. When I was nine, I’d broken my wrist falling from a swing. The shocking crack, the blackout pain. But even then, even with my wrist swelling with a cuff of trapped blood, I insisted I was fine, that it was nothing, and my parents believed me right up until the doctor showed them the X-ray, the bones snapped clean.

Please take a moment to appreciate the perfection of the phrase “cuff of trapped blood.”

Evie never really recovers from the summer of 1969. She escaped mention in the true-crime books, and keeps in touch with no one from the past. But her memories are never far from the surface. As an adult, housesitting for an old friend, whose son and girlfriend unexpectedly show up, Evie is forced to confront her past. She’s of macabre interest to the kids, “that lady” from the cult. She brushes it off, but in a moment of confession she tells the girl, for whom she feels an unexpected sympathy, that she doesn’t know what would have happened if she’d been there on the night of the murders. She might have just gone along with it. And this knowledge is a weight that has stunted Evie’s entire adult life.

What happens to a person, who lacks the surety of their own goodness? Not goodness on an exceptional level. The bare minimum for goodness: the absence of evil. The story of the self unravels, when you cannot tell yourself that at your core you are not a bad person. It is why Evie’s adult life feels so static; she is a home health aide, with seemingly few friends, who “tend[s] to the in-between spaces of other people’s existences.”

The examination of evil is usually more interesting when it involves normal people deviating from the norm. When another story comes out about a girl locked in man’s dungeon for years, I reserve all my wonder for the wife. Did she know? Did she allow it? When a person is unambiguously evil, that information can be filed away, not much gleaned from puzzling it over. The more interesting question isn’t how Hitler came to be, but always how did the Germans let him? It’s why the Milgram experiment is repeated every few decades. The conclusion seems to be ordinary people crave an excuse to act badly. And once knowing that about yourself, what kind of life is available to you afterward? Cline doesn’t delve deeply into the motivations of the women on the ranch; though she touches on it briefly, as is quoted above. If I wish several things to be different about the book, it’s because Cline sets the bar high for herself at certain moments, with her excellent prose and surprising insights, that it’s a disappointment when the book gets muddy and vague. In spite of these flaws, Emma Cline is undoubtedly a gifted writer, who shines a light on the danger and the power of being a teenage girl, in our own time as well as the past. She’s currently at work on a second novel, and without even knowing the plot, I have no doubt I’ll be lining up to buy it soon enough.

Laura Cresté is a writer from Rutherford, NJ. She holds an MFA in Poetry from NYU, and a BA from Bennington College. Her work has appeared in Tinderbox, Powder Keg, Phantom, Bodega and elsewhere. She blogs monthly at Ploughshares.