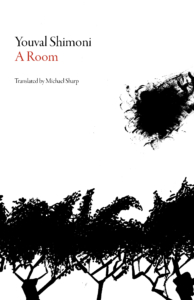 Youval Shimoni’s A Room is a big book. The 597 pages of Michael Sharp’s translation from the Hebrew into English weighs a little under two pounds. And yet it feels like it should be bigger, should weigh more: the novel it contains is designed to test the limits of representation, to underline the absurdity of any attempt in any form of art to capture experience. As with all great works of literature, it is difficult to believe that so much can be contained by so relatively small a vessel. It is yet another reminder that while we live and breathe and read in a world bound by the laws of space and time, what lies within a book’s pages suffers limits of a different strain. Thus, we experience books as a series of paradoxes — bound yet limitless, reductive yet impossibly complex, defiant yet defeated.

This sense of defeat pervades the novel, and it is evident even in its structure, as each section of the book takes up fewer and fewer pages. The first section, called “The Lamp,” spans 400 pages, and is a national epic disguised as a mystery novel. The second, called “The Drawer,” is essentially a eulogy for youth given novel form, and is about half as long as its predecessor. The last, called “The Throne,” is a bare snippet of a tale, its 12 pages belying the vast, Borgesian conceptual space it occupies. The declension of story length is in a sense a progression towards silence, and underscores Shimoni’s concerns regarding the impossibility of artistic representation, presented in increasingly abstract iterations. The first provides the smallest and seemingly insignificant details of its many characters’ lives, offering full portraits of the entire cast of characters; the second focuses on pivotal moments in the lives of its much smaller cast; the last dispenses altogether with the concept of character.

Had “The Lamp” been published by itself, it might have been hailed as a significant literary achievement in its own right. Something of a cross between a mystery novel and Virginia Woolf’s The Waves, its basic plot revolves around a hapless detective reviewing the series of events that led to the immolation of a man on an I.D.F. military base, in order to report to his superiors “exactly what happened: not approximately, exactly.” He is told to “be precise for a change.” To that end, the detective watches video footage of a film crew of eight people tasked with creating an instructional film for new recruits, and the bulk of the action in the story is a precise description of the film crew going about their business, doing multiple takes of a sketch comedy routine meant to lighten what is otherwise an introduction to the I.D.F.’s missile batteries. Yet Shimoni then complicates this straightforward setup — the reader watching the detective watching for clues in a video of the film crew — by inserting in large blocks of texts in parentheses the internal lives of each character, rotating between their points of view, and offering in increasingly granular detail each character’s past, their obsessions, their concerns, and their traumas, to produce a portrait of Israeli society circa 1993 as a whole.

The technique manages to convey the variability of human experience as well as its essential sameness, capturing with acute poignancy how atomized and distant each human is from every other, despite their many similarities, and the unfathomable loneliness that is, in the end, the defining human attribute, the one that serves as the primary impulse to create tribes, nations, to create anything at all, whether it be art, friendship, or love — some way of denying the fundamental truth that humans, being individual consciousnesses, are fundamentally alone in this world. And yet, even as Shimoni uses different points of view to plot these individual points and emphasize their distance, it is in relation to each other that a picture of Israeli society emerges. A Room documents the national mood of a country that is forever on the verge of peace, forever on the verge of war, one that has just recently survived not only bombardment by Iraqi Scud missiles, but also the psychological threat of chemical weapons attacks, a country that was borne out of the gravest atrocity in human history only to continually fight war after war for its continuing existence. It is about as complete a portrait of a nation as any epic, the Iliad, say, or the Odyssey, or perhaps the Book of Judges. One can imagine an anthropologist of the future reconstructing 1993’s Israel entirely from the text, right down to the white-washed eucalyptus trees on I.D.F. bases, the cleaning products used, the music and celebrities that entrance the populace, and even the popular peanut candies eaten by children blissfully ignorant of the events that have already shaped their lives and will continue to determine the fate of their nation.

“The Drawer” is, on the other hand, only obliquely concerned with Israel. Told in a loose second person, the story is about a painter recounting to his past self an oddball caper in which he and three Parisian clochards broke into a city morgue, where he had the homeless pose for a recreation of Andrea Mantegna’s The Lamentation of Christ. Instead of piling up details about the lives of these homeless, the story limits itself to how each person fell to homelessness, linking their tragedies with the painter’s own heartbreak after losing the woman he loved, all of which are likened to a kind of limbo or pre-death. Mantegna’s painting serves as scaffolding for the storytelling technique, as the painter returns again and again to the painting’s forced perspective, with the too-small feet dominating the foreground of the picture, and the reduced torso giving way to the even more diminutive head. The idea of Christ, pictured before the impossible resurrection, offers insight into the story’s theme — that to rise from death seems about as impossible as constructing a character from his past, or depicting a person, not just a representation, in a painting.

“The Throne” tells the fable-like tale of a nation that seeks to glorify its god following a military victory, but any attempt to build a finite monument to the god’s infinite glory seems an insult, so the plan changes repeatedly until it ceases to exist, turning into a thought experiment thought up by a theoretical descendant of the tribe.

Taken together, the three parts inform one another and provide added conceptual depth. “The Lamp” in many ways is about the characters’ present, much as “The Drawer” is about characters’ past and “The Throne” concerns itself with the nation’s future. Similarly, the three stories follow a tripartite schema of observation, reflection and abstraction, the first story emphasizing the details of its characters’ lives, the second the consequences of isolated and more important events, the third the implications of such consequences. It is only by their juxtaposition that these stories have their meanings fully fleshed out. The most prominent example of this is that the Mantegna painting is mirrored by the structure of the book: the massive feet as the first story, the truncated torso as the second, the abstract finale as Christ’s head. That is but one resonance that echoes through the novel, pointing to the complexity of its construction, and the formidable dedication Shimoni has to the execution of his idea.

This dedication allows Shimoni to elide certain concepts or observations and thereby lend them as much weight as the many ideas and details he chooses to lavish with his attention. For example, in “The Lamp,” a story that appears to contain everything about Israeli society, there is only one direct reference to Israeli Arabs; moreover, the ostensibly central mystery of why a man on the base has been burned to death remains unexamined, suggesting rather explicitly that the great mystery of any life lies not in the circumstances of death but in the conflagration of events and small crimes that constitute a life’s experience. In “The Drawer,” living life in the moment is pitted against trying to capture a moment in life in a painting over and over again, and yet the story serves to show how the narrator chooses neither life nor art in continuing his obsession with the past. The titular seat in “The Throne” is from an apocryphal version of the tale, one that the reader is told is believed by only a few, yet somehow that non-existent idea for the god’s monument came to give the tale its name.

And yet, for all that, Shimoni’s faithfully executed plans and rigorously examined ideas are not the sole reason to celebrate A Room’s translation into English, 16 years after its original publication; the novel also happens to be beautifully written. In lesser hands, an attempt to show the impossibility of artistic representation could be a gimmick, or, rather, depressingly successful. And while the novel’s thematic complexity is most evident when the reader takes a God’s eye view, what instead draws one in is the pathos Shimoni inspires for each character and their concerns, their tragedies, the little bits of faith they cling to: all the little paradoxes that make life both awful and bearable. And even if none of these characters exist in any real sense, they persist in the reader’s imagination much as they were imagined by the author, leaving the reader with that final paradox — that the book does not represent life, and yet does; that these characters, who have never lived, not only do not die, they live and live on in the reader’s mind.