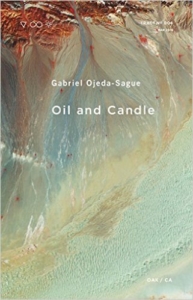 In his debut collection Oil and Candle, Gabriel Ojeda-Sague describes and deploys ritual forms in order to undo the obscuring magic of privilege, especially as it has been constructed through European and Anglo-American poetry. Doing so, he makes room in language for meditations on violence and queer and Latino experience.

Oil and Candle begins with a litany called “Limpias,” or roughly “spiritual cleansings.” I wasn’t quite sure what he meant. But there are a lot of videos of limpias on Youtube. This seemed like an OK place to start because Ojeda-Sague presents ritual as an everyday experience like buying milk or toilet paper. For instance a ritual “abrecaminos candle was 3$ in Miami but when/I went to San Francisco the same candle was 4.50$.”

I clicked on a news feature from TV Azteca. I watched a curandera move an egg around a petitioner’s body to purge it of negative energies. In a voice-over, the journalist asked the viewer their opinion: could there be something to limpias, or are they simply an eccentric custom handed down for generations?

We could ask the same questions of poetry. Does it do something? Can it change us? Are poets, as Shelley suggested, “the unacknowledged legislators of the world,” or is poetry more like a history of power, populated by poets whose work moves in and out of favor as the political winds shift? In Oil and Candle the journalist’s question about the power of ritual and the question of poetry’s political utility are one and the same. Ojeda-Sague brings these questions together by opening his collection with the long poem, “Limpias,” which functions in two ways. “Limpias” operates magically as a purification rite and poetically as a kind of anti-invocation, suggesting that the poems that follow “Limpias” stand apart from the muses and gods who have been imagined to invest Euro-American poetry with power. These poems instead pursue power on their own terms.

Ojeda-Sague explores the connections among poetry, power and magic by critiquing the role of European and Anglo-American poetries in effecting a literary culture where “every body gets very dramatic about the emotions of white men they have many terms for it in books that I have read many times.” By contrast there are comparatively few “terms” or representations of the inner lives of women and people of color–which makes it more difficult to to feel or imagine, queer or Latino experience. Expanding understandings of what personal experience might be, Ojeda-Sague represents subjectivity as potentially grounded not in an individual body but in a larger social body.

For example, Ojeda-Sague’s poems examine the ways that poets and poems are invested in blood, a highly charged symbol he investigates through repetition. On one level, “blood” can imply a particular kind of group relationship (family, ethnic group, national group). But blood also indicates our shared vulnerability (“if you prick us, do we not bleed?”) and our shared histories of colonialism and warfare as well as the violent socio-political context that saturates us. In these poems, blood is imagined multivalently as kinship and as exploitation, as heritage and racial violence, as inclusion and exclusion, as slaughter and as self-sacrifice. Poets and poetry occupy highly contested space as Ojeda-Sague offers: “limpias of communist poets who forget who killed my family/limpias of the market poets who forget who killed everybody else.”

Concluding “Limpias,” the speaker describes extracting countless poets from his belly button — a bodily site that indexes natality and also collects lint — and placing the poets in a tiny jar of limpias solution (perfume and dye) sold for ritual purposes. This gesture is dark and funny and strange and supports the ambiguity of Ojeda-Sague’s mysterious preposition, “of”: do the limpias of these poets cleanse Ojeda-Sague’s poems from Euro-American literary influences, or do Ojeda-Sague’s poems cleanse poetry itself?

Is the speaker simply cleaning gross junk out of his belly button or are the poets he refers to somehow cleansed by their immersion (and confinement) in the tiny limpias bottle? Is Ojeda-Sague effecting, through his language, “limpias of the poets who have never been scared just of walking around the world/limpias of poets who trust the police”? Can privilege be washed away? Can marginalized poetries be liberated from the forms and voices of the oppressors? What does ritual purification mean for someone who knows that “When I exist/I am complicit”? Ojeda-Sague engages with such big questions and continues by addressing an equally vast metaphysical question: is magic real?

Recalling syncretistic magic practiced in the Latino community in Miami, the speaker describes growing up not necessarily believing in magic, but taking pains to avoid being cursed, just in case:

This final punchline — the wry “very very friendly” — accomplishes something almost magical: it makes me laugh. What is it to be made to laugh? (I’m recalling Arthur Miller’s depiction of the Salem witch trials in The Crucible: “She sends her spirit on me in church; she makes me laugh at prayer!”) How can someone produce an almost involuntary reaction in someone else’s body? What magic is this? Humor is one way that Ojeda-Sague points to the “magic” of poetry in producing emotions and affects that move through a social body, even while his speaker expresses skepticism and uncertainty about the effectiveness of ritual and of language.

Despite doubting the power of poetry and ritual, the speaker nurtures, throughout these poems, an impossible desire for the world to be a kinder place than it is. For instance, the poems in the final series in the collection, “Abrecaminos,” were written as part of a “useless 7 day ritual involving an abrecaminos candle, an ace of wands from the El Gran Tarot deck, accompanied by spoken material, read material and music while focusing on the intention of opening up paths of resistance against warfare.” The Abrecaminos poems meditate on an impossible problem (war) and document a “useless” ritual.

What is the purpose of this ritual, these poems? Oil and Candle prompts a return to central questions about what it is we’re trying to do with language. Reading these poems, I felt that poetry, like magic, can perform unpredictable — and thus hopeful — work in the world. Poems and the feelings they elicit circulate like blood not through a body, but through a readership, accumulating unpredictable resonance. Pretty good, as “useless” practices go.

Emily Anderson is the author of Little: Novels and a PhD candidate in English at the University at Buffalo.