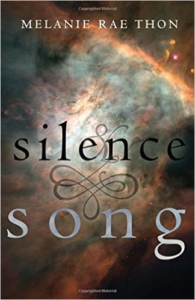 If Melanie Rae Thon is a writer less widely read than might be expected, given her skill in creating vivid characters and evoking an equally vivid sense of place, among the reasons for this would surely be the sheer intensity of her work, which can at times seem unremitting, even claustrophobic. Not only does she typically focus on distressed characters often facing the direst circumstances, but her compressed yet urgent prose so insistently attempts to encompass these characters and their situations, to describe, summarize, and account for their states of mind and being, that the reader either becomes captivated by the lyrical pulse of Thon’s language, or it can start to seem oppressive. This effect is especially pronounced in Thon’s most recent fiction, including her new book, Silence and Song, in which lilting language takes on much of the role assumed by plot in more ordinary fiction.

to know the strange places people hide what’s precious. In unlit rooms, he’s smart as a blindman: he finds one loose brick with his fingers, hears the single board that wheezes beneath him. People on vacation stash jewelry in the freezer. An emerald ring with tiny diamonds, there wrapped in plastic behind the corn and carrots. He feels it. Long guns lie quiet between towels under folded linen. Do you think he won’t smell them?

If Thon’s style can be called “lyrical” or “poetic,” it is not because it casually spins off decorative phrases or floats on a cloud of figurative language. Its effects are more subtle, including parallel phrasing (“finds one loose brick . . . hears the single board”), deftly timed assonance (“strange places,” “wheezes . . . freezing,” “tiny diamonds”), and unobtrusive alliteration (“brick . . . board . . . beneath,” “corn and carrots”). Thon’s prose is pervasively rhythmic, achieved through tonal modulation of both sentence length and sentence types, modulations that give the prose its kinetic quality.

This kinetic quality is mirrored in the narrative structure both of Sweet Hearts and Thon’s next novel, The Voice in the River (2011). In each novel a story is told — in the former, the story of Flint Zimmer’s ultimate, desperate descent into murder, in the latter of the search for a missing boy, feared drowned trying to rescue his dog — but in both it is as if the story eventually just happens, emerging not from “storytelling” per se but as a consequence of shifting perspectives and circumstances, supporting and tangential characters providing a kind of narrative counterpoint that echoes on a formal level the tonal patterns of Thon’s prose style. Her fiction is attuned to “the voice in the river,” but it is the reverberations of that voice as it resounds among those who hear it that Thon’s writing attends to, not the river’s current as it rushes forward.

If this de-centering of plot is characteristic of all of Thon’s fiction, even the earliest, which is the most conventional in its use of character, point of view, and narrative sequence, Silence and Song is Thon’s most radical experiment in form and lyrical expression. Composed of two novellas, “Vanishings” and “Requiem: home: and the rain, after,” and a brief interlude between (titled “Translation”), the book is as full of lost souls as her previous work — immigrants wandering the desert, a runaway boy, a drug-addled killer and his suffering sister. But the purpose of telling their stories, however obliquely and discontinuously, seems less to simply give attention to otherwise marginal characters, or even to create sympathy for such characters, than to view them all as part of a living continuum, a continuum on which pain and suffering occupy their place in the enduring order of existence (as does redemption from that pain and suffering occupy its place). Orlando, one of the undocumented immigrants, nears death from thirst and exposure:

Stars pulsed: amber, orange, turquoise, violet. White flares and red implosions. Now, tonight, while the dead watched, whole galaxies popped in and out of existence. Never had Orlando known the names of stars, but he knew them now as he knew their colors. This sphere of broken light was the mind of God, and they were small and dark inside it.

A kind of spiritual animism or pantheism informs much of Thon’s work, but this effort to reveal the connectedness of all Being becomes especially central in Silence and Song. It comes off least effectively in “Vanishings,” which in its portrayal of the reality behind the impersonal headlines — “Illegal Immigrant Deaths Spiral to New High in Arizona” — threatens to sentimentalize the migrants and their plight, making it difficult for the reader to discern the broader theme separate from the pathos of the situation. Some readers no doubt assume that invoking such pathos is the author’s goal, an impression reinforced by the novella’s narration by a teacher of children with special needs, who can especially identify with the “disappeared” in the desert because her own infant sister “vanished” in a desert car accident (consumed by the ensuing fire”), an accident that also claimed the life of her older brother. The story of the narrator’s family, including her brother as a “ghost” roaming the desert, alternates with the scenes of suffering among the border crossers, such as the misfortune of a man who voluntarily leaves supplies of water for the immigrants who is shot and killed by a 14 year-old boy while attempting to help the boy after he has crashed a stolen car, as well as briefer scenes evoking nature — bears, honeybees, the saguaro cactus.

This is all done quite seamlessly, and the echoes and parallels among all the episodes bring coherence to the novella’s interlacing form. Yet finally “Vanishings” sacrifices aesthetic pleasure to an overindulgence in too-facile emotional effects, which also obscures its own enabling vision. “Requiem: home: and the rain, after,” is a much more effective realization of this vision, as its formal design, if anything even more adventurous than “Vanishings,” more successfully balances an intrinsic aesthetic interest with the underlying theme it is intended to communicate. Narrated by the sister of a young man who commits a convenience store murder that is captured on videotape, the novella relates the story of the murder and its aftermath, its roots in the man’s troubled past, interspersed with scenes from the after-effects of the nuclear meltdown at Chernobyl, an event that took place on the heels of the murder and, for reasons the narrator makes evident, became linked with the family’s attempt to assimilate the brother’s action and its causes.

The most immediately conspicuous feature of “Requiem” is its use of what seems a poem to begin the narrative exposition. The device is continued on subsequent pages as well, apparent poems juxtaposed with prose passages providing us, for example, our first glimpse of the crime scene: “The video stops and starts and plays again. Doesn’t show the girl’s face, the girl too stunned to move, the speed of a bullet leaving the gun . . . .” But when the sister recalls a visit from the police, we get a verse rendition:

Please, the policeman says, as if
he loves you. Dark hands flutter
open and close, exposing

pale skin of the palm, sot
pink skin of the fingers, everything
strange, hands too big, fingers flexing.

It is as if the lyrical impulse animating all of Thon’s fiction has here finally literally expressed itself as lyric. While the writing in these lyrics and the writing in the ostensible prose passages are not notably dissimilar in expression or cadence, the effect is to keep the reader suspended above the presumed narrative “flow” of a story that might otherwise seem well-suited to a dramatic — even melodramatic — treatment. Instead, the reader is made constantly aware that language, not story, is the irreducible medium of fiction, that “what happened” is only the beginning of the explorations a work of fiction might make. Thon is interested in the long reach of events, the mental afterimages they leave, the attempt to reckon with their consequences. If for the narrator of “Requiem” these events and their indelible influence return as poetically heightened fragments, such would only seem in its way an accurate representation of the character they assume in retrospect and reflection.

This free interplay of prose and verse also itself puts into question the very distinction between the two, between “poetry” and “fiction.” I do not believe that Thon wants to turn fiction into poetry, nor simply to write “poetic” fiction. Instead, she works to erase the boundaries altogether, leaving only the act of writing, which through its aesthetic ordering (whatever name we want to give it) can make us briefly aware of the potential consonance of existence. It is an illusion, of course, although in the process of “making poems of the words” within our reach, as the final lines of “Requiem” have it, we might momentarily imagine that at the end “we will need no more words ever.”