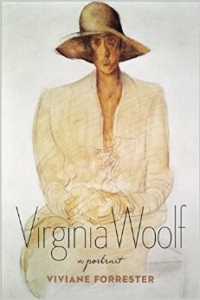 The late Viviane Forrester, a French writer who published numerous novels across a career spanning some four decades, wrote a strange little book about Virginia Woolf. Virginia Woolf: A Portrait is not a biography in the commonly understood sense. It isn’t, in truth, a “portrait” of Virginia Woolf either. It is, more specifically, a psychological enquiry into her suicide. Though it draws heavily from primary source materials, it is in many respects a quasi-novelistic work, told in a stylized, fortune-cookie register of gaseous syntax and occasional verbless sentences, capriciously flitting in and out of the historic present tense. The River Ouse, in which Virginia drowned herself at the age of 59, appears intermittently by way of grim reminder of where we are headed. (For example, at page 58: “It is not yet the time for us to go all the way to the River Ouse.”) The total effect is to aestheticize both her emotional problems and her death, in a manner some readers might find distasteful or even ghoulish. No doubt these very characteristics made a positive impression on the judges of the Prix Goncourt for biography; the book won the prestigious French prize in 2009, and now appears in English for the first time courtesy of Jody Gladding’s translation and the Columbia University Press. A heady blend of cod Freudianism and prurient psycho-sexual sleuthing, it is compelling and objectionable in equal measure.

We are treated, relatively early on, to this trite caveat: “A suicide results from a network of factors, not a single cause.” Indeed. And yet Leonard Woolf, Virginia’s husband, looms awfully large in this particular investigation. Forrester does give due consideration to the psychological traumas of Virginia’s family life prior to her marriage — most notably the suggestion that her father, after the death of her mother, leaned too heavily on her and her sister, an emotional dependency that may even have lapsed into incest — but it is her husband who bears the brunt. The gist: Virginia was ground down by an unhappy marriage, done in by “the continuous . . . fuss made over her throughout her life” and “Leonard’s constant vigilance” about her mental health.

The first foray into the realm of poor taste occurs in the opening chapter. Forrester produces epistolary evidence that Leonard was tremendously sexually uptight, in order to refute the perception, popularized in some biographies, that Virginia had been frigid with him. This might have made for an illuminating insight were it not for the boorish zeal with which the argument is hammered home over the course of a chapter of rhetorical scoffing and sneering, culminating in a remarkably confident verdict: “It seems certain that Leonard led her into sexual failure.” Aside from being uncomfortably intrusive, there is something implausible — even a little embarrassing — about this vitriolic vehemence, this bizarrely invested sense of certainty. Why the stubborn refusal to acknowledge the banal possibility that perhaps the couple were, in this respect, somewhat alike? It is as though Forrester had taken rather personally the suggestion that Virginia Woolf had not liked sex. Alas, this early skirmish is signal.

Culpability for the era’s shortcomings in the understanding and treatment of mental illness is laid at Mr. Woolf’s door, his attempts to look after his wife scornfully derided. We learn that “drinking milk, eating better, getting more sleep” are “insignificant remedies amounting to superstitions.” With her characteristic certitude, Forrester avers that Leonard “never considered asking Virginia, talking to her, listening to her.” Later on: “He must convince her that she’s very sick.” As though the man were trying, for some dark unspecified purpose, to pull off a con trick. The reality of her depression is a mere detail. The opinions of contemporaries are marginalized, and Virginia’s own testimonials of gratitude for Leonard’s solicitousness are dismissed as so much false consciousness.

Where the evidence doesn’t quite fit the thesis, it is willfully misinterpreted. Quoting from an exchange of letters between the couple in 1928, when Virginia was away on a French sojourn, Forrester takes exception to their cutesy endearments, bemoaning that the dialect is “far removed from the pages of Virginia,” before absurdly contrasting it with what she calls the “natural warmth” of her letters to the other people in her life. She dismisses their pet names as “regressive.” To be spoken to in affectionate tones is to be infantilized; to be looked after while sick is to be oppressed and dominated. We are in a nuance-free universe here.

Elsewhere, Forrester’s misplaced political zeal veers dangerously close to caricature; the campus feminist, picking fights in all the wrong places. The author Quentin Bell’s assessment that his aunt’s A Room Of One’s Own was, from a purely artistic perspective, a superior work to the more politically charged Three Guineas on account of its good humor and wit, is taken as “proof” of a gender bias in the construction of literary quality — as evidence that “indignation is denied” to women writers. It is nothing of the sort: the prosaic truth is that intense political fervor is — for better or worse — implicitly regarded as antithetical to “literary” writing, to writing “as art,” regardless of the writer’s gender. (For the aesthete, humor and wit will trump indignation every time. They are part of the currency of stylistic elegance, whereas anger is too raw a thing to be beautiful. We may quibble, but the standard is long established and gender neutral.) In a work that is replete with conjecture and half-baked speculations, perhaps the most preposterous of all is the proposition that Leonard — who, we are reminded, married upwards when he wed Virginia — mistreated his wife as some sort of projected revenge for the anti-Semitic discrimination he had endured: “He is considered marginal as a Jew? She will be considered marginal as a mad woman.”

Conversely, Leonard is simultaneously reproved for his capacity to remain socially pleasant in spite of the anti-Semitism of the day, “never sacrificing his earnest charm, his laughter, his affability . . .” Indeed, it would appear that his assimilated Englishness in general is something of an affront to Forrester. “His passion for gardening . . . might also have been a symbolic means to root himself in the English soil.” It might, I suppose; or maybe he just really liked gardening. More pertinent, for our purposes, is when Forrester quotes a jocular Leonard recalling giving a speech in a front of a roomful of psychoanalysts:

The choice of quotation is revealing. If the sensibilities displayed in this book are anything to go by, Forrester was very much a creature of the 1970s, and the specter of Freud looms accordingly large in this work. The sanguine skepticism expressed in Leonard’s quip is, by contrast, an almost quintessentially English response to the emergent charms of psychoanalysis. It is cited as evidence of an atavistic Victorian stiffness on the part of Mr. Woolf, but it actually says rather more about Forrester, locked in a cultural moment that has long since passed, where one could malign someone as a reactionary for being wary of psychoanalysis in the confident expectation of resounding cheers from the gallery. In railing, on Virginia’s behalf, against what she perceives as English bourgeois priggishness, Forrester omits one crucial consideration: Virginia was of that world; it was her home. Her status as a writer and a feminist notwithstanding.

This book is not entirely awful. The author clearly knows her subject, and when she is not grinding a political axe there are valuable insights to be garnered. These include a moving account of how, in her final months, Virginia’s solitude at the couple’s home in Rodmell, Sussex during the Second World War contributed to her final breakdown. The quietude, writes Forrester, “authorizes the past to haunt Virginia, without the former safeguard of a dazzling, public, and abundantly full life; of an audience and an array of activities that formed a barrier against certain obsessions.” One is reminded of the hapless journalist Martin Decoud in Joseph Conrad’s Nostromo, who, alone on a desert island and awaiting the return of his accomplices, is fatally engulfed in a numbing melancholia, the unbearable silence manifesting in his mind as a cord he desperately longs to snap.

Perhaps this is the very beauty of portraiture: the license afforded to the artist to represent their subject in whatever light they please. And perhaps only sarcastic hyperbole can do justice to the sense of rage against a society that all too swiftly condemned the fragile, the eccentric, and the unhappy to the single, universal category of “madness” — lacking, at that time, even a basic working lexicon for speaking about mental health. Yet one can’t help feeling that the author has taken considerable liberties to make her point: the vision of Virginia Woolf as someone who did not wield power in her relationship just doesn’t ring true. Forrester has robbed her subject of her sovereignty in order to have the pleasure of rescuing her. Such is its myopic, almost obsessive intensity that Forrester’s book is arguably best enjoyed as a work of fan fiction, its protagonist neither Virginia nor Leonard, but Viviane.

Virginia Woolf: A Portrait isn’t just a jealous, mean-spirited work. Worse than that, it feels somehow exploitative. Forrester has taken a subject of great seriousness and sensitivity and shoehorned it into a grossly reductive framework, a wearisome litany of dogmatic political gesturing. Though it was written by an author in her eighties, it is an adolescent tantrum of a book, all demonstrative animus. And noise; so much noise.
Houman Barekat is a London-based writer and founding editor of Review 31. His writing has appeared in the Times Literary Supplement, the Spectator, Frieze, the Los Angeles Review of Books, and The New Inquiry.