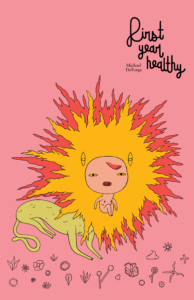 We don’t know the nature of the outburst that landed the main character and narrator of Michael DeForge’s latest graphic novel in the hospital. We don’t know how long her stay was, or even if she went there on her own accord. We do know that it wasn’t her first time, and that these outbursts have afforded her a fair amount of notoriety in the small, snowy town where she lives and works. The young woman in question, who goes unnamed throughout this short graphic novel, starts working for her brothers at a fish market upon reentering society and it is there that she begins a relationship with one of her coworkers, a man who she refers to as “The Turk.” Both are living at the margins — she with her aforementioned history of outbursts and institutionalizations and he with his status an undocumented immigrant — and it is in this space of marginality that their relationship develops. Relayed with a deadpan remove, and situated in an absurd, sickly sweet pictorial world, their dynamic progresses from a casual, playfully sexual one to one more typical of an interdependent partnership. We follow as he leads her towards and eventually leaves her with strange, dangerous people and otherworldly creatures that threaten and suck and haunt. Ironically titled First Year Healthy, this new Drawn and Quarterly release offers a puzzling glimpse into the inner world of one young woman as she traverses the icy, alienating landscape of life after rupture.

There are two realities at play in First Year Healthy, that of the young woman whose voice conveys the narrative, and that of the rich visual world in which DeForge places her. We’re listening to her tell her story, but we’re also on the outside looking in. We watch as she — a squat, bulbous lady-creature with very large reddish brown hair and invisible eyes — moves through mundane spaces warped and reimagined by DeForge’s unique spatial sense and visual language. These strikingly complex environments are rendered using a color palate made up of decaying pastels and acidic off-neons. The perspective is flattened and skewed, offering cross-sectional views that reveal whole ecosystems existing beneath the surfaces upon which the characters go about their daily business. When the fish market goes under and the main character’s new employer refuses to hire The Turk due to his citizenship status, he hooks up with a friend from the “old country” in a nearby city. He starts working in a shady underworld that keeps him out late at night and leaves him bruised and, as our main character reflects, “smelling like other people.” In the image that portrays the first meeting between The Turk and the man with a lined grey face and diamond shaped eyes who from that point on is referred to as his partner, the two men are shown standing next to each other on a grassy surface dotted with earthworms. The earthworms seem like an irrelevant detail, but contribute to a strange sense of foreboding and reflect the tonal remove with which the narrative is relayed. While the images are made up mostly of flat planes of solid color and remain devoid of the structures and objects that define real space, the bizarre minutiae that DeForge sprinkles throughout these compositions makes them feel dynamic and alive. 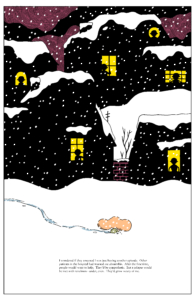 Neither the main character nor DeForge’s visual representations of her world feel logical or trustworthy, and as the plot takes a darker, more violent turn and the more fantastical elements of the story come to occupy the foreground, the reality of the events described — what actually happened and who did it — becomes more elusive. In accordance with Turkish customs, when the couple first moved into their new apartment, they left food outside their door for a holy cat to eat so that it would confer blessings onto their home. This folkloric cat, an oversized but scrawny Seuss-like creature with an unruly mane of fiery fur, first appears in the main character’s dreams and then makes its way into her waking life, watching over her as she attempts to nurse a child she inherits from one of The Turk’s former sexual partners due to a complex set of circumstances involving a deadly wolf attack. Eventually, when the weight of her responsibilities becomes too much to bear alone, the holy cat intervenes and relieves her of her duties, allowing her to rest. There’s a lot of ambiguity around what the holy cat is meant to symbolize, if it’s even meant to have a stable symbolic meaning at all. Either way, the holy cat ushers us into a freaky, fantastical dimension, offering relief from the plot’s relentless gloom.

By the end of the main character’s “first year healthy,” her partner is nowhere to be found, she has been threatened at gunpoint, and someone else’s blood has been spilt on her watch. She has realized how isolated she is from the support of a human community, and how dangerously close she is to falling through the cracks — not even we, the readers, can believe or trust her. She is saddled with the responsibility of taking care of someone else’s child in someone else’s home, with a mythical cat that materializes out of a superstitious ritual as her only ally. First Year Healthy is an imaginative take on the trying process of reintegrating into society after a mental health crisis. Much like The Turk, however, the plot draws us in only to leave us in the lurch. Luckily we have a holy cat to save us.