The Physics of Sorrow – Georgi Gospodinov 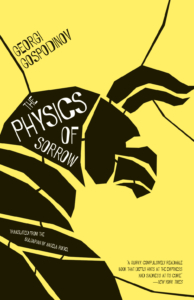 While Georgi Gospodinov’s narrator of The Physics of Sorrow expounds on his phobia of the “nightmarish question” “How are you?”, the question I fear is, “What’s it about?”, the follow-up to, “What are you reading?” From someone who has true interest in an answer, it’s an opportunity to fly into a passionate explanation of whatever aspect of the novel you’re most excited about. But, as it so often is, when it’s a polite coworker, a relative filling space in dinner conversation, or an over-friendly neighbor at the coffee shop, the question can freeze me, most especially with the books I love most, ones like The Physics of Sorrow. The casual inquirer wants to know the plot, what personal crisis the narrator faces, whether it’s sci-fi or mystery. Physics lacks an overall plot; though each section has one of sorts, it isn’t about a story. So to answer, you either find something that sounds like a plot — here, a man who has the power to enter other people’s memories and experience them, but loses it as he ages — or you risk a more accurate answer, one ripe to sound pretentious: it’s about sorrow, it’s about everything we lose in the world, the ephemeral things that seem to not matter, but when given attention, fill us with great empathy, and may be the way to most deeply connect with others. Also, it reminds you that humor makes what is sad more appealing, easier to live with.

Across nine disparate sections (plus Prologue and Epilogue), the narrator tells of his past, his family’s past (including reliving his father’s earliest memories), and his country’s, Georgia’s, past. He collects the detritus of the world and never stops; he collects people stories, all of it in an effort to find what has been passed over, what has been rejected to avoid sorrow. The lasting image for this is the story of the Minotaur. The narrator, sharing his name — and seemingly, autobiography — with the author, pulls all feelings, fears, events, back towards the Minotaur, almost in an effort to save him. The book itself is a labyrinth, and Gospodinov admits: “Some books need to be equipped with Ariadne’s thread. The corridors are constantly intertwining, crisscrossing one another.” Beautifully, changing his role from monster, the Minotaur becomes that thread.

When novels are broken into sections distinct from each other in tone, place, perspective, concept, and plot arc, they are often definable, easy to label, stylistically identifiable. That isn’t the case with Physics. It maintains a smoothness, a connectivity, even as it jumps in place and time not on something like emotional instinct, as you have often to resettle yourself, even question if the narrator is the same, before he becomes familiar again. One section focuses on his family, their past, life in a village in Georgia, and his power in occupying their memories; another the history of the Minotaur myth and his objections to them; another, time capsules; in another he’s living in a basement, only going outside at night, collecting objects; another he is traveling the world, meeting people and buying their stories, telling them to us.

It’s not so much the Minotaur myth itself that defines Physics, but Gospondinov’s objection to it. The Minotaur cannot speak, only cry Mooooo (in his attempt to cry MoooooM), cannot tell his own story. This Minotaur is a child, born to a human mother, and without any crime, condemned to live in darkness, imprisoned in a labyrinth: “We’re talking about a baby. Carried and delivered by a woman. We’re talking about an infant, not a beast.” This Minotaur’s story has been lost to a world unwilling to cope with such a tragedy, more willing to shout over his silence, and tell another story, the story of a monster, deserving his terrible fate.

For all of that, the humor can’t be put aside. Not just because laughter is such an enticing reason to read a book, but because the version of humor in The Physics of Sorrow is ingrained in its perception of life. In one of his attempts to give the Minotaur a voice, the narrator tells of the trial, with the Minotaur as defendant. He gives an anguished, poetic speech, only to be dragged out of the courtroom — all others hear is his lowing. It’s a fantastic, humorous image, but beneath it, the heartbreaking pathos: the Minotaur knows no one will understand his speech but he must cry out anyway. Other horrors hide behind jokes too. Playing as children, a friend pretends to stab the narrator with a bayonet: “I think I gave him a good scare when I dropped to the ground pale and started throwing up. It’s awful getting stabbed in the stomach with a bayonet. I barely survived.” The I is both the boy playing with his friend, and the possibility of another, of someone whose memory he entered who did actually live through such a thing.

The layers of the humor and the type of laughter vary. There are tickling times where you aren’t certain the narrator is in on the joke, if you aren’t just laughing at an oddity he doesn’t see the joke in, as in the section titled “Buffalo Shit, or the Sublime Is Everywhere.” In it, his father ponders a pile of buffalo shit, and he writes: “It was standing there like a miniature cathedral, a church’s cupola or a mosque’s dome, may all religions forgive me.” It is a sincere vision, a sincere request for forgiveness, and yet still something laughable. He means to honor the shit, not demean the religions.

The Physics of Sorrow moves between emotions and tone the same way it moves between place, time, identity: they overlap to reveal what can only be seen that way, like two pieces of colored glass placed on top of one another to form a new image:

First fumbling sex in the park.

A long half-life of exponential decay.

This is a book that reminds us there are outcasts everywhere, that the creation of a group, the telling of a story, creates outcasts, and it’s a book for those people. It’s for the people and even the things, that have been cast aside. But Gospodniov recognizes that those people are all of us, at some point or another. This is not a book for the great and lasting, but “Only that which is mortal, perishable, and fragile.” For all its strangeness, for the labyrinth that it makes itself to be, The Physics of Sorrow is not a difficult book to “get.” From early on, the ideas, the philosophy, are coherent and present. From there, unlike other books that do the same, it is not repetitive. Instead, it deepens, broadens what you’ve already understood, taking more of the world into itself. The clarity of its sorrow, the beauty of sorrow, the sorrow of beauty, become clearer, stronger, and the demand for empathy becomes undeniable.