Love Me Back – Merritt Tierce 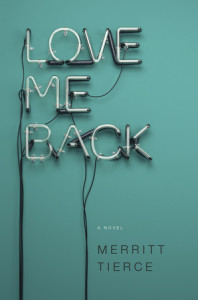 One of the things one reflects on while reading Merritt Tierce’s Love Me Back is the particular loneliness of corporate chain restaurants.

The first half of Tierce’s novel takes place in these “casual dining” establishments. Sections are titled “The Olive Garden.” “Chili’s.” Regardless of how you feel about these places, I’m willing to bet you have eaten in one, even many, along the way. Perhaps growing up.

They always seem strewn out from some once-hot gravitational center, like stars far off on a galaxy’s long spiral arm. Eating Good in the Neighborhood.

Why do these places collect such specific scorn? Perhaps because they occupy an uneasy wavelength between fast food and fine dining, but don’t fully embody either. The enforced cheer. The caloric irresponsibility of the menus. “Pieces of flair.”

I’m reminded of the woman who sang opera for diners at a Romano’s Macaroni Grill near the mall, a place I insisted on going for my birthday between ages eight and eleven (I really liked the Penne Arrabiata). She had extremely straight, middle-parted hair, muted blonde, and she never broke eye contact with us while singing.

It was always somewhat uneasy. Originating from that uncomfortable intimacy, the sense of a person there, the confrontation with someone making themselves vulnerable before you. Probably all wrapped up in a preconscious awareness of the weird intermingling of art and commerce, etc. She was a good singer.

Other things I remember about Romano’s Macaroni Grill: the tablecloths were large sheets of white paper that would give your thighs a paper cut if you weren’t careful. They were also very fun to draw on. My sister and I played a game in which one would scribble an abstract line or shape in crayon. The task of the other would be to decipher it, and using as few strokes as possible, make the shape or squiggle into something recognizable, convert the mess into order.

By the end of the evening the table would be covered in dinosaurs, strange alien architecture, cloud forms, pieces of fruit. My parents would sometimes sketch us while we ate, so we would fold the paper up and take home the little ¾ crayon portraits of ourselves and put them on our bulletin boards.

At the end of the night we were in our beds. I suppose a few hours later our opera singer was in hers.

Fundamentally, Love Me Back becomes a novel about work and love, the ecstatic or violent relation of one, and the palliative relation of the other. One is in more plentiful supply than the other.

To me, it felt like staring into the opera singer’s eyes for a long duration.

It’s a novel that feels much more like a set of connected stories — sections were first published as stand-alone pieces — and can be read in a couple of days. The electricity of the narrative is best consumed quickly.

And it takes place mainly in restaurants. Our heroine is Marie, a young mother who jumps between low-level service jobs, then lands in an upscale Dallas steakhouse.

Marie got pregnant on a mission trip in high school. She keeps her baby, and through her time in restaurants, learns to become a mother, to drink and get high, to sleep with men, to hustle and get tips.

With more people working the service industry now than ever before, and with these jobs usually providing people with little more than minimum wage, compounded by the fact that our economy is increasingly shifting toward service and hospitality — well, it all goes to say that it seems like the right cultural moment for a book like Tierce’s, a book unsparing in its cruel detail, with a woman at its center, one that demonstrates the insidious wage trap of service labor.

The book has a kind of political unconscious, I guess, but more than anything it’s meant to chronicle the psychic tolls of service. Marie becomes a good restaurant employee, but she ends up hating herself very much, and though she chases numerous forms of pleasure, there’s a striking absence of love in her life.

She goes through cycles of intense concentration of work, abstinence, then drug use, self-harm, sex. As she says of a hard-drinking customer late in the book, “The goal seems to be not so much pleasure as obliteration.”

Reference points seem to be, yes, Joan Didion’s Play It As It Lays, but recent stuff like Tao Lin’s Taipei or Steve McQueen’s film Shame also seem like thematic cousins.

These are works relentless in their desire to reveal the consumptive underpinnings of modern life. But unlike either of those, Love Me Back doesn’t claim to offer any kind of cumulative insight at the end of the tunnel. Nor does it dwell as heavy-handedly on the thematic of repetition. And, most importantly, Marie’s experience feels specific to being a woman in the service industry.

Men use Marie. She uses them, too, I suppose. And there ends up being a kind of caving out of pleasure, of all relations, in fact. Her daughter goes to live with her father. Marie is unmoored.

She trades the consistency of an addict for the compulsion of one, jumping from one thing to the next: work, sex, drugs, abuse, work, sex, etc. Men consistently mistake her compulsion for something closer to their own casual pleasure-seeking. “But it wasn’t about pleasure,” Marie acknowledges, “it was about how some kinds of pain make fine antidotes to others.”

Much has been said about Tierce’s sex writing, which, it’s true, evades the most awkward traps of the craft (craven writerly exclusion or luxuriant writerly cliché seem to be the main crimes) but the scenes of work and physical labor deserve a good look, too. Tierce, who worked in restaurants for years, has serious embedded knowledge about both the commerce and sociology of service.

Marie describes one of her co-workers:

Tanya had been halfway nice to me, in that beatup way career low-grade hospitality workers have. The ones in whom something has quit, bitterly, and then quit again, resigned…Tanya exhibited the classic mix I’ve seen in certain individuals who’ve been in the business for ten years or more: an air of woundedness, of insult, attributable to their prolonged indentured servitude, combined with an in-spite-of-it pride in the personal performance on the job.

Marie begins to inhabit that gray fog of labor that people who have worked in menial or repetitive jobs will recognize. A job can become a kind of screensaver for consciousness, a little cavity between oneself and the world, a callus, a ribcage on the outside.

This is the thing about the service industry, you can get trained to be slick and hospitable in any situation and it serves you well the rest of your life. Once you figure out that everything is performance and you bow to that, learn to modulate, you can dissociate from the mothership of yourself like an astronaut floating in space.

Such distance has costs. The book provides you with the wincing secondhand anxiety of watching someone smart you know hurt themselves, repeatedly.

Freud once said that work and love are the only things fundamental to being a human. In Marie’s case we find a degraded version of this calculation: labor and pleasure seem to add up to half a woman.

Marie fails herself again and again. And there is little redemption to compensate for that. Her actions are self-hateful, indulgent, irresponsible. Over and above all these things Tierce has made them understandable. More recognizable than the means of her self-destruction are her reasons for it. Love Me Back is a book that challenges you to be more empathetic, but not before it chastens you.

The novel traffics heavily in shame, and seems to dare readers into judgment. But while we may judge Marie as harshly as we want, Tierce has also created a space in which a person’s dignity, their entitlement to tenderness or comfort, exists beyond all transaction, even moral transaction. It cannot be squinted away.

As Marie observes of another co-worker: “It pays to hustle, it pays to bend over, we both know this. You keep your standards high and your work strong but these are necessary for success; you keep your dignity separate, somewhere else, attached to different things.”