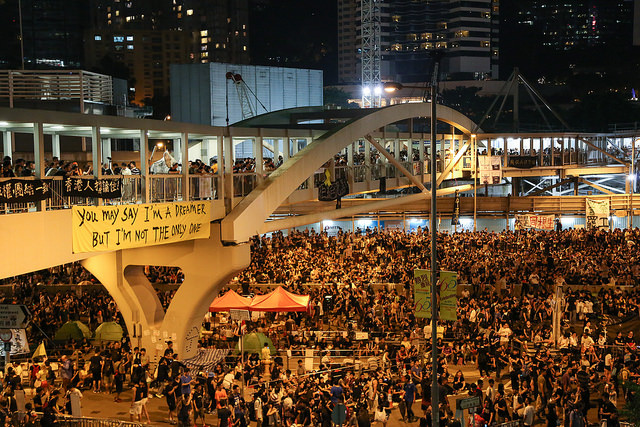 Recently I was asked what Hong Kong looks like from where I’m sitting. (I’m sitting in Shanghai.) My only answer is that for weeks Hong Kong’s now-faltering protests couldn’t be made out from the mainland much at all; the protests were never lifted into life as a full-blown news sensation, rarely surfaced conspicuously in the press, were followed by no visible solidarity demonstrations (some people expressing sympathy were quickly arrested). When the protests were squeezed into the second-rate news sections of government media sites, they were touched up with heavy dollops of condescension and slow, pained head shaking, as if written by a journo team of disappointed fathers. “Street Movement Ruins Hong Kong’s Image,” read one headline in the English language People’s Daily; “HK’s Occupy Central Protestors Urged to Reflect,” read another. On the LRB’s blog Sheng Yun wrote about a different media strategy for framing the protests. A news clip on Shanghai TV “aired scenes of the protest in Hong Kong and explained that crowds had gathered to celebrate the PRC’s National Day on 1 October.”

How many people in China even knew the protests were happening? The number was estimated early on at 10%, though perhaps eventually that changed; the protests received slightly more coverage as their numbers dwindled, a development — the dwindling numbers — not without its own violent reasons. October 4th saw the introduction of new methods to dispel demonstrators. Along with the old billows of tear gas and pepper spray, pro-Beijing supporters, some linked with the Triads, burst into Occupy zones, assaulting protesters and ripping down protest stations. Afterward 19 alleged perpetrators were arrested, but little seems to have been done to vanish suspicions that Beijing and the local government colluded with Hong Kong’s infamous criminal network: The New York Times reported “a traffic sign pointing to the local government’s headquarters in the Admiralty district was modified with a piece of paper that added: ‘and triad offices.’”

The protests initially erupted in response to Beijing’s insistence that only pre-approved candidates be allowed to run for Hong Kong’s top office. Perhaps now it’s too soon to declare them over, to rest with the mild comfort that something fleeting, thrilling, and for now seemingly marginal has reminded the world in a grand, explosive way what’s already been obvious for some time: many in Hong Kong want democracy and China will not give it to them, for fear above all that people along the periphery (Taiwan, Tibet, Xinjiang) and in the mainland will demand it too. But what seems more certain is that the threat of a massacre like Tiananmen Square, a fear bandied about hysterically across the foreign press the past several weeks, was never a likely scenario: subtler methods are preferred. At first tear gas only increased the protesters’ ranks. Then, the city’s chief executive C.Y. Leung announced “all necessary actions” would be done to clear the occupation by the morning of October 6th. On the 6th, Leung had calmed his rhetoric, but by then the effect had taken hold: the week-long National Day holidays were ending, people were returning to work, and with the threat of police action and continued thug brutality swirling ,the protests had thinned. Now, after nearly two weeks, police are in the throes of a late push to erase the protests: barricades removed; Occupy protesters arrested. As the tides have changed so has the tone in the English-language dailies. A recent article posed “a serious question: how much can Hong Kong carry on squandering?”

What to take away from the protests, which demanded alongside free elections the resignation of Chief Executive Leung? The local implications will continue to play out. Twice in recent memory Hong Kong protesters have taken to the streets and effected successful political interventions. In 2003, protests resulted in the sacking of the city’s chief executive, and in 2012 they upended plans to install PRC-inflected “patriotic” education. Will the new flurry have as immediately impactful an outcome? Perhaps not. But regardless they have played revealingly into the global constellation of Occupy protests. “Isn’t it interesting how the Occupy style protests always tend to be in the neo-liberal states touted as most successful: Turkey, Brazil, HK?” tweeted David Graeber. As with Turkey and Brazil, protesters in Hong Kong massed disparate grievances under an inclusive umbrella. (The protests were dubbed the Umbrella Revolution not for this reason, but because umbrellas were used to ward off tear gas.) Economic issues were and remain salient: rising rents, booming inequality, and a tightening economy are plaguing the city. Demands for a heightened democracy are re-positioned through this lens. The point of the protests is not just a liberal, formally pure desire for “democracy for democracy’s sake,” but a popular assertion aimed at changing policy, at transforming the realm of political and economic possibility in the city.

During Turkey’s 2013 Gezi Park protests, the conventional line in the Western press was that it was a battle for liberal rights. It wasn’t about ideology; it was about saving secular values. The argument had a lot of truth to it: the protests were about the decline of liberal rights. But what the mainstream press glided over was how ideology, as always, suffused the political climate, threading in diverse demands and competing strains of thought. Prominent among these inescapably ideological visions was a polemic against neo-liberalism.

Now in Hong Kong something similar is occurring. What people want is democracy, we’re told, and their enemy is the spectral, World War II-era nationalism resurrected by the PRC to fill the vacuum left by the disappearance or slow rusting away of actually existing Chinese state communism. Liberalism can now battle pugilistic nationalism, and it’ll be easy to figure out which side each of us is on. The point isn’t that this mainstream liberal critique doesn’t capture a fundamental feature of the protests, both in Hong Kong and Istanbul. It’s just that ideology is also very much figuring into this political space, that a complex array of sides is being described — some radically democratic, others Chinese nationalist, and still others afraid of how the city government and PRC might react to continued protests — and that democracy, liberal or otherwise, is not the end of politics, it’s the beginning.