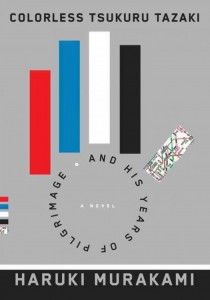 Dip your toes into a little philosophy and, before long, you’ll come across an introductory question about identity. It goes like this: you look at a picture of yourself at the age of two and you say, “That’s me.” But how could that be you? You’re not a toddler. That toddler doesn’t read essays about Haruki Murakami and identity on literary web sites. That kid lived in a different time and place than you’re living in now. You don’t share a single molecule with that kid. So you tell yourself stories. “That was me as an infant, before I went to school, fell in love, got a job . . .” Whatever story you tell, the question remains: what do you mean by “me”?

Well, names are an integral part of identity. You and that kid share a name. The rest is comprised of memories (fleeting and unreliable as those are), narratives (embellished and revised as those tend to be), and scars. When you get to this point in the thought exercise, the good questions come out. If what you are is mostly an amalgamation of memories and stories, does this mean you have agency in deciding who you are? Are cultural forces imposing themselves on these stories, forcing a race or gender or sexuality onto your “me”? Is there a core identity to “me”: a soul in the Judeo-Christian tradition, a kokoro in the Japanese one? How much of identity is genuinely individual? How much is cultural? How much is not contained within us and is part of a perpetual interchange with the universe around us? How does this all impact the most rewarding and meaningful parts of our lives: our familial relationships, our friendships, our romantic relationships, our ability to love?

It’s fun stuff to think about. It’s more fun if you don’t take it all too seriously.

Enter Haruki Murakami. Sure, he’s an international literary phenomenon, a global bestseller, and the writer most journalists mention first when the Nobel Prize announcement looms. But he’s also a guy who likes to play around with big philosophical and spiritual questions. He won’t answer them. He’ll take them seriously, but not too seriously. In a sense, he’s like my neighbor’s cat.

Indulge me for a few sentences.

My neighbor’s cat used to come by my front porch when I was out there reading. He’d sit under my chair and swat at the cuffs of my pants. He’d make whole games with my cuffs: stalking them, attacking them, biting them, nuzzling them, sleeping on them. Because I tend to wear a rugged type of pants, he’d never manage to get a thread loose. But that wasn’t his point. It’s too much to expect a cat to have a point. He’d get absorbed in the possibilities and run through the entire range of his capabilities to explore the cuff.

One cuff Murakami is swatting is this question of identity. It permeates his latest work, Colorless Tsukuru Tazaki and His Years of Pilgrimage. At the purest level, it’s a novel about a man who experiences deep emotional pain. This experience results in a fear of abandonment. He meets a woman with whom he is falling in love. In order to be part of that relationship, he has to deal with these memories of the past that have made him who he is and come out of it as who he wants to be. In other words, Colorless Tsukuru must explore his identity and come to know it well enough to rebuild it. The philosophical and the spiritual blend with a very practical question: how can I be a person in a healthy, loving relationship?

Murakami has been toying with love and identity since his earliest works. His very first protagonist — the narrator of Hear the Wind Sing, Pinball 1973, and A Wild Sheep Chase — is an enigma. He presents himself as ordinary and unremarkable. Most of his actions are quotidian. He eats omelets and sandwiches. He clips his fingernails. He drinks beer. He sits at his desk at work and doesn’t work. He plays records. He fails to finish that age-old writing workshop prompt, “You know Bob. He’s the kind of guy who . . . ” In the second two novels, he at least has a desire. In one, he’s looking for a lost pinball machine; in the other, he’s searching for a sheep with a star on its back. In Hear the Wind Sing, he doesn’t seem to want anything.

Most notably, he has no name. In Murakami’s first four books and five of his first six, his narrators are unnamed. In the Japanese, Murakami uses the first person pronoun boku instead of the more common pronouns watashi and watahashi. Boku is reserved for men and particularly young men. It doesn’t translate cleanly to English, but I wouldn’t be steering you too far off course to explain boku as the “dude” pronoun. Jay Rubin, in Haruki Murakami and the Music of Words, explains this about the pronouns and thereafter refers to Murakami’s narrator as Boku. The Dude, so to speak (though not Jeff Bridges’ version). In this way, Rubin imposes the identity that Murakami and his narrator resist. It’s a natural reaction. If people don’t show us who they are, we make up names and stories to fill in the gaps.

At one point in A Wild Sheep Chase, the narrator and his girlfriend (both unnamed) debate with an unnamed limo driver about the significance of names. It’s fairly whimsical conversation that acknowledges how much of our identities are entwined with our names. If we don’t give ourselves names, people will assign them to us. Names like “the narrator,” “the girlfriend,” and “the limo driver.” Each of these names also assigns a role. Being a narrator, girlfriend, or limo driver all comes with a number of culturally designated tasks and responsibilities. Once we’re named as such, we’re expected to perform accordingly.

Names mean something in Colorless Tsukuru. When he is in high school, Tsukuru is in a group of five friends. The other four all have names with colors in them. These colors are meaningful. They guide the characters’ personalities. In a sense, the colors are the characters’ auras (though Murakami doesn’t use this word and carry all the New Age baggage attached to it). And Tsukuru, the ordinary one, the unremarkable one, becomes colorless.

His name is nonetheless meaningful. Tsukuru is the Japanese verb meaning “to make” or “to build.” His father, when choosing the character to spell Tsukuru, selected the character for “to make or build” instead of “to create.” So Tsukuru makes and build things. Specifically, he designs railroad stations. He doesn’t create new stations. He works on stations that are already built, retrofitting them to accommodate their changing needs. If a station is experiencing greater traffic than it was designed for, Tsukuru must expand the station. If it’s experiencing a different type of service — say fewer long-distance trains and more commuter cars — he must think about how to orchestrate the movements of the passengers.

This job becomes a helpful metaphor for how we deal with our changing sense of self. That two-year-old in the picture was experiencing growth in ways that we never will again. Now, we’re grown. When we think about the changes in our lives, they all have to be within the finite sphere of our selves. How do we retrofit our narratives and our memories to orchestrate the flow of our lives? When the city or our selves experience major shifts, we can’t simply create a whole new city or self. We have to find a way to expand certain stations to deal with the change. When we fall in love, we must build a new union station or grand junction in a finite space. This often means reconciling those remote outposts that are drawing too much energy or too many resources from the system. In a sense, this is Tsukuru’s challenge.

A reader unfamiliar with Murakami has a different challenge. Most of the love stories in Western culture end, famously, in death or marriage. We’ve been so saturated with these stories that their resolutions seem to be the only natural ones. Life, as we all know, doesn’t work like that. Well, it does probably end in death. That’s the case as far as I can tell. But nothing ends in marriage. Every day in a marriage is a decision to stay married and to do the things that make marriage possible and enriching (or miserable and destructive, or all the things in between). So if the characters are going to live at the end of your love story, life tells us it doesn’t have to end with the characters getting together, or reconciling, or getting married. We have a lot of choices regarding which spot of the relationship we call an ending. Murakami likes these choices.

In other Murakami stories, he has girlfriends vanish without a trace and a narrator who doesn’t bother to look for them, or does, but without clean resolutions. He has spouses reconcile in ways that don’t seem to be reconciliations at all, or marriages come back together with so many problems that we’d need another book to work them out. He has stories begin with the marriage. He has protagonists search for lost loves and not find them. In other words, he casts aside the typical story structure and, for all his flights of fantasy, he embraces more realistic resolutions.

Knowing this adds to the joy of Colorless Tsukuru. It’s a love story that hinges not on a marriage or a death, but on a character’s ability to retrofit his identity at this station in his life with the love he is on the verge of.

For all of Murakami’s forays into the “Who am I?” question, it’s ironic that nearly every reviewer of his work defines Murakami the same way. I could summarize nearly every review written about every Murakami book after Kafka on the Shore and into the foreseeable future. It goes like this:

This latest effort has all the characteristics we’ve come to expect from a Murakami novel. It features an isolated protagonist, diversions into the metaphysical (or magical realism or fantasy), cats, jazz, a classical musician, references to American pop culture, and a quest for something that has disappeared. Murakami moves at a pace that many view as painfully slow, but somehow the prose is engaging enough to keep us reading.

This work is not as good as my favorite Murakami novel.

Murakami fans will love it. Others will be befuddled. I’m a little pissed that Murakami has gotten so popular, so I’ll find something to nitpick. Here I go…

I don’t blame the reviewers for this. Once a novelist has reached a certain level, it’s almost futile to attempt to review his or her work. What both amuses and frustrates me about the template for the Murakami reviews is how rigidly reviewers impose an identity on Murakami, as if cats and jazz and pop culture references were the things that matter most about his novels. They’re not. They decorate the novels, make them pretty and festive and fun to be inside. But the real beauty of the books, Colorless Tsukuru and all the rest, comes from the intimate relationship Murakami has with his readers. He welcomes us into his world. We get to splash around in the deep end of philosophy and spirituality. He makes us do so much of the work to keep from drowning that we find our own way to swim in those waters. We come out stronger in the end.

Sean Carswell is the author of five books. His most recent novel, Madhouse Fog, was published by Manic D Press in the summer of 2013. He is an assistant professor of writing and literature at California State University Channel Islands. You can read more by him at seancarswell.org.

The Collages of Helen Adam