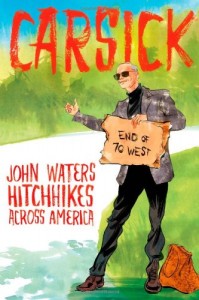 One of John Waters star Divine’s more arresting moments, along with her infamous dog-turd-eating scene in Pink Flamingos, comes in Female Trouble, where she performs a nightclub act as “the most beautiful woman in the world.” Divine’s act consists of bouncing on a trampoline, bathing in a playpen of dead fish while occasionally rubbing one against her crotch, mock-fellating a gun, and delivering a speech about the beauty of crime whose peroration ends, “I blew Richard Speck, and I’m so fuckin’ beautiful I can’t stand it myself!”

At sixty-six, John Waters has still got it — if “it” is a taste for the tasteless. He quotes his friend Brigid Berlin, the former Andy Warhol star, as saying, “How can I be bad at seventy?” Ten years since his last movie, the cult film director seems to want to remind us in his latest book, Carsick: John Waters Hitchhikes Across America, of his capacity for filth, but he is not exactly bad. The Pope of Trash himself comes off as wholesome and almost staid.

The conceit of the book does not suggest a staid hero. Waters decides to hitchhike alone from his Baltimore house to his San Francisco apartment. The trip would be adventurous enough for anyone, but it poses special challenges for the self-described “ultimate control freak,” who has by now had a few decades to adjust to the comforts of fame. Before embarking on the trip, Waters imagines the best and the worst that could happen on his trip in respective novellas. One of his assistants comments that she can’t tell the difference between the two, and it’s true that it’s not always easy to distinguish the weirdos and bizarre sexual encounters Waters deems good from those he deems bad.

Both “The Best That Could Happen” and “The Worst That Could Happen” hark back to Trash Trilogy–era John Waters: campy, disgusting, and episodic. When he gets rabies in “The Worst” I couldn’t help imagining him frothing green at the mouth like the hydrophobic Princess Coo Coo in Desperate Living. His movies are present in more direct ways, too. The sweetest vignette in “The Best” reunites him with Edith Massey, erstwhile member of his regular ensemble the Dreamlanders, whom he imagines as having faked her death to get away and open a second-hand convenience store. A driver in “The Worst” speaks to him only in dialogue from his own films — nightmarish indeed. And his inevitable death in “The Worst” comes at the hands of a deranged killer of cult-film directors. “No, Randy, please . . . Let’s go see The Avengers,” Waters begs, before noticing George Romero’s head in the back seat.

The imagined parts of Carsick probably won’t interest those who aren’t already his fans. His real experiences are, of course, far more wholesome, and he seems more wholesome in recounting them. The Guardian described Waters as “Pervert Polyanna” in its review of his book Role Models. As he struggles to find rides — even more of a feat in real life than in his imagined worst-case scenario — he is touched by the people who don’t recognize him and pick him up anyway, particularly the family men. “And yep, here’s yet one more heterosexual man who loves his wife,” he recounts in awe. “I’m telling you, it’s a trend!” He gets most sentimental over a father and son who offer to pick him up for a few miles; he declines because he’s in a good hitchhiking spot. “He understands. The son looks at me with actual kindness. Some people just are decent. They pull off and already all three of us are better people.” When he’s not writing fiction, he’s more Polyanna than Pervert.

Sometimes he even borders on prim. It’s not just the fussy tastes of someone habituated to fame, the insistence on Evian water and notoriously pricey Crème de la Mer skin cream. It’s that his sensibilities seem rather delicate for the creator of the Trash Trilogy. In a shopping mall in Denver, “I am shocked how many fat teenagers I see.” At the “abysmal” service, he sniffs, “Maybe they don’t like thin people.” One would think it would take more than fat teenagers to shock a director who oversaw the death-by-thrusting of a chicken in the course of a particularly memorable sex scene, and then ate that chicken for lunch. (Not to mention a director who featured plenty of fat leads, the aforementioned Edith Massey being one.) A paragraph after describing himself as a “filth elder,” he is again “shocked” that the men’s room at a roadside Applebee’s is “filthy.” He also admits to having “gay shame” when he encounters “old-school poofs who exaggerate the stereotype.” “I remember when Divine first saw Richard Simmons and confessed that he felt homophobic,” he says upon meeting a fictional queen in “The Worst That Could Happen.” “I can identify here.” (One wonders how Richard Simmons feels about Divine.) Again, it seems strange coming from him — John Waters is worried about gay men’s image?

For the most part, though, Waters is good company. While he counts on his fame and his two assistants in Baltimore to help him get rides and make connections, most people who pick him up don’t know who he is. One of his first rides is a twenty-year-old Republican town councilman so enamored with the adventure that he returns later to help Waters finish the trip, much to the alarm of his family. When the two check into separate rooms in a Reno hotel, Waters notes, “The hotel thinks I’ve checked in with some boy, and his parents think he’s run off with a pornographer. Plus I’m a Democrat.” If anything, Waters turns fatherly towards him, shielding his charge from the advances of a Reno doorman named Rollo.

But he still has a couple years if he wants to be bad at seventy. Maybe he can follow through on his idea for his next book: “I’ll retake every drug I ever took, in order (hash, pot, LSD, amphetamine, morning-glory seeds, glue, heroin, MDA, opium, mushrooms, cocaine) and then do bath salts?” Then again, he says, “Maybe not.”

Rachel Luban is a currently itinerant writer. She contributes to Full Stop and her work has appeared on Jezebel and the Rumpus. You can read more of her writing at rachelluban.com.