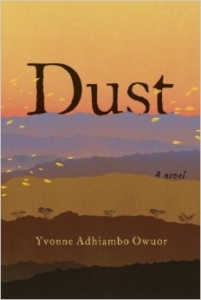 Dust, the debut novel by Yvonne Adhiambo Owuor, begins with the unexplained murder of Odidi Oganda and ends with the awakening of buried secrets, the revelation of political corruption, and the confrontation of shame-faced fears. Odidi’s sister Ajany, mourning deeply, is at the emotional center of the interconnected lives of those whose memories are stoked by the violence, whose futures seem uncertain in wake of Odidi’s death. Upon her return to their childhood home in dry, rural Wuoth Ogik and her subsequent trip to Nairobi where she investigates the mysterious circumstances surrounding her brother’s demise, she is swept up in the confusion experienced not only by herself but also by her parents, a man from England looking for his father, a policeman looking into an old case, and a seemingly omniscient trader. The most colorful and difficult of the book’s characters, though, is Kenya itself.

Descriptions of the rural landscape mirror those of the characters’ inner lives; it is barren and brittle, then gives way to wind and fire on a moment’s notice. It is bleak and thirsty, yet the roaming of animals and the straggle of strangers that pass through suggest life just outside the horizon’s reach. It is as though the land itself is reacting to the people that inhabit it, suffering their blows and matching the colors of their moods in oranges, yellows, reds and dark browns. Likewise, Nairobi is painted as ramshackle and confused, as are those who dwell within it. The depth of the book’s events is scrawled almost literally across the surface of the land.

Frequent changes in perspective, narration, and place in time play over a large swath of the country’s history, from the Mau Mau uprisings against colonialists in the ‘50s through the assassination of Thomas Mboya in 1969 and the post-election riots in 2007. These abrupt and unannounced shifts make it no easier for readers unfamiliar with Kenya’s tumultuous political history to make necessary narrative connections, but there is something refreshing about an author who expects her readers to do their own expository research. More troubling by far is Owuor’s over-persistent use of clipped or one-word sentences. Amidst promisingly evocative and image-thick prose, this kind of lengthy interjection can be a tedious distraction.

What’s happening to me?

Owuor is at her best when describing the landscape of the cavernous desert, or the sights and sounds of the crowded city. Grief and longing are familiar to each of her revolving cast, and it’s an experience she details effortlessly and with effect, though perhaps not without exaggeration. Hers are not characters that hold much back; whether it be through tears, sex, or physical desertion, their grief is exhibited dramatically and consistently. “Tremulous touch on Ajany’s face, tender, moist, warm on skin. A hard arm around her body: she is propped up by its weight. Isaiah’s head heavy against hers. Wetness slides down her neck. ‘You’re c-crying,’ she says.” Despite the arid environment, emotions are always moistness and wet, at every turn there is someone trembling tearfully.

She is not so cruel to them as to revoke the possibility of hope, yet she ultimately fails to imbibe them with any real character. They are all clear and worthy foils for different aspects of Kenyan culture, history, and myth, and as such they serve their purpose. Without strong purpose of their own, however, the power of the novel is unfortunately reduced. The things that Owuor’s characters go through and survive burn brightly in hindsight, but they themselves lack definition.

Complex story lines do eventually come together in Dust, and give a lasting impression of a country coming to terms with its own past and struggling to define its own future. Given the challenging rhythm of her prose, though, attention to detail could have inspired more confidence in the direction of the novel and more tangible personalities to miss once the final page has turned. Dust is a promising debut, and thankfully Owuor has built a creative foundation from which she has room to grow.
Emily Oppenheimer spends a lot of time with her band Total Slacker, but when it’s not a bass guitar in her hands it’s a book. Her favorite place to read is the floor of her bedroom with her pet bunny, Taco, in her lap.