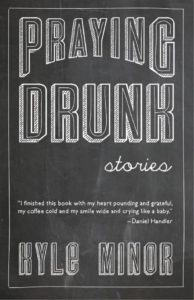 Kyle Minor has obviously made a concerted effort in Praying Drunk to bring unity and aesthetic order to what could otherwise seem just a miscellaneous collection of stories — if even calling them “stories” would give the book a nominal unity, since some of the pieces appear to have originated as essays. The first and most general sign of order comes from an author’s note in which we are told, “These stories are meant to be read in order.” If this is not sufficient admonition that we notice the book’s overall aesthetic structure, we are further told explicitly that “this is a book, not just a collection.”

At the next level, the book is divided into two sections, each with a separate title. The two sections provide for a kind of mirroring effect, as motifs, settings, and characters reappear with variations or embellishment. Finally, the stories are grouped together in even smaller sections (marked off by black pages), the stories in each section presumably echoing each other thematically or in some other way providing appropriate resonance. Two of the stories, “Seven Stories About Sebastian of Koulev-Ville” and “In a Distant Country,” stand alone in sections of their own, the two of them having in common a setting in Haiti, which contrasts with the other stories set in (mostly Southern) America.

Beyond these imposed structural arrangements, Praying Drunk is united by its general focus on its author’s own experiences (in some of the pieces a character is explicitly identified as “Kyle”) growing up and living in a downscale, religion-soaked milieu whose legacy in suffering and death is hard to escape. The first story in the book, the aptly titled “The Question of Where to Begin,” succinctly announces the book’s preoccupation: “We begin with the trouble, but where does the trouble begin?” (Although “will the trouble end” might be just as apposite a question).

Suicide is a prominent subject (particularly the suicide of a character named “Danny,” whose case is featured in several of the stories, approached from different perspectives), and a pervasive sense of regret and helplessness toward the hardships of life is probably the strongest impression the book as a whole leaves. A few of the stories are centered on events directly concerning the author (or his fictional surrogate), such as “You Shall Go Out With Joy and Be Led Forth With Peace,” about the narrator’s childhood experience of being bullied, but most of the stories take in the experiences of other characters (including family members), making Praying Drunk seem less autobiographical than an exercise in providing witness to the “trouble” endemic to American Bible Belt culture.

The book does portray the trouble in an occasionally powerful way, but finally the careful scaffolding Minor has constructed for it has the effect of muffling that power. The book is caught between the impulse to evoke the culture and struggles of the Bible Belt and what seems like a retroactive concern with aesthetic design. The motifs and echoes act as substitutes for the lengthier, more thorough development of characters and themes we might find in a novel, rather than as parts of a coherent, wholly satisfying treatment of the subject.

Paradoxically, the effort to unify the stories using these devices only reinforces the ultimate impression of the book as a miscellany. Structure is so conspicuously imported that the effect is to call attention to the fact that most of the stories are really only loosely associated by theme or setting and that the repetitions are just unavoidable artifacts of the stories’ separate publication histories. In this case, the book as a whole turns out to be less than sum of its parts because the pieces seem jammed together with an unnatural force.

The pieces that seem to most awkwardly occupy their place in Praying Drunk are those that are in fact the most self-consciously unconventional. “The Truth and All Its Ugly” transfers the suicide theme to a futuristic setting in which the father of “Danny” replaces him with a robot version following on the boy’s suicide. Suffice it to say that the substitution doesn’t work out well. As the only story in the book that substantively departs from the conventions of narrative realism, “The Truth and All Its Ugly” sits uneasily among the more straightforwardly realistic depictions of pain and suffering. It suggests that these more conventional representations are ultimately insufficient to the task while unfortunately proving much less effective than those stories, as it ultimately seems more a gimmick than an integrated contribution to the book’s overall treatment of the theme.

Two pieces, both titled “Q & A,” are structured as interviews with the author about the book we are reading, introducing a metafictional element into our consideration of the book’s aesthetic implications, but these self-reflexive interludes also make for an awkward tonal shift and seem an additional artificial reinforcement of an already artificial aesthetic design that mutes the effect of the best stories in the book — best because the least labored. At worst, this creates the impression that a strained attempt is being made to elevate the stories collected in the book beyond their actual merit.

In their way, “Seven Stories About Sebastian Koulev-Ville” and “In a Distant Country” are tonally and thematically discordant as well. Each of these stories, set in Haiti, maintains some continuity with the stories set in the U.S. by focusing on the characters who are in Haiti working as Christian missionaries, but the shift in focus from stories centered directly on Bible Belt cultural assumptions and their consequences to a focus on characters bringing these assumptions with them in their missionary work interrupts the reader’s contemplation of the former, asking us to redirect our attention to these characters’ encounter with Haitian society (and vice versa). Perhaps these stories would work better in another context, as part of a broader portrayal of the American influence in Haiti, or of Haitian history and culture more generally, but here they are more difficult to appreciate because they so abruptly seem to change the subject.

The problems with Praying Drunk are problems of structure and coherence, not of the author’s command of language. Minor’s prose style is often trenchant and direct, in a manner that suits the emphasis on missteps and misfortune, but this approach can also be rhythmically extended to become almost lyrical. The narrator of “There’s Nothing But Sadness in Nashville” describes his brother’s travails:

The real money’s in Christian rock, a scene that’s a hammerblow, every flirtation leaving him for weeks on the bean bag chairs in Murfreesboro after he’s been stiffed paychecks, accused of creepiness with underage fans, ratted out to image-conscious A & R guys. He does the same stuff everybody else does. One night he’s smoking pot with a teen pop idol while members of her entourage tryst on dingy apartment couches, the next night she’s on the late night shows talking about her virginity pledge. What sets my brother apart is he says the same things no matter who is in the room, and most people prefer what passes for the truth to what’s actually true. So he calls and says, “Enough. I quit. Enough.” No more touring, no more producing, no more engineering, no more songwriting, no more so much as sitting at the bar at Boscos with anybody wearing Diesel jeans, anybody with spiky hair, anybody with eye makeup, anybody in Nashville who’s ever been to San Francisco.

Kyle Minor’s evident writing skills at the sentence and paragraph level suggest to me that better work is to come, once he has resolved the formal uncertainties manifest in Praying Drunk. The order imposed on the stories in this book can’t conceal their marked variability of purpose, so variable that the ultimate purpose of collecting them here appears arbitrary.