How to Talk about Climate Change, Part 3: Who’s Doing the Talking?

This is the third and final post in which Stephanie Bernhard discusses the barriers climate change presents to communication and how these barriers prevent people and governments from focusing their attentions on this crucial issue. The three main themes are blame, uncertainty, and economic and racial injustice.

In my first two posts on the complexities of talking about climate change, I discussed ways to guide the climate conversation once you have someone’s attention. Should you blame big polluters, or emphasize the need for cooperation? Should you focus on predictions of a dire future, or link current weather disasters to a warming trend? These nuances matter, but only once you get someone’s attention. That’s hard to do.

For all the media attention climate change gets, it is not a sexy issue. Predictions of a water-logged world foster concern, not horror or outrage. The implications of the Keystone XL pipeline lead to shrugs, not Twitter tirades. One of my composition students broke my heart last week when she wrote in a paper that protecting the environment was just never going to be a top priority for her.

Apathy is, I think, a more dangerous enemy in the fight against climate change than denial. I defer again to New York Times blogger Andrew Revkin, who quotes Professor David Victor of the University of California, San Diego in a post on Secretary of State John Kerry’s climate speech in Indonesia. Victor writes:

The problem is not that a critical mass of people don’t believe in climate change, or even that they wouldn’t theoretically support policies to mitigate it. But very few Americans take positive action toward fighting climate change. In polls before recent elections, climate and environmental policies have ranked among the least popular reasons to vote for a candidate.

Why? How can we underscore the urgency of a threat that Kerry called “the world’s most fearsome weapon of mass destruction“? How can we grow the climate team to a size more proportional to the magnitude of the problem?

There are many answers. Some involve using appropriate rhetorical strategies, as I discussed in my last two posts. Just as important as the message, though, is where it’s coming from. Consider the three men I have mentioned so far in this post:

Do you see a theme? Now consider the scientists and activists I referred to in my first two posts:

Notice it yet? Now look at the “Voices” tab of Grist.org, an excellent environmental news site that focuses plenty of attention on climate change:

The public face of climate change activism is overwhelmingly white and overwhelmingly male, although there are, of course, some incredible women writing on climate, including Elizabeth Kolbert and Rebecca Solnit, plus a number of the younger writers at Grist, ClimateProgress, and other publications. And in social science and humanities academia, postcolonial scholars like Chandra Mohanty and Dipesh Chakrabarty are calling climate change the most urgent social justice of our time.

Things are far worse on the science side.  Thirty-three of the 38 climate scientists who signed a letter responding to a 2012 denialist column in the Wall Street Journal were men. That’s 87 percent. Thirty-six of the scientists — including all of the women — were white.

The underrepresentation of women, minorities, and minority women on the climate front is partly a symptom of larger trends in the science and journalism worlds. Women hold less than a quarter of full professorships in the sciences and make up about a third of newsrooms across the country. Things are worse for minorities, who, according to the same NSF report, hold about five percent of full professorships in the sciences and comprise just over 12 percent of full-time journalists — in a country that is about 37 percent non-white.

But even if things are bad all around, the climate beat is particularly monochrome, and particularly male. The reason is linked to the history of the environmental movement, which dates back, in this country, to nature writers and activists like Henry David Thoreau and John Muir. The anthology I use for my composition class on climate change is actually called American Earth: Environmental Writing Since Thoreau. It’s edited by Bill McKibben. A whole lot of the entries are about solitary white men going into the wilderness alone and feeling things about nature.

Some of the readings are wonderful: the descriptions are unique and precise, the men thoughtful, the calls to action moving. My students, however, despise them. Of the stack of 18 papers I just graded, a solid dozen eviscerated McKibben’s excerpt from his own first book, The End of Nature, in which he consciously emulates classic American nature writers by describing himself walking through the woods while explaining his climate change fears. McKibben says the omnipresence of climate change is ruining the good feeling he gets on his walks. My students say: why should we care? Why should we bother to change our lives, to change society, just to suit one old guy’s pleasure? They want better reasons. They want facts, evidence, predictions, a broader narrative. They want to know how the climate problem affects their lives, not just his.

That’s one of the points that Peter Kareiva makes in the “New Environmentalism” talk I referred to in my first post. His organization, the Nature Conservancy, is making impressive efforts to increase diversity among the eco-crowd by giving underprivileged kids access to nature programs in the summer. It is also researching ways to change common perceptions of environmental activists. Here’s one of Kareiva’s slides, showing a focus group interview on the topic: 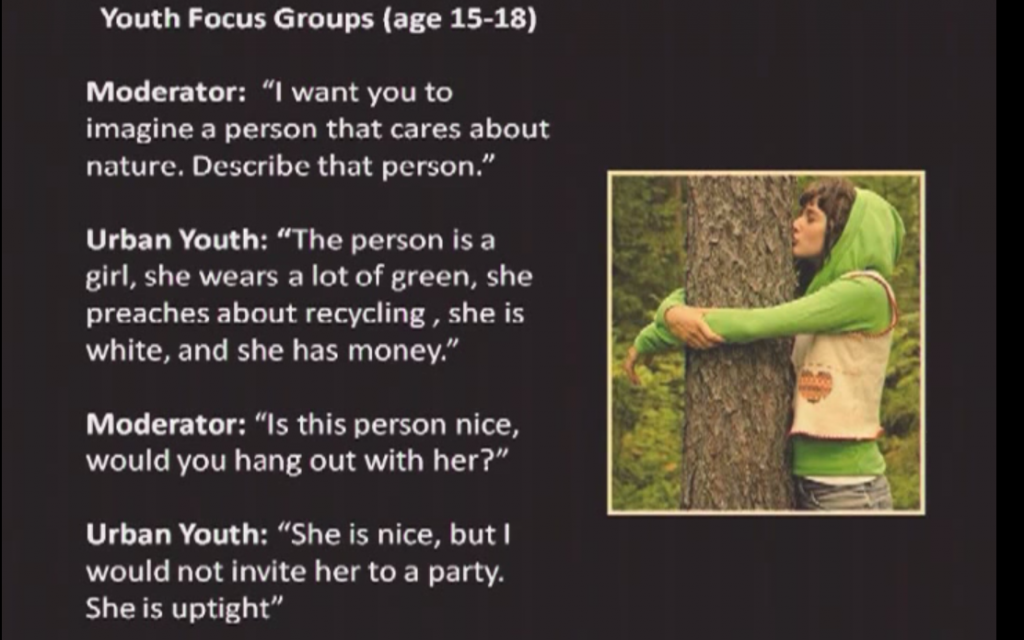 This is important information, important evidence of the problem at hand. It outlines a perception that needs to change. But describing the interviewee with the phrase “urban youth,” which Urban Dictionary smartly calls a “politically correct way to call someone black in the news,” is so bizarrely tone-deaf that it’s hard to concentrate on the merits of the study. That deafness will probably persist as long as white men are doing the vast majority of the talking. People will not pay attention to a message that is obviously not spoken in their language and not directed toward them.

So we need more languages. We need more women and more people of color to be studying, thinking, writing, and speaking about climate change. The stakes are high. Many reports have shown that  climate change will have more damaging impacts on women globally, and on low-income and minority communities in this country. Consider what happened after Hurricane Katrina: the communities with the fewest resources suffered the most and received the least satisfactory aid.

People have historically been willing to fight for environmental issues that are currently affecting them, as I wrote in my post last week. Grist’s Brentin Mock recently wrote about the twentieth anniversary of Executive Order 12898, which “requires all federal agencies to consider impacts on people of color in their regulations and rulemaking.” The order was the happy result of activism by a number of minority communities that were sick of discovering that their neighborhoods had become the site of a dirty power plant or toxic dump.

Those were current, local issues. The next challenge is to make people care about future issues — specifically, the future damages that a changing climate will bring. The will to change is there, as Mock’s story shows. So is the political support: a 2010 study by the Yale Project on Climate Change shows that minorities are often more likely to support sustainability initiatives than whites. Only the stories are missing, and specifically the storytellers who can make climate change matter to the people whom it will affect — which is to say, everyone.

If the climate’s current spokesmen really want to see true, positive change in the way the public understands climate change, they need to step aside and let someone else do the speaking.